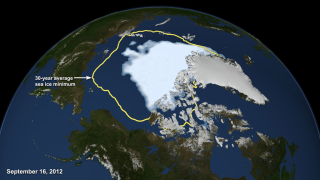 This item is part of this series:
Arctic Annual Sea Ice Minimum with Graph Overlay