Download Options
Before MAVEN entered its final science-mapping orbit, it observed carbon, oxygen, and hydrogen at varying altitudes above Mars. The heavier carbon and oxygen atoms cling tightly to Mars, while hydrogen atoms extend far above the planet. 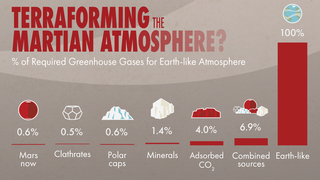