Visualizations by Alex Kekesi Released on September 6, 2019
Download Options
Snapshot view of 3D precipitation from DPR and surface rain rates (mm/hr) from GMI at 10:41 UTC (6:41 am EDT) 4 September 2019 when the center of Dorian was near the coast of central Florida about 90 miles due east of Daytona Beach.
This video is also available on our YouTube channel. 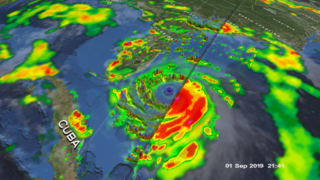 9/4/2019
Credit:
Data provided by the joint NASA/JAXA GPM mission.
view all stories where this data set is used

Data Compilation - NASA/GSFC - 9/3/2019 - 9/4/2019
http://pmm.nasa.gov/sites/default/files/document_files/IMERG_ATBD_V4.4.pdf
view all stories where this data set is used
Note: While we identify the data sets used in these visualizations, we do not store any further details nor the data sets themselves on our site.