Visualizations by Tom Bridgman Released on March 15, 2017
Download
This visualization opens with a full view of the radiation belt of trapped electrons circling Earth. We open a slice of the belts, to display a cross-section for clarity and move the camera to a more equatorial view. Earth rotation and solar motion have been turned off for this visualization to reduce distracting additional motions. 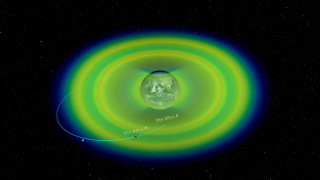 Data Used:
Van Allen Probes/Energetic Particle, Composition, and Thermal Plasma Suite 2015-03-01 to 2016-06-30
Note: While we identify the data sets used in these visualizations, we do not store any further details nor the data sets themselves on our site.