Released on September 15, 2016
Download Options
LEAD: NASA and the National Snow and Ice Data Center report that the Arctic sea ice minimum ties that of 2007 as the second lowest of the 38 year satellite data record.

TAG: Since 1978 researchers have observed a steep decline in the average extent of Arctic sea ice for every month of the year. 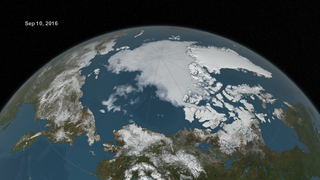