Released on August 14, 2013
Download Options
A meteor weighing 10,000 metric tons exploded only 23km above the city of Chelyabinsk in Russia on Feruary 15, 2013. Unlike previous such events, this time scientists had the highly sensitive OMPS instrument on NPP to deliver unprecedented data and help them track and study the meteor plume for months. This video shows how accurately the model prediction coincided with the satellite observations. 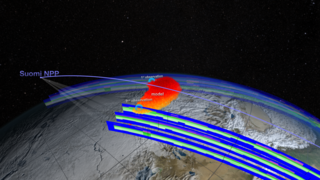