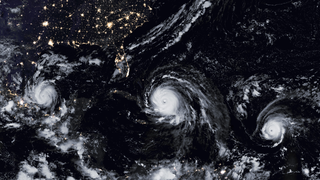 Data Used:
IMERG 2017
CPC (Climate Prediction Center) Cloud Composite 2017
Hurricane/Tropical Data 2017
GTOPO30 Topography and Bathymetry
Note: While we identify the data sets used in these visualizations, we do not store any further details nor the data sets themselves on our site.

This item is part of these series:
Hurricanes
NASM2017