Download Options
A computer model simulation of spicules. Spicule-like features appear as dense, cool intrusions in the hot corona, originating from the boundaries of the strong magnetic regions. (A/top half of video) Temperature and (B/bottom half of video) density maps are shown on a logarithmic color map with white magnetic field lines (A) and black contours where plasma β = 1 (B). t, time. 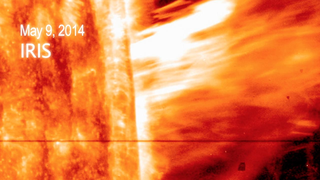