Visualizations by Kel Elkins Released on July 16, 2020
Download Options
This visualization shows the ICESat-2 and Cryosat-2 satellites just after Cryosat-2 has adjusted its orbit to allow for periodic coincident measurements. The camera starts at a global scale, then zooms in to see ICESat-2 ground tracks. About two orbits later, we see Cryosat-2 pass over a portion of the same track. Time speeds up and we see how these coincident measurements happen frequently. 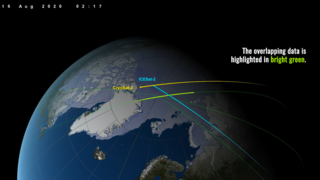 Ephemeris
view all stories where this data set is used
Note: While we identify the data sets used in these visualizations, we do not store any further details nor the data sets themselves on our site.