Visualizations by Greg Shirah Released on August 17, 2020
Download
South Atlantic Anomaly from 2015 through 2025 showing the geomagnetic intensity at the Earth's surface and the core-mantle boundary. There are versions that include the dates and colorbars and versions without the date and colorbat.
This video is also available on our YouTube channel.

Download
Geomagnetic intensity color bar for the Earth's surface. Colors range from purple to gray to orange with a data range of 27300 to 82500 nanoteslas (nT)

Download
Geomagnetic intensity color bar for the core-mantle boundary. Colors range from purple to gray to orange with a data range of 0 to 1000000 nanoteslas (nT)

Download
Isoline bars that are mapped with the colorbar
Download
Date overlay sequence from 2015 to 2025 with frame numbers that correspond to the other layers. 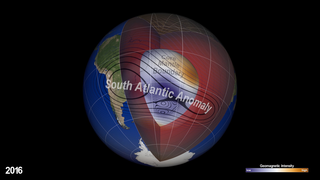 Data Used:
GTOPO30 Topography and Bathymetry
Terra and Aqua/MODIS/Blue Marble: Next Generation
CM6 geomagnetic field model and GEMS assimilation system 2015-2025
Note: While we identify the data sets used in these visualizations, we do not store any further details nor the data sets themselves on our site.