Visualizations by Ernie Wright Released on April 30, 2019
Download
This animation shows the Moon's umbra shadow as it passes over Chile and Argentina during the July 2, 2019 total solar eclipse. Through the use of a number of NASA datasets, notably the global elevation maps from Lunar Reconnaissance Orbiter, the shape and location of the shadow is depicted with high accuracy. 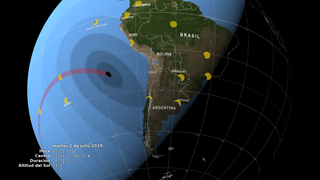 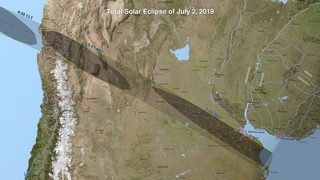 Data Used:
LRO/SELENE/LOLA/TC/DIgital Elevation Model
JPL DE421
LRO/LOLA/Digital Elevation Map
Terra and Aqua/MODIS/Blue Marble: Next Generation
SRTM/SIR-C/DEM
Note: While we identify the data sets used in these visualizations, we do not store any further details nor the data sets themselves on our site.