Released on May 2, 2022
Download Options
Learn more about the best-known black hole systems in our galaxy and its neighbor, the Large Magellanic Cloud. This visualization presents 22 X-ray binary systems that host confirmed black holes at the same scale, with their orbits sped up by about 22,000 times. The view of each system reflects how we see it from Earth. Star colors ranging from blue-white to reddish represent temperatures from 5 times hotter to 45% cooler than our Sun. In most of these systems, a stream of matter from the star forms an accretion disk around the black hole. In others, like the famous system called Cygnus X-1, the star produces a hefty outflow that is partly swept up by the black hole’s gravity to form the disk. The accretion disks use a different color scheme because they sport even higher temperatures than the stars. The largest disk shown, belonging to a binary called GRS 1915, spans a distance greater than that separating Mercury from our Sun. The black holes themselves are shown larger than in reality using spheres scaled to reflect their masses.

Download Options
This animation compares the largest system, GRS 1915+105, discovered in 1992, with its diminutive cousin H1705-25, discovered in 1977 when it erupted as an X-ray nova. Their black holes are thought to weigh, respectively, 15 and 7 solar masses. The accretion disk of GRS 1915 may extend more than 50 million miles (80 million kilometers), greater than the distance separating Mercury from the Sun.

Download Options
This animation depicts a fanciful flight past several of the visualized black hole systems, including Cygnus X-1 and GRS 1915. 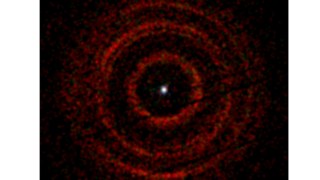