Released on December 4, 2019
Download Options
Image #1: First results from NASA's Parker Solar Probe show flips in the direction of the magnetic field, which flows out from the Sun, embedded in the solar wind and detected by the FIELDS instrument. During a switchback, the magnetic field whips back on itself until it is pointed almost directly back at the Sun. These switchbacks, along with other observations of the solar wind, may provide early clues about what mechanisms heat the solar corona and accelerate the solar wind.

Download Options
Image #2: Flips in the Sun's magnetic fields — dubbed "switchbacks" — appear to be a very common phenomenon in the solar wind flow inside the orbit of Mercury, and last anywhere from a few seconds to several minutes as they flow over NASA's Parker Solar Probe during its first year in orbit. Yet they seem not to be present any further from the Sun – we would have no way of spotting them without flying directly through that solar wind the way Parker has. 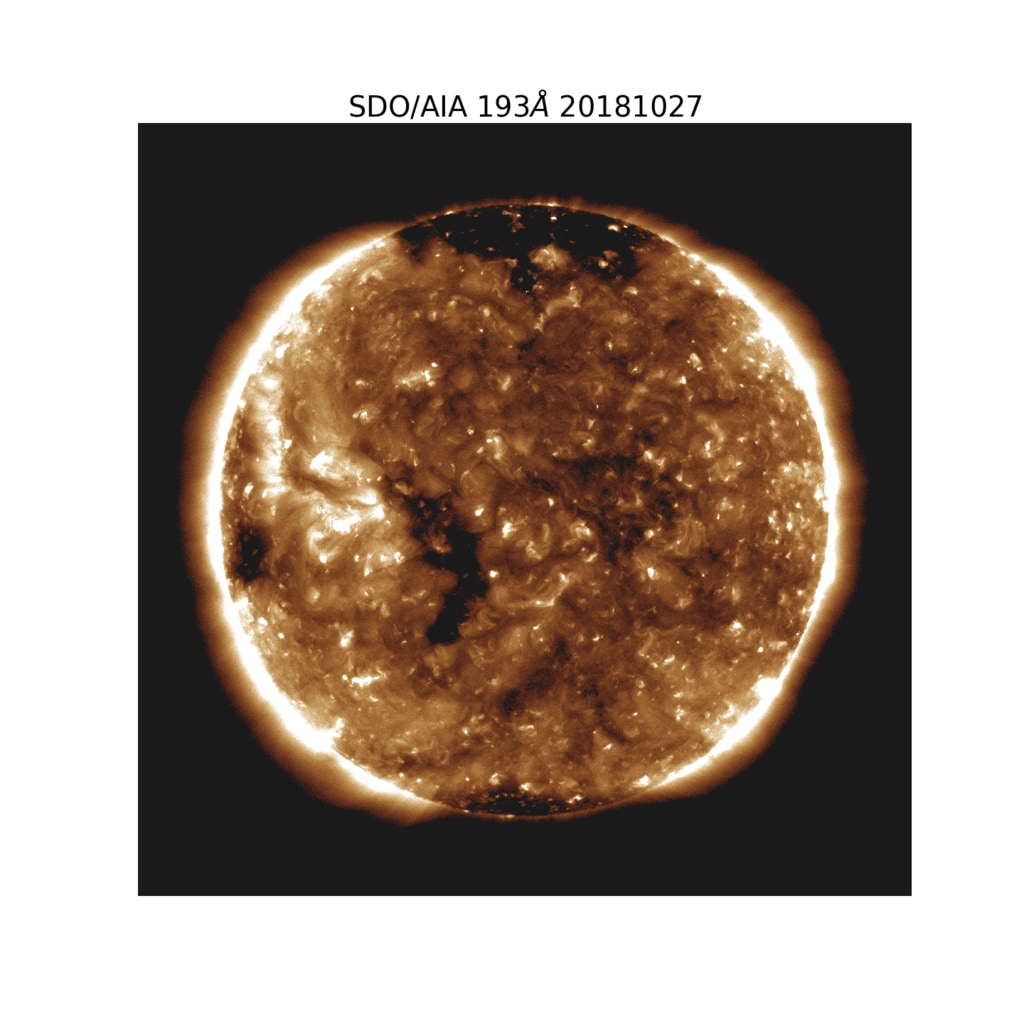 Download Options
Image #3: NASA's Parker Solar Probe observed a slow solar wind flowing out from the small coronal hole — the long, thin black spot seen on the left side of the Sun in this image captured by NASA's Solar Dynamics Observatory — on October 27, 2018. While scientists have long known that fast solar wind streams flow from coronal holes near the poles, they have not yet conclusively identified the source of the Sun's slow solar wind.

Download Options
Image #4: This movie shows six years of observations of the Sun as observed by NASA's Solar Dynamics Observatory. Solar particles outline loops on the horizon, illustrating the constant dance of the Sun's magnetic fields.

Download Options
Image #5: The WISPR instrument on NASA's Parker Solar Probe captured imagery of the constant outflow of material from the Sun during its close approach to the Sun in November 2018.

Download Options
Image #6: The WISPR image on NASA's Parker Solar Probe captured imagery of the constant outflow of material from the Sun during its close approach to the Sun in April 2019. 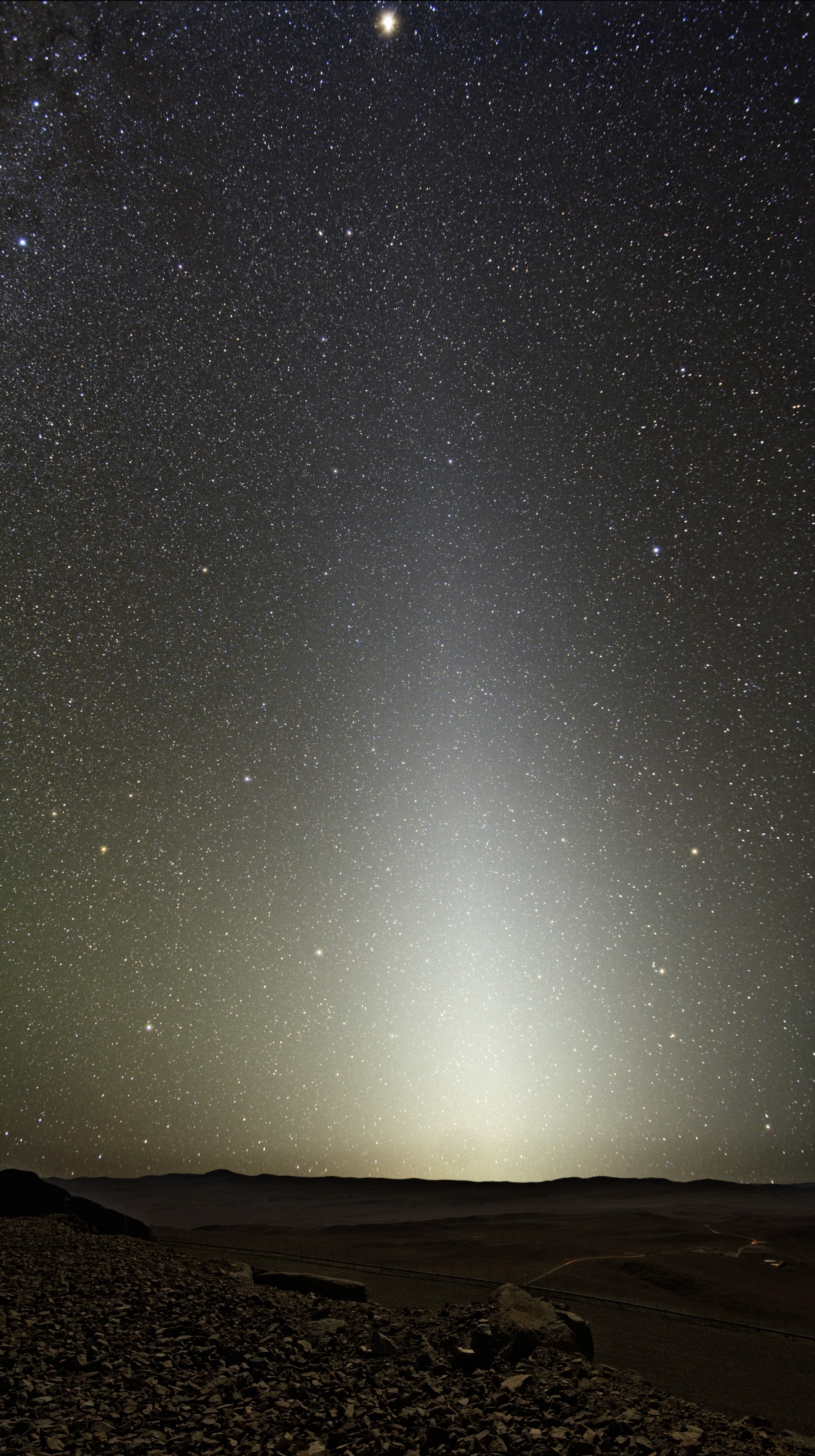 Download Options
Image #7: The Sun is surrounded by a ring of dust, made of the cosmic crumbs of collisions that formed planets, asteroids, comets and other celestial bodies billions of years ago. On clear nights, observers from Earth can see a hint of this dust — known as Zodiacal dust or "false dawn," — as a concentrated illuminated cloud appearing over the horizon, scattering the Sun's light back to us in the dark. New results from NASA's Parker Solar Probe have observed for the first time the way the dust begins to thin out near the Sun, evaporating in the intense heat. As Parker gets closer it may well see the dust disappear completely.

Download Options
Image #8: Artist interpretation of a dust-free zone around the Sun.

Download Options
Image #9: Parker's ISOIS energetic particle instruments have measured several never-before-seen events so small that all trace of them is lost before they reach Earth. These instruments have also measured a rare type of particle burst with a particularly high ratio of heavier elements — suggesting that both types of events may be more common than scientists previously thought. Solar energetic particle events are important to understand as they can arise suddenly and lead to space weather conditions near Earth that can be potentially harmful to astronauts. Unraveling the sources, acceleration, and transport of solar energetic particles will help us better protect humans in space in the future. 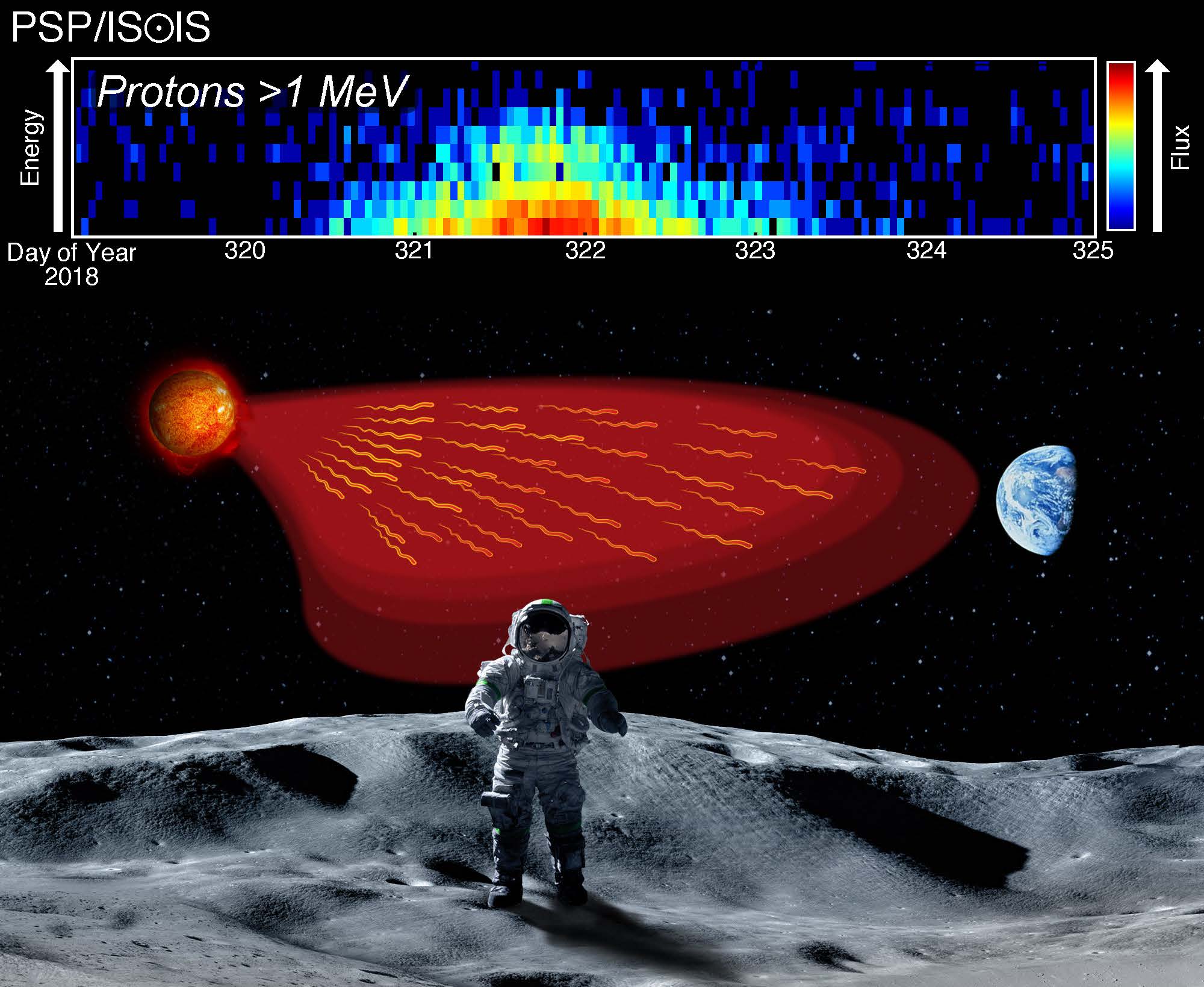 Download Options
Image #10: One of the greatest threats from the Sun — to astronauts and the satellites that provide GPS maps, cell phone service, and internet access — are high-energy particles that erupt from the Sun in bursts. Top: On Nov. 17, 2018 — the 321st day of that year, as seen on the bottom axis — the ISʘIS instrument aboard NASA's Parker Solar Probe observed a burst of high-energy protons, each with more than 1 million electron-volts of energy. The warmer colors (yellow, orange, red) represent an increase in the number of these high-energy particles hitting the ISʘIS sensors. (Time in days is given on the horizontal axis, and particle energy on the vertical axis.) Bottom: An artist’s representation of one of these energetic particle events.

Download Options
Image #11: During Parker Solar Probe’s first two orbits, ISʘIS detected many small energetic particle events, solar bursts during which the rates of particles streaming out of the sun increased rapidly. On ISʘIS, the Epi-Lo instrument measures particles in the tens of thousands of electron-volts, while Epi-Hi measures particles with millions to hundreds of millions of electron-volts. (For reference, the electricity in your house is 120 volts.) Here, data from orbits 1 (left) and 2 (right) show the ISʘIS particle count rates overlaid as color strips along the black line that represents the trajectory of Parker Solar Probe. The lower energy (“Lo”) rates can be seen on the inside of the track, while the higher energy (“Hi”) rates run on the outside of the track. Both the width and color correspond to the measured rates, such that large red bars indicate the biggest bursts, when the sun released the most particles in a short amount of time. 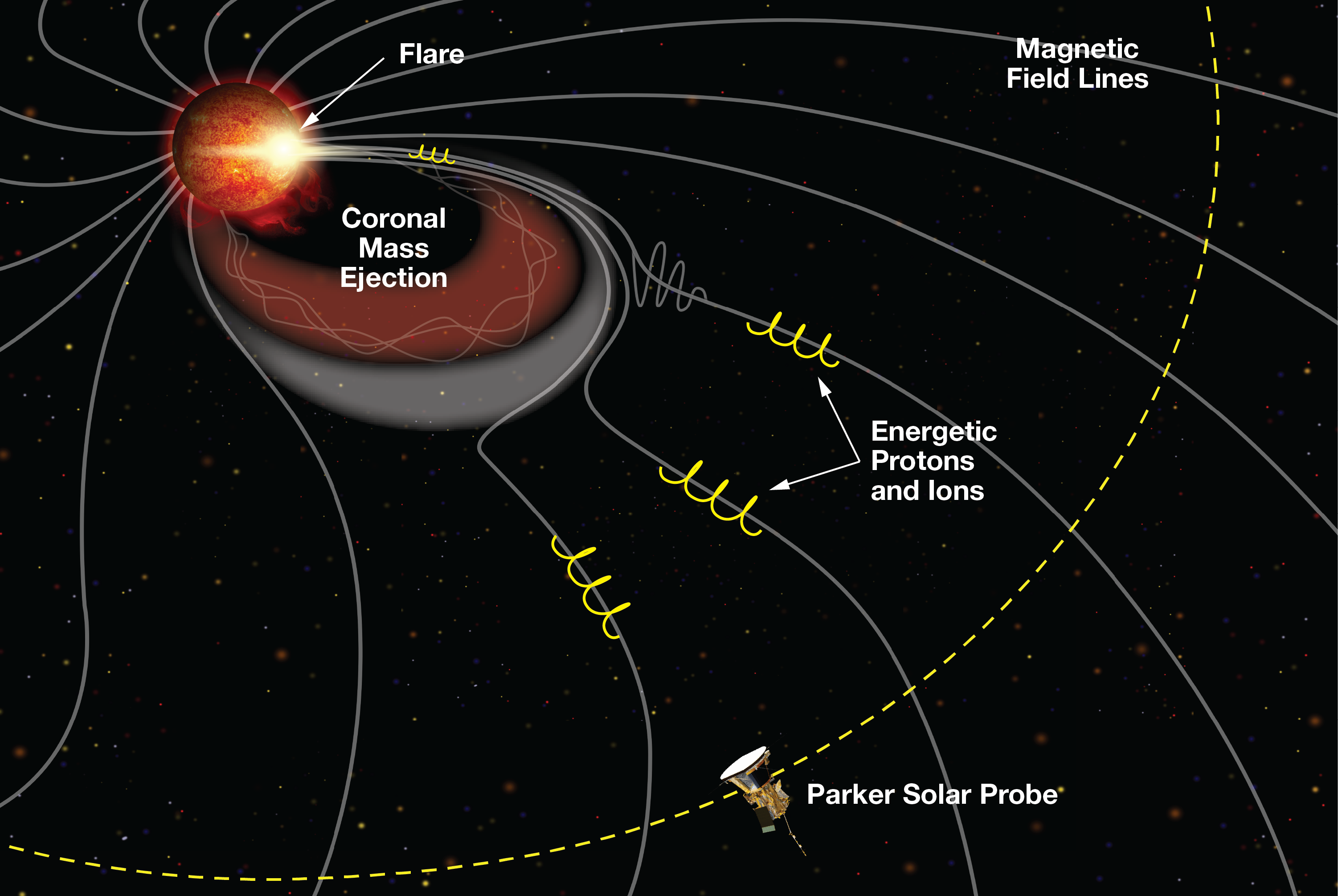 Download Options
Image #12: The top panel shows a schematic of a Coronal Mass Ejection (CME), during which a burst of material with as much mass as Lake Michigan is ejected from the Sun. These can pose a threat to astronauts and space satellites, but ISʘIS scientists discovered that tiny energetic particles rush ahead of the ejected mass, providing advance warning of the incoming threat. 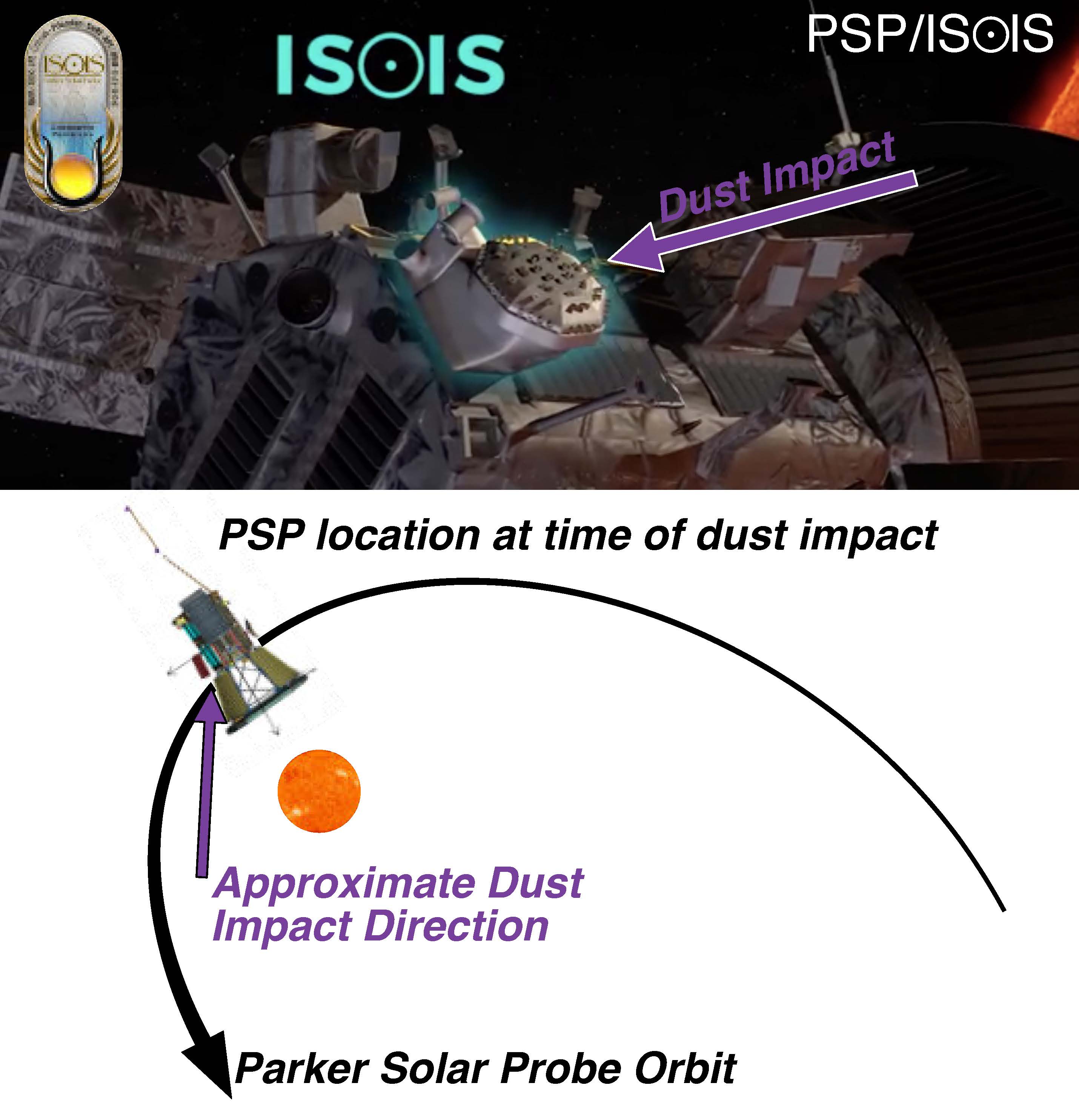 Download Options
Image #14: On Epi-Lo, 80 tiny telescopes are looking in 80 different directions, and one of those was punctured by a dust grain when Parker Solar Probe was at its closest approach to the sun. The purple arrow shows the approximate arrival direction of the dust grain, and the bottom panel shows where during the second orbit collision occurred. 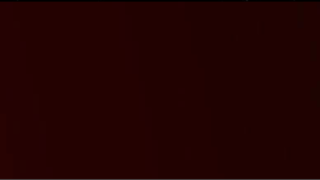 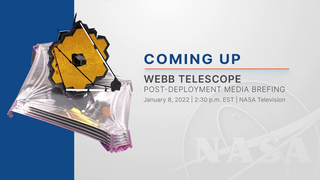