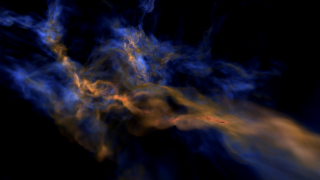 Please give credit for this item to:
NASA/Goddard Space Flight Center and the Advanced Visualization Laboratory at the National Center for Supercomputing Applications, B. Robertson, L. Hernquist

For usage permission, please contact Donna Cox at the Advanced Visualization Laboratory at the National Center for Supercomputing Applications, University of Illinois. Thank you.