Released on January 15, 2009
Download
As the star explodes, the narrow beam (white) of gamma rays is emitted first, followed by the wider beam (purple). 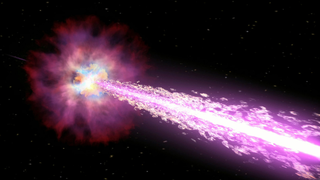 Please give credit for this item to:
NASA/Swift/Cruz deWilde

Data Used:
Fermi/LAT
Swift
Note: While we identify the data sets used in these visualizations, we do not store any further details nor the data sets themselves on our site.