Visualizations by Trent L. Schindler Released on December 13, 2021
Download Options
The team focused on dropping levels of nitrogen oxides, or NOx, which are emitted largely from power plants and car exhaust. It also reacts to form surface-level ozone – an invisible contributor to smog and a harmful pollutant to human health.

At the country scale, the evolution of NOx emission reductions over time is strongly correlated with the COVID-19 Government Response Stringency Index, an indicator of the severity of government lockdown measures to slow transmission of COVID-19.

Chinese NOx emissions rapidly declined from late January through late February, corresponding to China’s first lockdown. This was followed by a rapid recovery to their normal levels for March and April. In May, the emissions again started to decrease corresponding to a second lockdown in some parts of the country.

In Italy, the early implementation of lockdown led to large emission reductions before other European countries, from late February to early May.

Most of the states in the United States announced emergency stay-at-home orders in late March. The estimated emissions show declines beginning in late February and early March, with maximum reductions of about 25% in April and May, followed by a moderate recovery in June.

The team found that, globally, emissions of NOx decreased 15%.

To identify regional and seasonal changes in the ozone response, the team conducted model simulations for each region separately. For each model simulation shown here, only the NOx reductions for that region were used, leaving the rest of the globe at the status quo. This allowed the investigators to avoid seeing overlapping effects from more than one region at once.

Ozone production from NOx is most efficient in the tropics because of warmer and sunnier climate.

The South American emission reductions result in a long tail of decreased ozone along the mid-latitude westerlies in the Southern Hemisphere.

The European and Australian emission influences on ozone are mostly limited to the region poleward of 30°, linked to the movements of large air masses, like cold or warm fronts, that scale thousands of miles.

Overall, the lockdowns in the northern midlatitudes had the largest impact on ozone concentrations because reductions in NOx emissions were largest there.

Download Options
This is an alternate version of the previous visualization, using a data range of 5ppb rather than 2ppb.
Download Options
The team looked at the lockdowns’ impacts on global ozone pollution in the troposphere—the lowest layer of the atmosphere, from the surface to about 40,000 feet (roughly were passenger jets fly). As opposed to the protective ozone layer in the stratosphere (the layer above the troposphere), the troposphere ozone is an important greenhouse gas.

NASA satellites showed that the drop in NOx resulted in a 2% global drop of ozone. While this may seem small, this drop in ozone, which occurred over 8 months, would take 15 years to achieve under even aggressive emission control scenarios.

Ozone depends on a number of factors and not just NOx emissions alone, which is why the team pulled together a variety of air quality measurements and combined them with a model to understand what happened.

Download Options
Asian emissions show a distinct pattern, with large ozone reductions in the upper troposphere around 40,000 feet extending throughout the tropics and to the mid latitudes of both hemispheres.

This pattern reflects how in the tropics warm air rises to higher altitudes and spreads north and southward, and also how it is transported by the Asian monsoon. The results suggest human activity in Asia has a substantial impact on the global environment.

Meanwhile, reduced lockdown emissions in North America reduced ozone up to about 40,000 feet from the ground farther northward, widely over the northern mid and high latitudes into Canada, Europe and the Arctic.

The movement of the signal of reduced ozone levels from Asian and North American emissions also has implications for ozone’s heat-trapping ability as a greenhouse gas. Ozone has the 3rd largest impact on the radiative balance of the atmosphere. 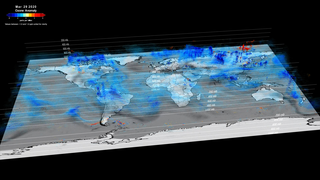