Visualizations by Greg Shirah Released on July 28, 2017
Download
Flying down the Helheim Glacier in Greenland as ATM altimetry date is shown - first with data from 1998 then data from 2013 is added
Download
ATM and DMS data from 2013 near the calving front
Download
Rotate around particle representation of ATM data 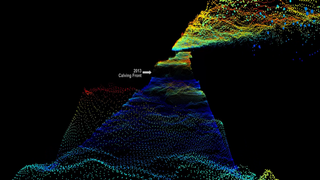 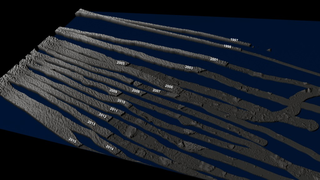 Observed Data - 1998
http://nsidc.org/data/BLATM1B/versions/1
view all stories where this data set is used

Observed Data - 2013
https://nsidc.org/data/docs/daac/icebridge/ilatm1b/
view all stories where this data set is used

NASA Ames Airborne Sensor Facility (DMS), Fireball International Services Corp., Cirrus Digital Systems - 1998, 2013
view all stories where this data set is used
Note: While we identify the data sets used in these visualizations, we do not store any further details nor the data sets themselves on our site.

This item is part of this series:
Operation IceBridge