Visualizations by Horace Mitchell Released on January 23, 2017
Download Options
This visualization combines precipitation data from the Global Precipitation Measurement (GPM) mission's Integrated Multi-satellitE Retrievals (IMERG) and water vapor data from Goddard Earth Observing System Model (GEOS) . Together, they allow scientists to study atmospheric rivers and the heavy precipitation they bring to California.
This video is also available on our YouTube channel.
Download Options
A global view of the IMERG precipitation and GEOS water vapor in the first half of January 2017. Note that atmospheric river events occur not just in California, but all over the world in the mid-latitude regions. 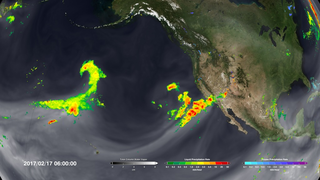 Data Compilation - NASA/GSFC - 1/1/2017-1/14/2017
http://pmm.nasa.gov/sites/default/files/document_files/IMERG_ATBD_V4.4.pdf
view all stories where this data set is used
Note: While we identify the data sets used in these visualizations, we do not store any further details nor the data sets themselves on our site.