Visualizations by Horace Mitchell Released on December 9, 2016
Download Options
This visualization starts by showing carbon dioxide values (colored squares) being measured by the OCO-2 sensor. Soon the total carbon dioxide from the GEOS global atmosphere simulation is shown under the OCO-2 data. Every six hours, the OCO-2 measurements are used to adjust the GEOS simulation values to agree with observed values at those locations, a process called data assimilation. In order to see this process, look for locations where OCO-2 values are shortly followed by local changes in the background data. Carbon dioxide is shown in parts per million by volume (ppmv).
This video is also available on our YouTube channel.

Download Options
The color scale for carbon dioxide values in the visualization. 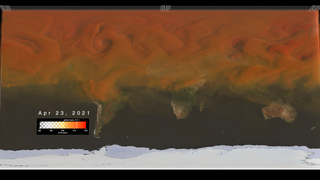 Model - GMAO - 9/1/2014-8/30/2015
view all stories where this data set is used
Note: While we identify the data sets used in these visualizations, we do not store any further details nor the data sets themselves on our site.