Download Options
This animation starts with an overview of North America, Central America, and the Caribbean. As the camera slowly pushes in, Hurricane Matthew begins to form. By the morning of October 2nd, 2016 Matthew is a Category 4 Hurricane immediately south of Haiti and the Dominican Republic. Time then slows down to see GPM's GPROF swath reveal ground precipitation from the hurricane. Now, with the camera closer in the view rotates to reveal a curtain of 3-dimensional radar data from GPM's DPR instrument. DPR shows the 3-D structure of the hurricane's precipitation rates. Areas in blue and purple are frozen precipitation, whereas areas in greens and reds are liquid precipitation. The data for October 2nd then fades away and the hurricane advances to October 3rd, stopping over Haiti. A new satellite pass of GPM GPROF ground precipitation is revealed, followed by a new curtain of 3-D DPR data.
Download Options
This visualization is the same as above except without colorbars and dates overlayed. (Useful for broadcasters who wish to organize the annotation layout differently.) 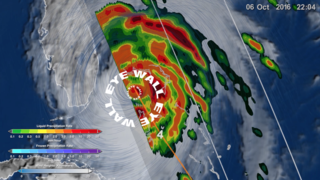 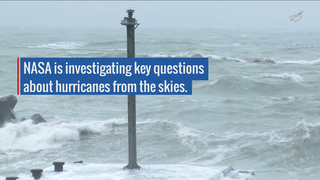 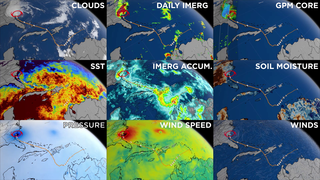