Gardening Rates on the Moon

Visualizations by Ernie Wright Released on October 13, 2016
Download
After simulating the distant view of a new impact, the camera zooms up to the surface to show actual before/after images of a new 12-meter crater taken by the Lunar Reconnaissance Orbiter narrow-angle camera. (The impact that formed this crater wasn't seen from Earth, but a different one was.) 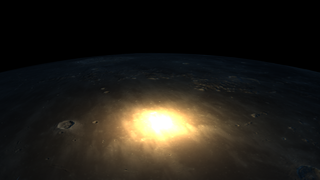 Data Used:
LRO/LROC/Narrow Angle Camera
LRO/LOLA/Digital Elevation Map
LRO/LROC/WAC 643nm High Sun Global Mosaic
Lunar Reconnaissance Orbiter/Wide-Angle Camera/Global Morphological Map
Note: While we identify the data sets used in these visualizations, we do not store any further details nor the data sets themselves on our site.