There is a newer version of this story located here: https://svs.gsfc.nasa.gov/4558 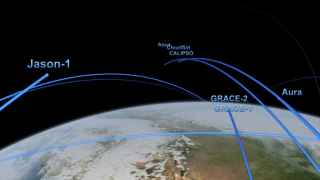 Data Used:
Terra and Aqua/MODIS/Blue Marble: Next Generation
CelesTrak Spacecraft Orbit Ephemeris 02/2010
GEOS-5 Atmospheric Model on the Cubed-Sphere 02/02/2010 though 02/22/2010
Note: While we identify the data sets used in these visualizations, we do not store any further details nor the data sets themselves on our site.

This item is part of this series:
NCCS Dedication 2010