Visualizations by Lori Perkins Released on March 13, 2008
Download Options
This movie shows a three day moving average of anthropogenic aerosols over the Pacific in 2003. Human population is shown in blue/purple. On May 9, 2003 a heavy pollution plume is being transported over the Pacific from Asia to North America.
Download Options
This movie shows the same three day moving average of particulate pollution optical depth and human population. It does not have the date overlaid. 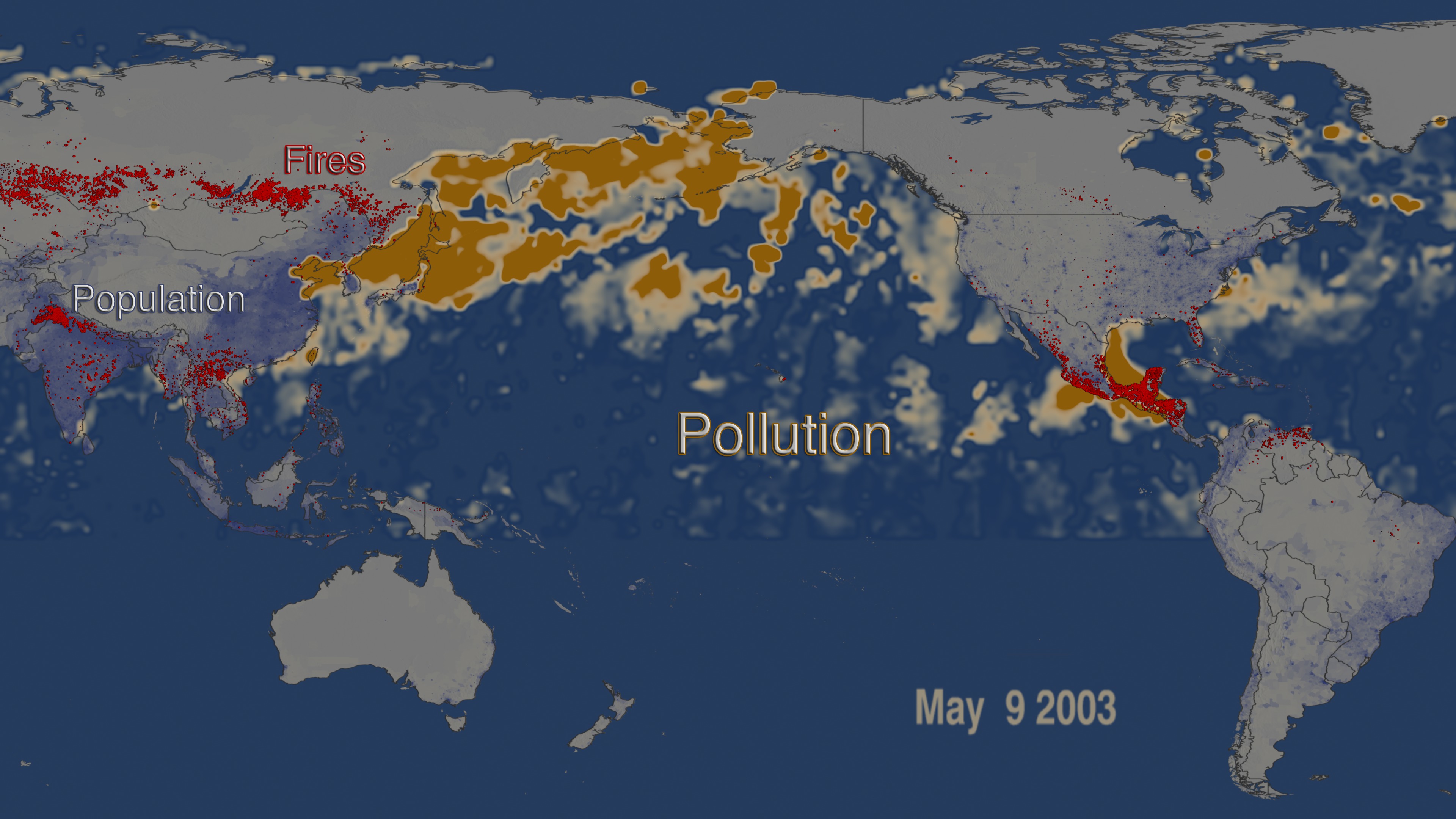 Download Options
In this picture, heavy aerosol concentrations appear in shades of brown, with darker shades representing greater concentrations. Areas of purple on the land surface represent human population. Notice how heavy aerosol production and dense population areas correspond. Also notice how there are dense patches of red points in East Asia. These correspond with intense forest fires, sending vast quantities of aerosols into the atmosphere. Although this image gives the impression that the fires and plumes of aerosols may not be connected, in fact they are. There's a direct relationship between those fire point and the brown patches appearing to the East. 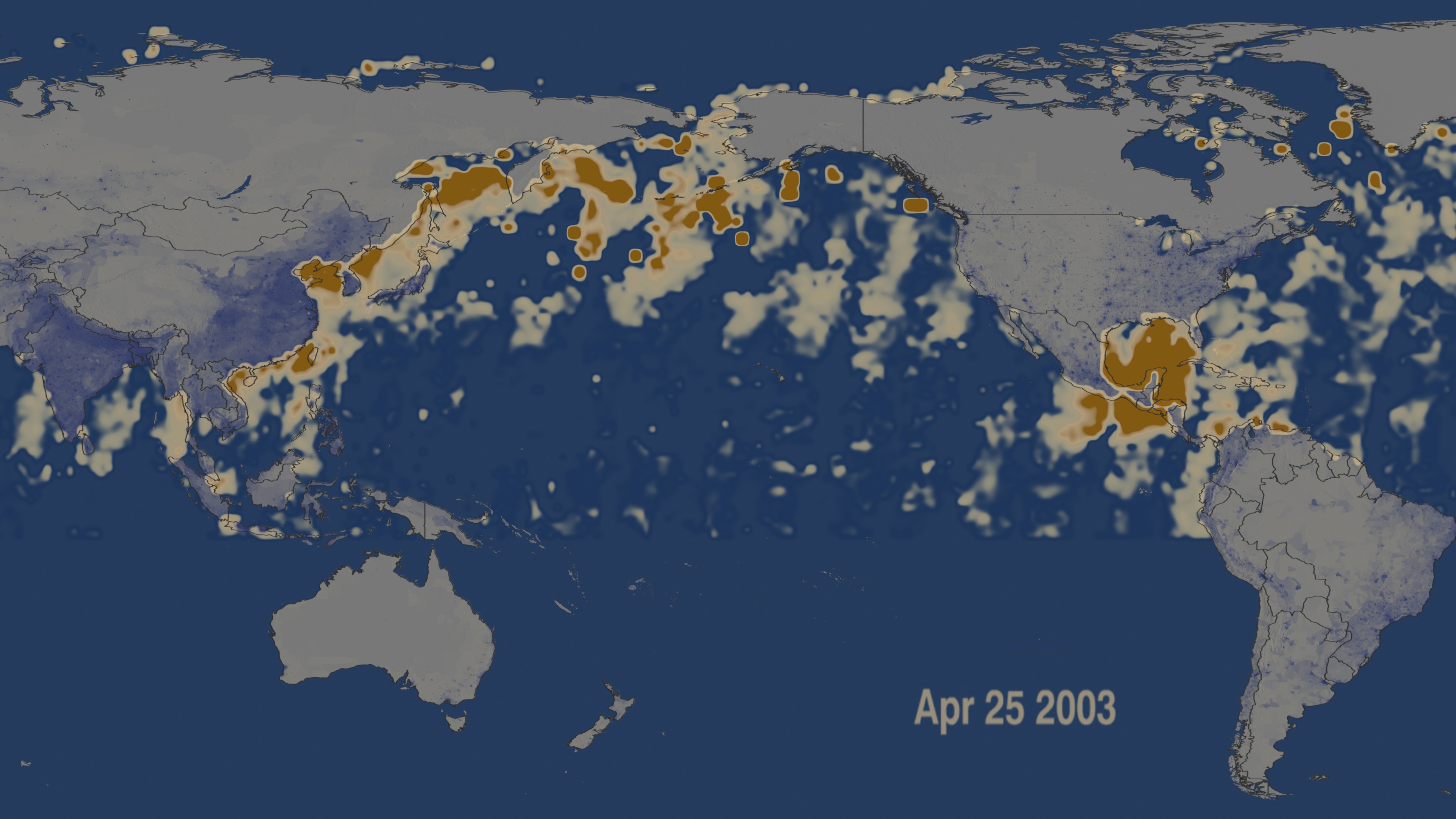 Download Options
April 25, 2003 With heavy concentrations of aerosols represented by shades of brown, scientists can track the origins and distribution of the particles as they travel in the atmosphere. 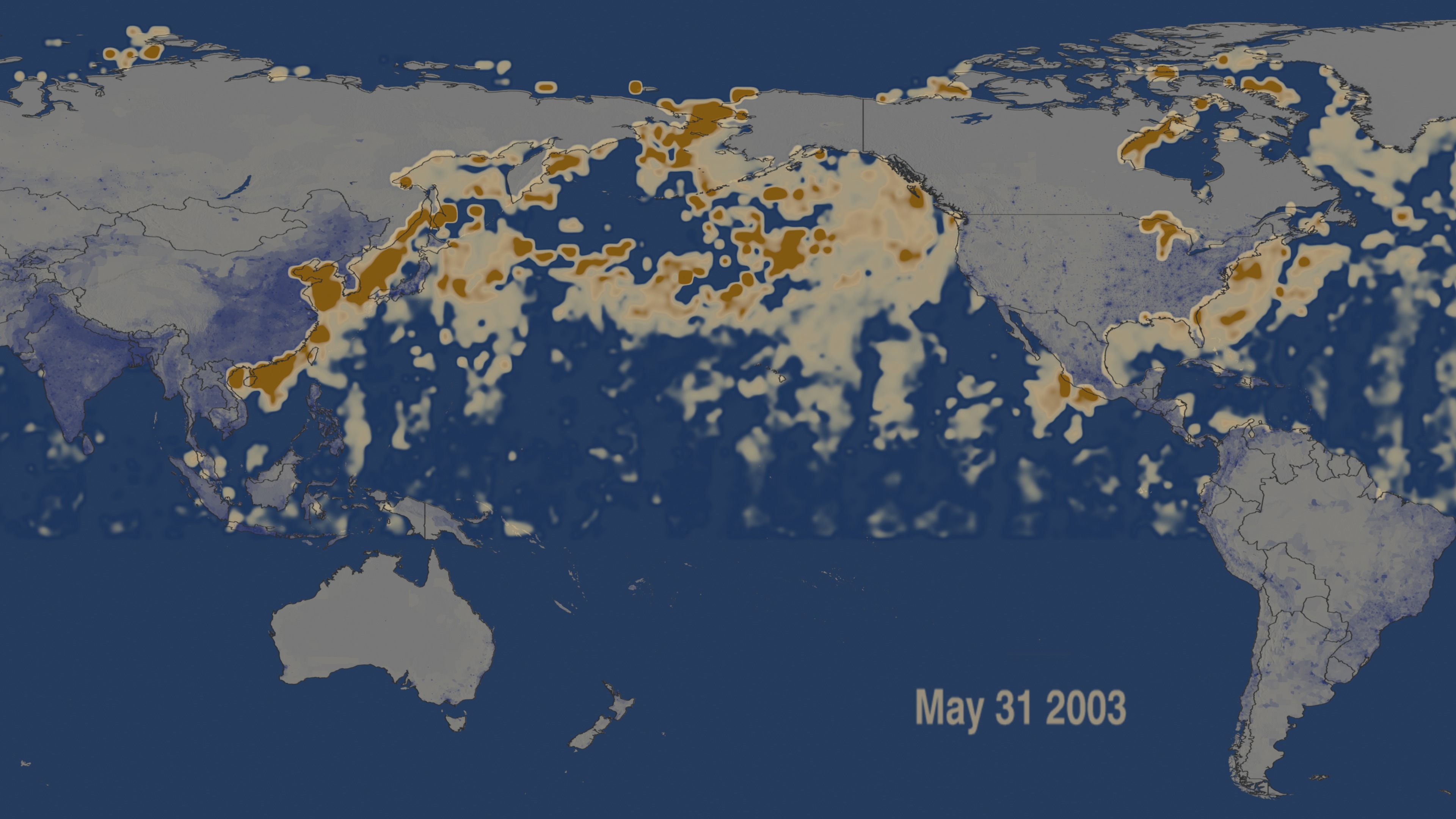 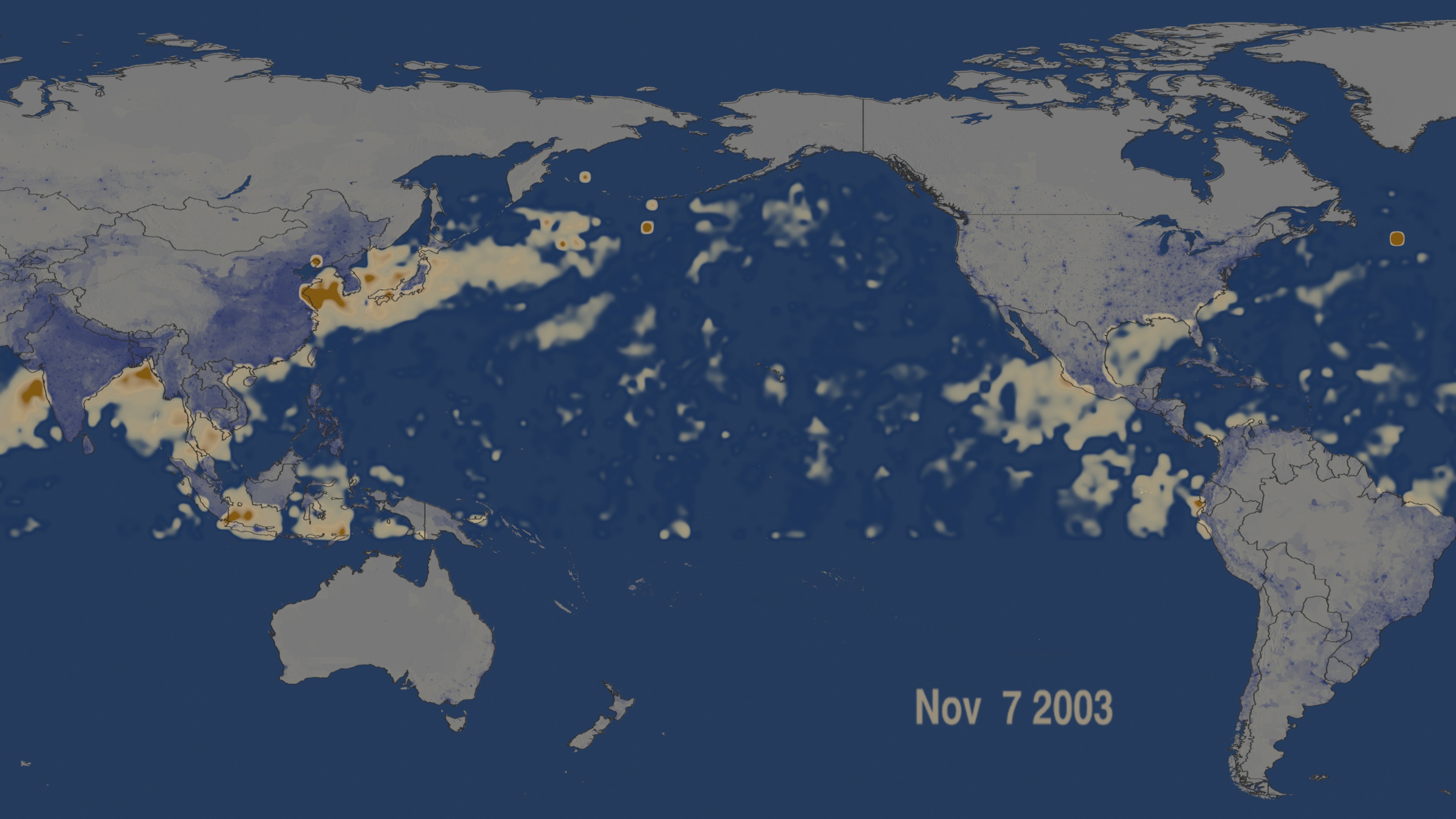 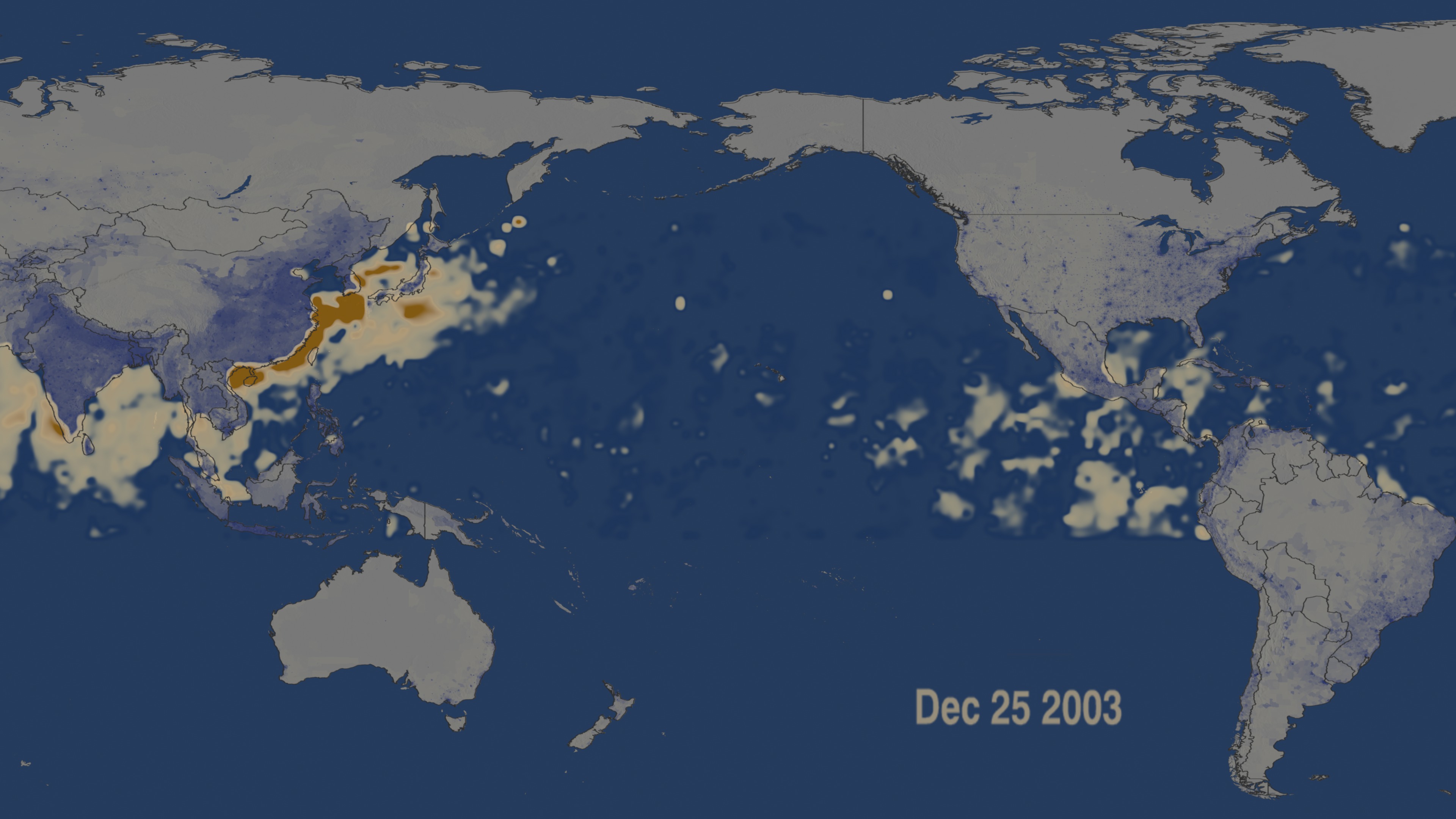 Download Options
Dec 25, 2003 In the last two decades, China has more than doubled its pollution production. This boom may be contributing to substantial changes in climate and weather in places far from the origin of the particulates.

2003/1 - 365
view all stories where this data set is used
Note: While we identify the data sets used in these visualizations, we do not store any further details nor the data sets themselves on our site.

This item is part of this series:
Aerosols and Warming