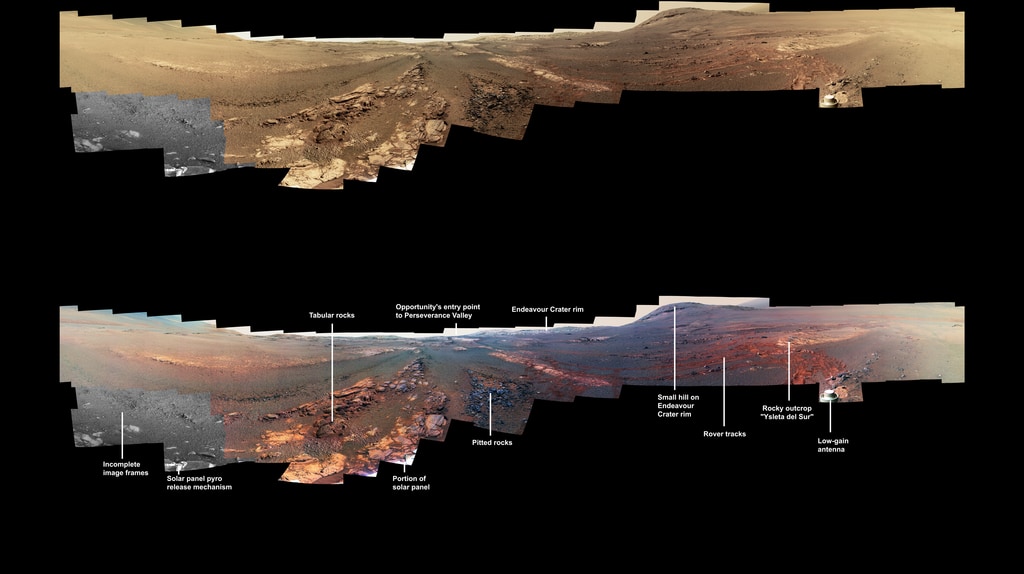 Incomplete image frames appear black and white. Color images taken with the rover's Pancam are taken one color at a time requiring three images of the same subject to create full color. Opportunity did not have the time to photograph those locations using the green and blue filters before a severe Mars-wide dust storm swept in on June 2018.

The tabular rock outcrop was the last surface feature Opportunity analyzed on June 3, 2018, (Sol 5,014) during its mission of exploration. The rover team was wrapping up investigations of these rocks when the dust storm hit.

A portion of Opportunity's solar array can be seen here. The rover's solar arrays consist of high-efficiency triple-junction solar cells. The extended "wings" of the deployed solar arrays are often visible in images, especially ones that image the ground near the rover.

Opportunity's entry point to Perseverance Valley. The rover first arrived at the valley rim on May 20, 2017, or Sol 4,736.

Three pitted rock targets ("Tomé," "Nazas" and "Allende") were investigated by Opportunity in late April and early May 2018. The pitted rocks had textures and compositions that were unique from anything the science team had seen during the mission.

The low-gain antenna, whose upper portion is visible here, would send and receive information in every direction, meaning it was "omni-directional." The antenna was designed to transmit and receive radio waves at a low rate to the Deep Space Network antennas on Earth.

Please give credit for this item to:
NASA/JPL-Caltech/Cornell/ASU