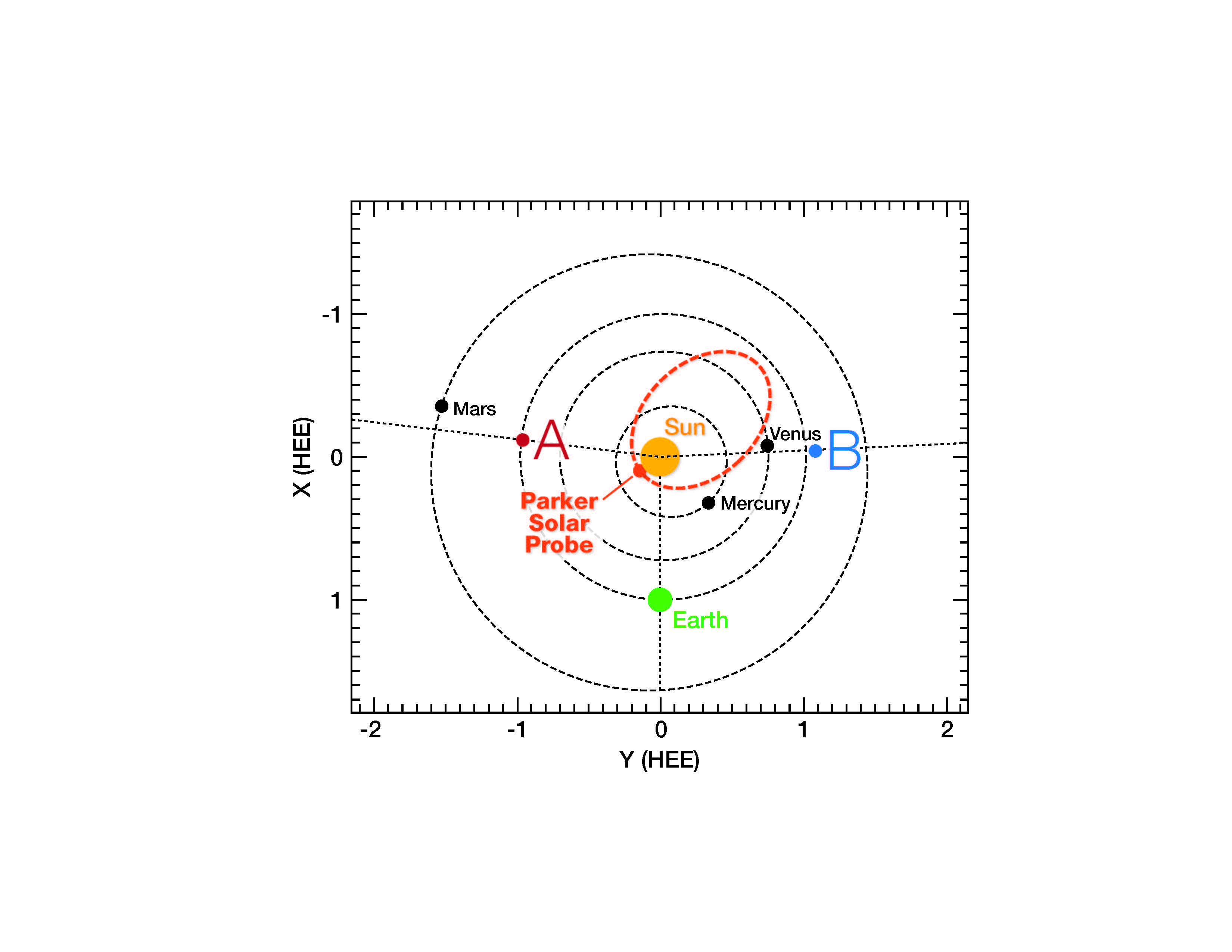 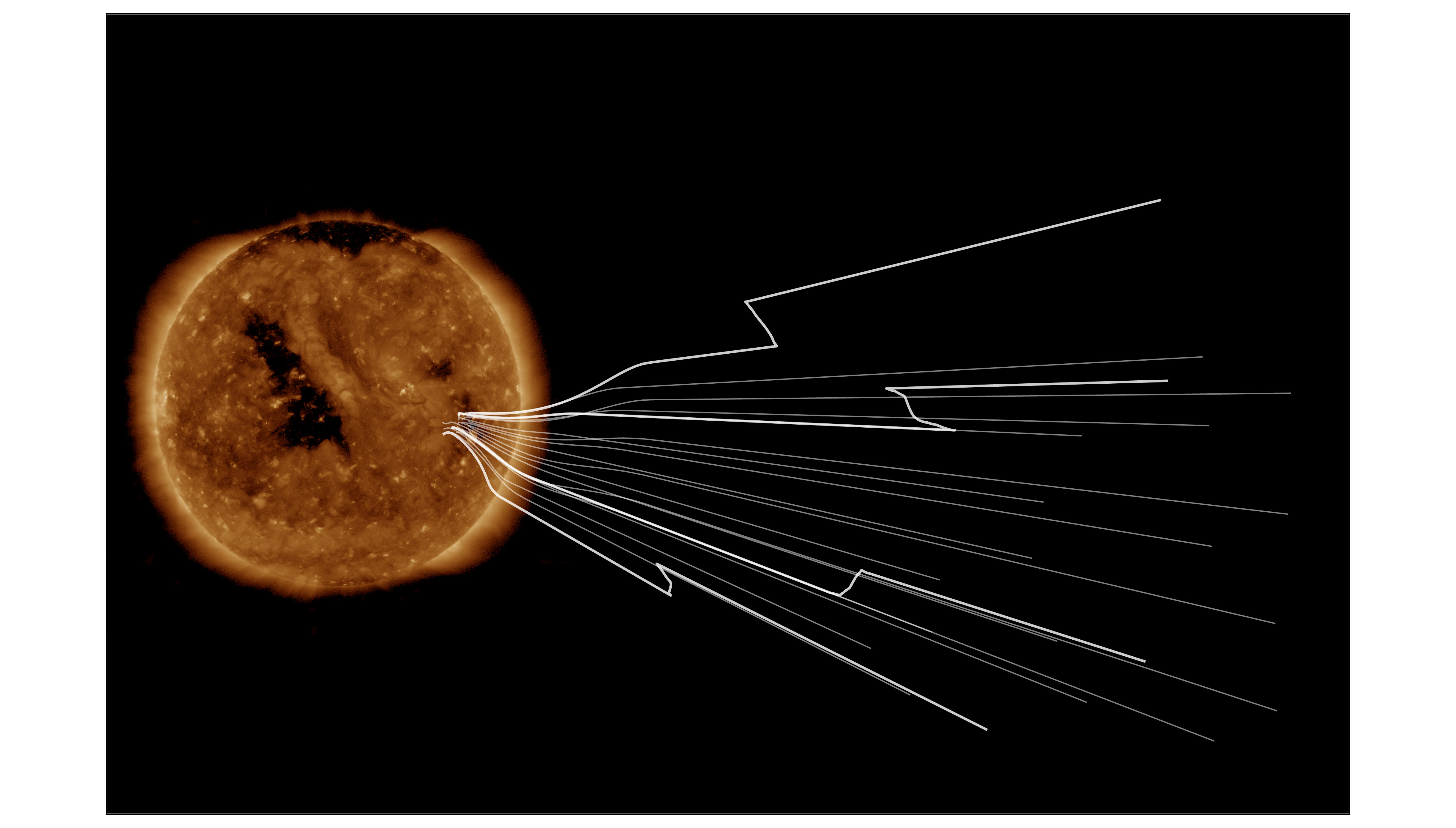 Download Options
The Sun, in UV light, during Parker Solar Probe’s first closest approach in its first orbit. White magnetic field lines are shown originating in a small coronal hole; kinks, based on real Parker measurements, show the switchbacks observed during the encounter.

Download Options
One of the fastest CMEs in years was captured by the STEREO COR1 telescopes on August 1, 2010. This movie, combining COR1-Ahead images with the simultaneous Helium II 304 Angstrom images from the STEREO EUVI telescope, shows the rapid explosion of material outward, followed by a slower eruption of a polar crown prominence from another part of the Sun. This CME is seen to be heading towards Earth at speeds well over 1000 kilometers per second.

Download Options
Running Difference movie from NASA's SECCHI COR 2 imager on STEREO A. This shows a coronal mass ejection lifting off on the left side of the video that Parker Solar Probe flew threw in November 11-12 2018.

Download Options
This clip shows the particle flow around the Earth as the CME strikes. Full movie at http://svs.gsfc.nasa.gov/3902 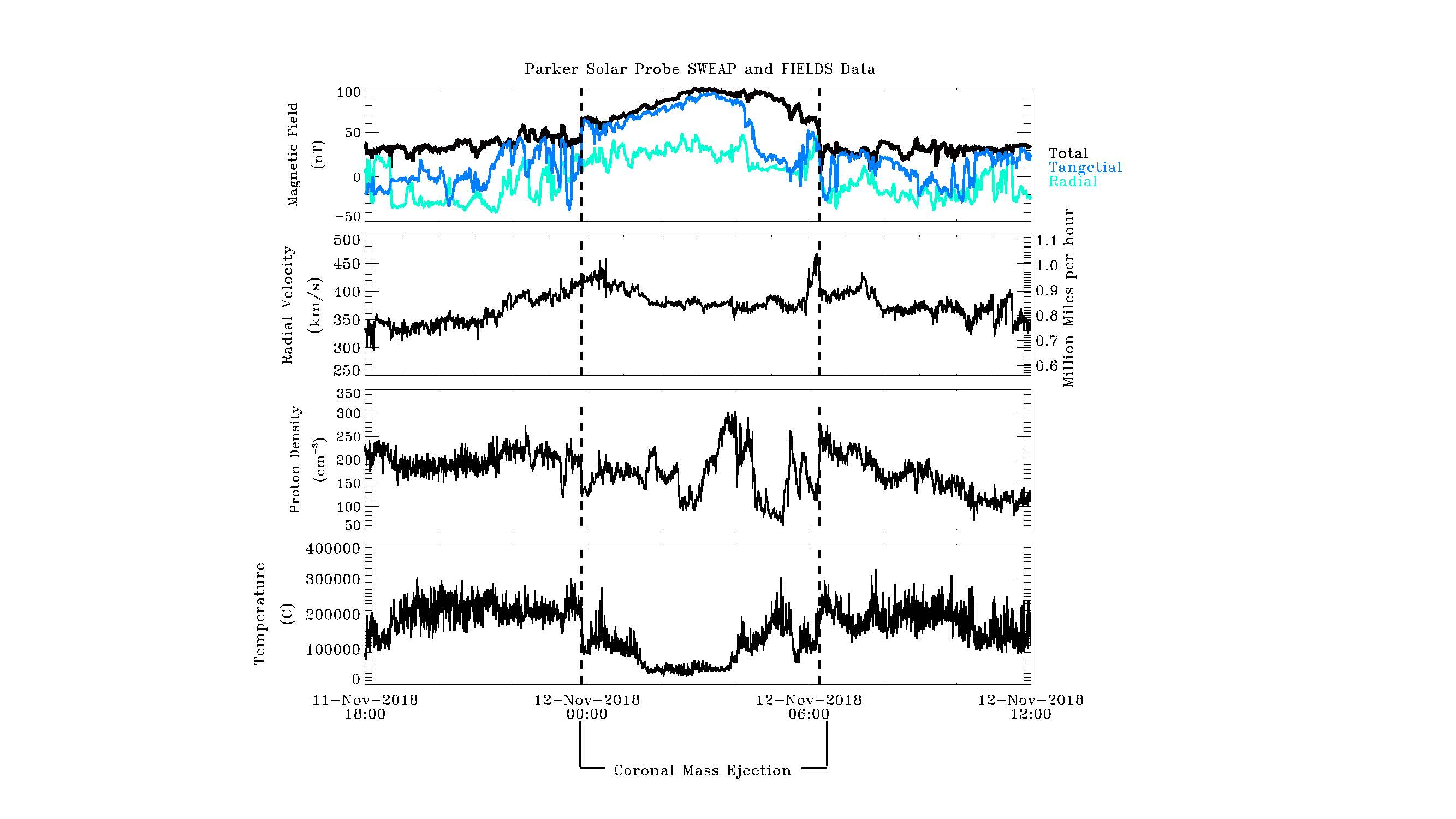 Credit: NASA Parker Solar Probe Mission, the SWEAP team led by J. Kasper, and the FIELDS team led by S. Bale for use of data.

Download Options
Here's a view of the Sun, from the point of view of a fleet of Sun-observing spacecraft - SOHO, TRACE, and RHESSI. The time scales of the data samples in this visualization range from 6 hours to as short as 12 seconds and the display rate varies throughout the movie. The region and event of interest is the solar flare over solar active region AR9906 on April 21, 2002. In this visualization, black corresponds to no (current) instrument coverage.

Download Options
Combined visualization of 3D magnetic field lines, and proton flux for energies above 50 MeV (the GOES 2nd channel) fopr the July 14, 2000 "Bastille Day" flare/CME.. The > 50 MeV flux is shown as color contours. The figure in the leftmost column display the low coronal portion (out to about 4RS) of the simulation, the middle frames display the corona to about 17RS, and the rightmost frame show the domain to 1 AU (the green sphere on the righthand edge of these images shows the Earth’s position.

Download Options
Enlil model of the 2019 April 20 CME propagating out to PSP. Left panels show modeled densities and right panels show the difference between the modeled density with the CME and the ambient density in the background solar wind. An animation is available. The video starts on 2019-04-01T02:01 and ends at 2019-05-01T00:02. The real-time video duration is 29 s.

Download Options
Composite of the PSP/WISPR Inner and Outer cameras during the first solar encounter (Nov 2018). The location and relative size of the Sun is shown to scale, remaining just outside of the field of view and allowing WISPR to observe solar outflow and coronal mass ejections. Many stars, and the Milky Way, can be see crossing the images. Credit: Brendan Gallagher/Karl Battams/NRL 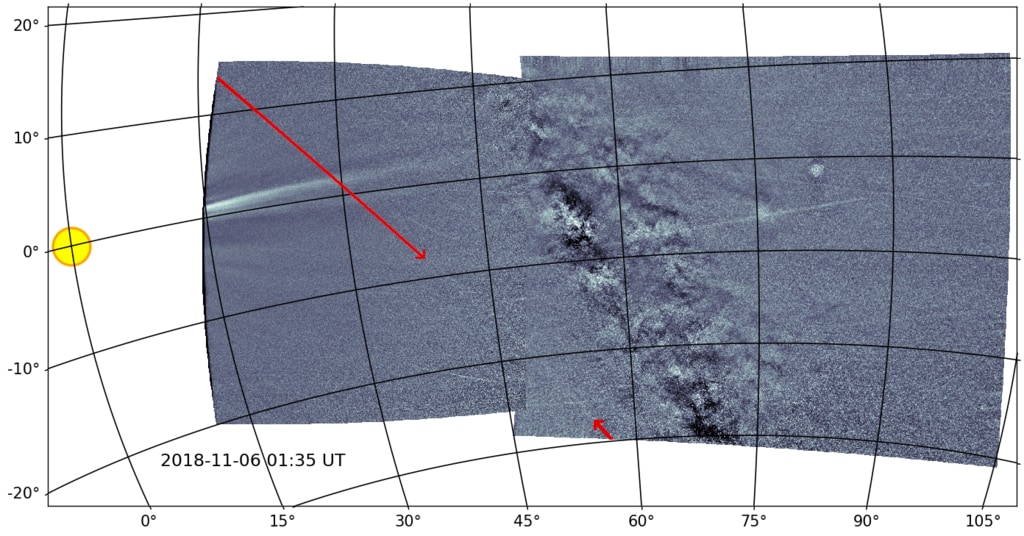 Download Options
This image, taken from [the movie above] highlights the location of the very faint dust trail we observe following Phaethon’s orbit. Credit: Brendan Gallagher/Karl Battams/NRL
Download Options
The same image sequence as [above] but with additional processing to reduce the brightness of stars and enhance fainter features. Here we are able to see more clearly the very faint dust trail – the Geminds – following the orbit of asteroid (3200) Phaethon. Credit: Brendan Gallagher/Karl Battams/NRL