Released on January 30, 2017
Download Options
On three occasions, NASA's Fermi Gamma-ray Space Telescope has detected gamma rays from solar storms on the far side of the sun, emission the Earth-orbiting satellite shouldn't be able to detect. Particles accelerated by these eruptions somehow reach around to produce a gamma-ray glow on the side of the sun facing Earth and Fermi. Watch to learn more.

This illustration shows large magnetic structures extending high above the sun from the active region hosting the Sept. 1, 2014, solar blast. Left: Scientists think particles accelerated at the leading edge of the event's coronal mass ejection followed magnetic lines high above the sun. Right: Some of the particles followed similar magnetic structures rooted in the Earth-facing side of the sun. They rained down on the sun and interacted with the solar surface, producing gamma rays (magenta). The solar images shown here come from (left) STEREO B and (right) NASA's Solar Dynamics Observatory.

Download Options
These solar flares were imaged in extreme ultraviolet light by NASA's STEREO satellites, which at the time were viewing the side of the sun facing away from Earth. All three events launched fast coronal mass ejections (CMEs). Although NASA's Fermi Gamma-ray Space Telescope couldn't see the eruptions directly, it detected high-energy gamma rays from all of them. Scientists think particles accelerated by the CMEs rained onto the Earth-facing side of the sun and produced the gamma rays. The central image was returned by the STEREO A spacecraft, all others are from STEREO B. 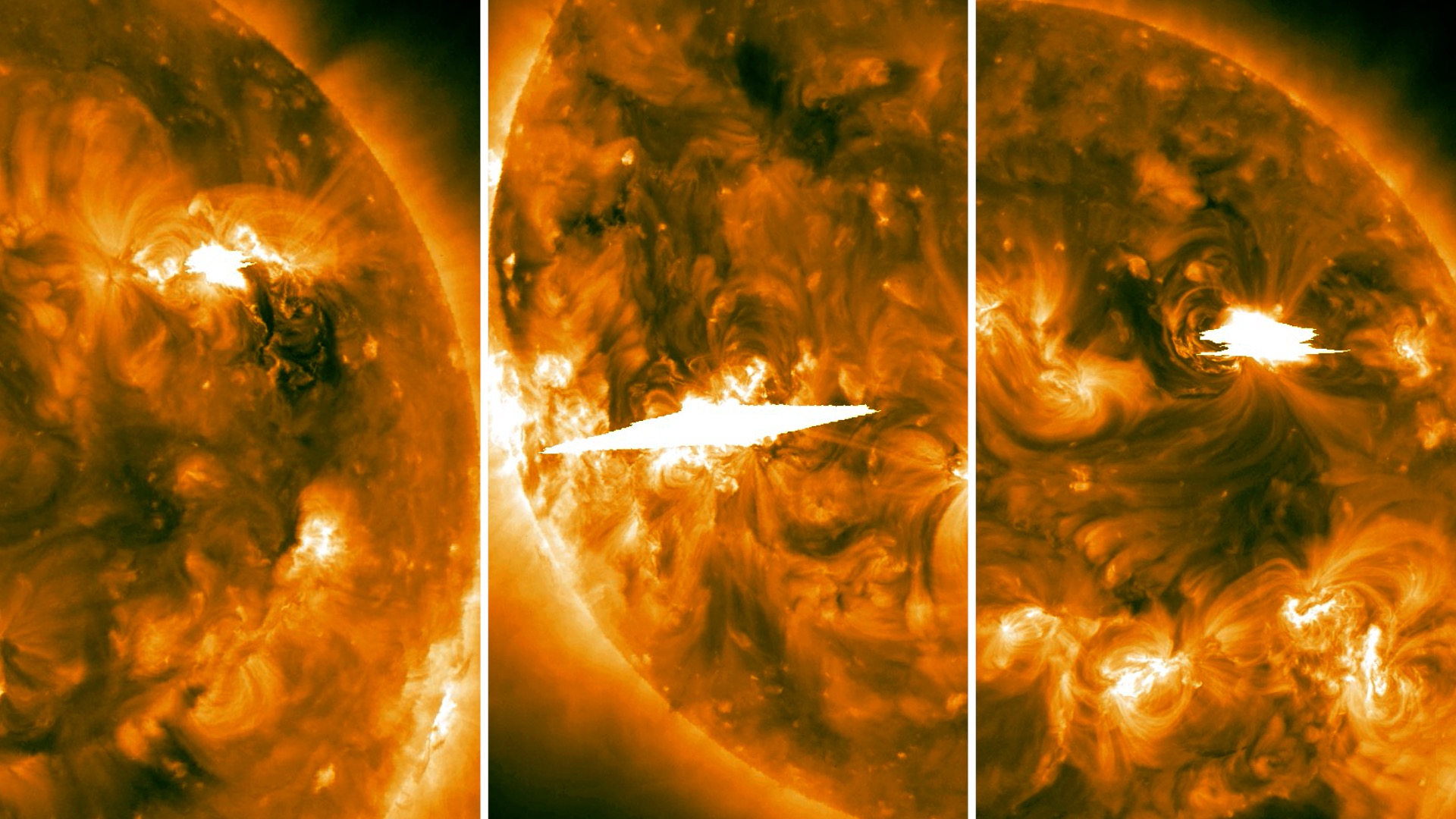 Download Options
Left: A STEREO B image of the far side of the sun during the Sept. 1, 2014, solar eruption. Right: The Earth-facing side of the sun at the same time as seen by NASA's Solar Dynamics Observatory. The view includes the area from which NASA's Fermi detected high-energy gamma rays. Includes animated gif.

Download Options
Combined images from NASA's Solar Dynamics Observatory (center) and the NASA/ESA Solar and Heliospheric Observatory (red and blue) show an impressive coronal mass ejection (CME) departing the far side of the sun on Sept. 1, 2014. This massive cloud raced away at about 5 million mph and likely accelerated particles that later produced gamma rays Fermi detected.

Download Options
This movie of the Sept. 1, 2014, coronal mass ejection (CME) shows the billowing cloud of plasma as it expands from 865,000 to 2.6 million miles above the sun's visible surface. The images were taken by a coronagraph aboard NASA/ESA's Solar and Heliospheric Observatory. A coronagraph is a telescope where a central disk blocks the sun's disk in order to capture faint light from the outer atmosphere, called the corona. The white circle shows the size and position of the sun. 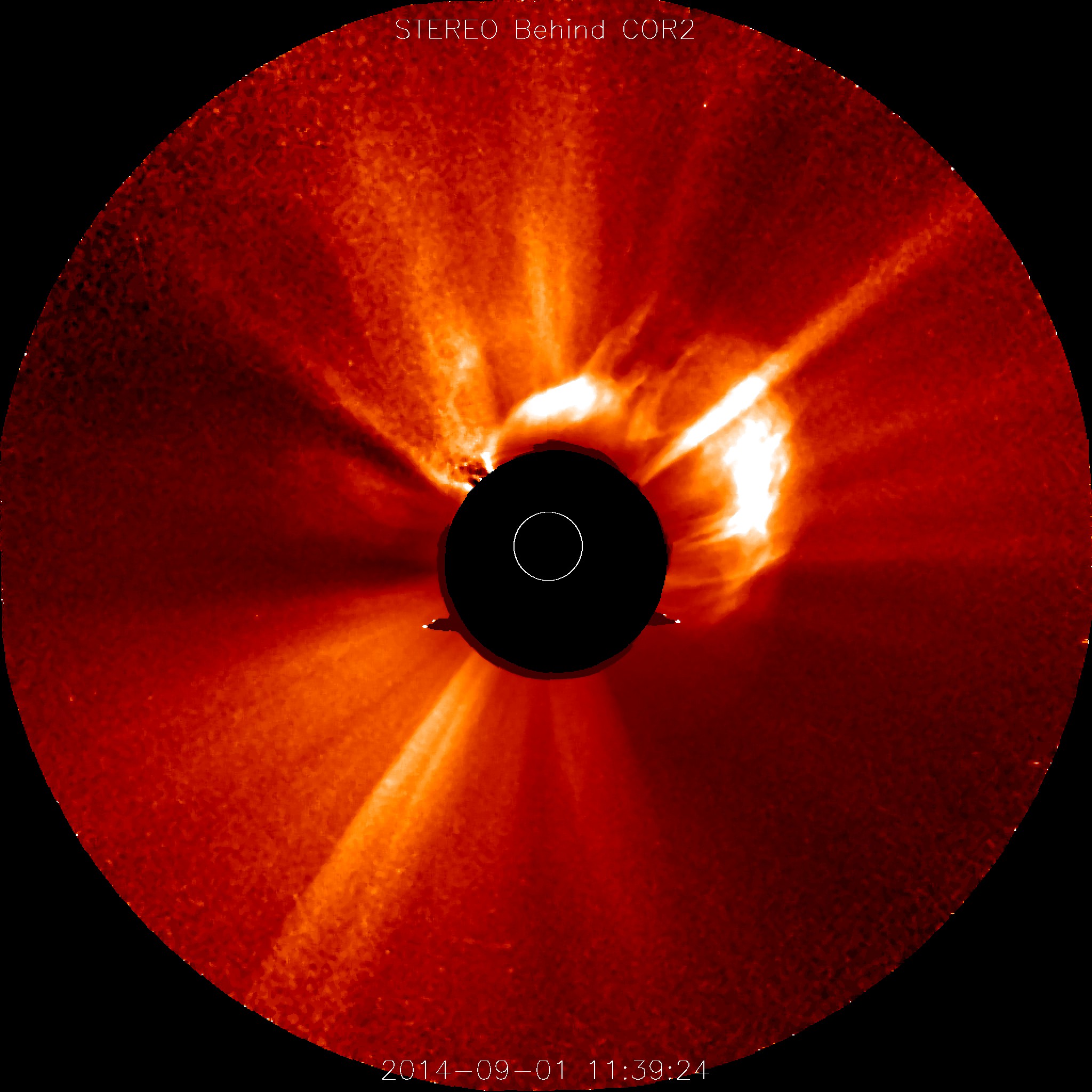 Download Options
STEREO B had a direct view of the Sept. 1, 2014, solar blast. In this image from one of the spacecaft's coronagraphs, a billion-ton coronal mass ejection is racing into space. A corongarph is a telescope with a central disk that blocks the sun's direct light in order to capture the glow of its outer atmosphere, the corona. The white circle shows the size and position of the sun.