Released on September 30, 2013
Download Options
NASA Planetary Scientist Conor Nixon explains his discovery of propylene on Titan, Saturn's largest moon. Scientists have known about the presence of atmospheric hydrocarbons on Titan since Voyager 1 flew by in 1980, but one molecule, propylene, was curiously missing. Now, thanks to new data from NASA's Cassini spacecraft, propylene has been detected for the first time on Titan. 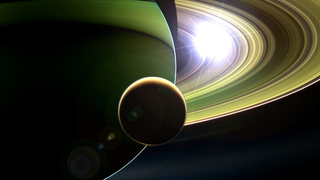