Released on June 14, 2013
Download
This animation of supercomputer data takes you to the inner zone of the accretion disk of a stellar-mass black hole. Gas heated to 20 million degrees F as it spirals toward the black hole glows in low-energy, or soft, X-rays. Just before the gas plunges to the center, its orbital motion is approaching the speed of light. X-rays up to hundreds of times more powerful ("harder") than those in the disk arise from the corona, a region of tenuous and much hotter gas around the disk. Coronal temperatures reach billions of degrees. The event horizon is the boundary where all trajectories, including those of light, must go inward. Nothing, not even light, can pass outward across the event horizon and escape the black hole.

Download
This animation of supercomputer data shows low-energy (soft) X-ray emission from the inner accretion disk of a stellar-mass black hole. Infalling gas is compressed and heated to millions of degrees as it swirls toward the inner edge of the disk, where the orbital speed approaches the speed of light. Magnetic fields threading through the gas are dramatically amplified. They affect the motion of the ionized gas, resulting in complex, turbulent motion. The left side of the disk appears brighter than the right because the energy of light emitted by gas approaching us (left) is increased by the Doppler shift, while the energy of light emitted in gas moving away from us (right) is decreased. We view the scene from a perspective 45 degrees above the accretion disk.

Download
This animation of supercomputer data shows high-energy (hard) X-rays radiated from the corona region above the accretion disk of a stellar-mass black hole. The corona is a tenuous gas above and below the disk with temperatures reaching billions of degrees. The contrast between the left and right sides of the image, caused by the Doppler shift, is much less pronounced than in the disk movie. This is because the random motions of particles in the corona are as fast as their orbital speed, which reduces the contrast. Particles in the corona scatter soft X-rays from the disk and give them an energy boost, resulting in hard X-ray emission. We view the corona from a perspective 45 degrees above the plane of the accretion disk.

Download
This animation of supercomputer data shows both low-energy X-rays (red) from the inner accretion disk and high-energy X-rays (blue) from the inner corona of a stellar-mass black hole. Particles in the corona scatter soft X-rays from the disk and give them an energy boost, resulting in hard X-ray emission. We view the scene from a perspective 45 degrees above the plane of the accretion disk. 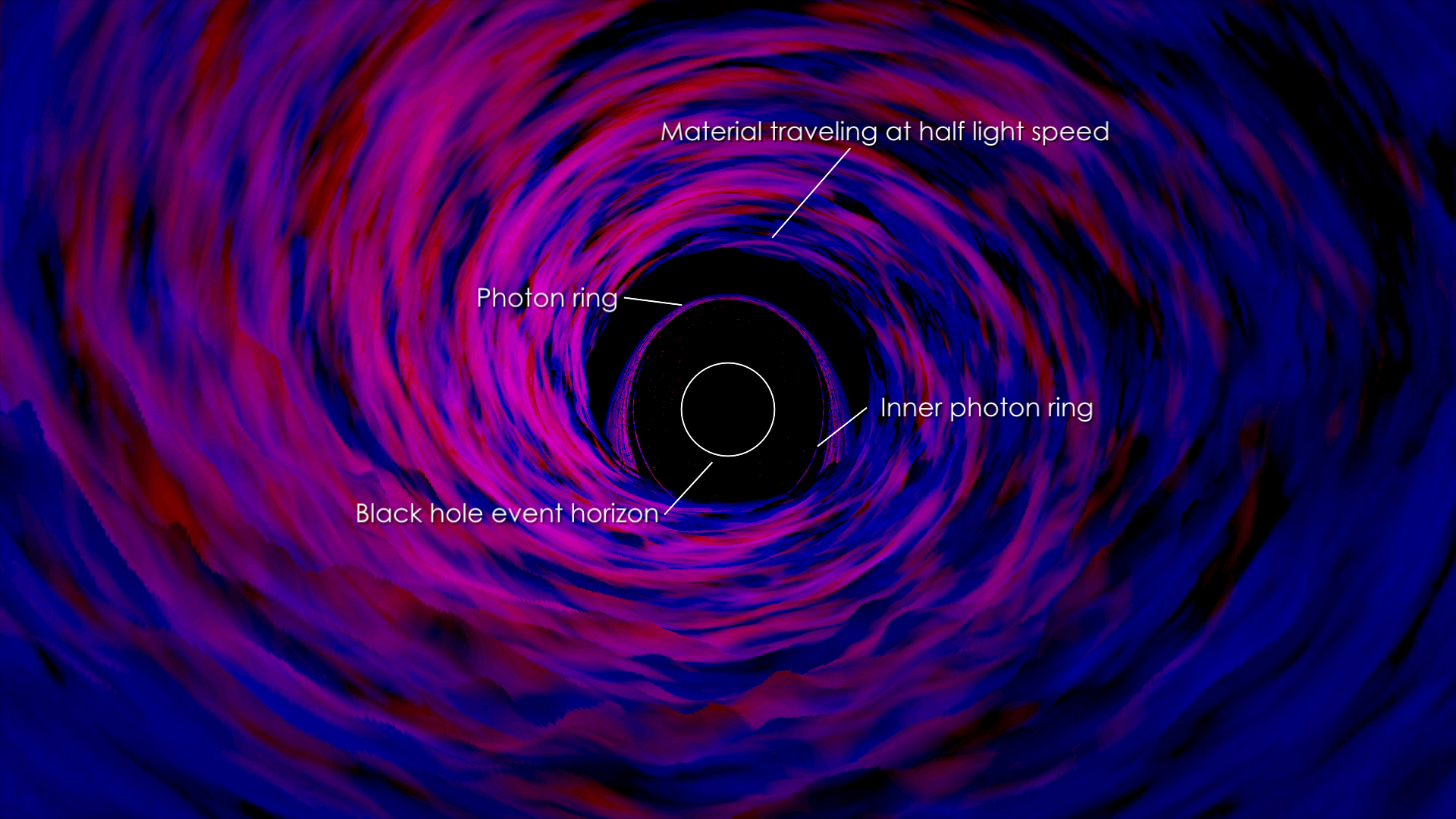 Download
This annotated image labels several features in the simulation, including the event horizon of the black hole. 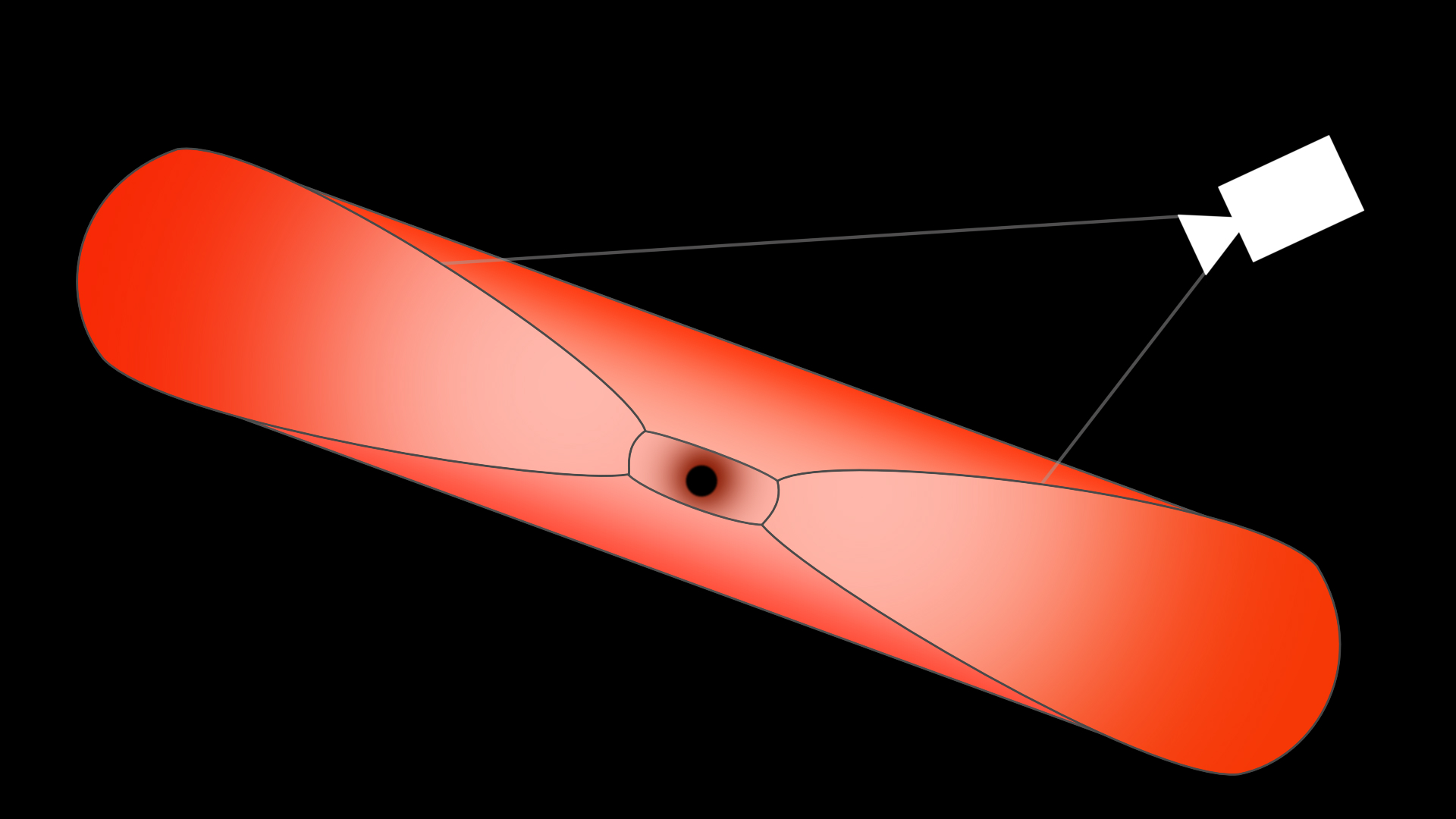 Download
This illustration shows the approximate relationships between the black hole, its accretion disk (red), and the viewpoint and field of view of the simulation. 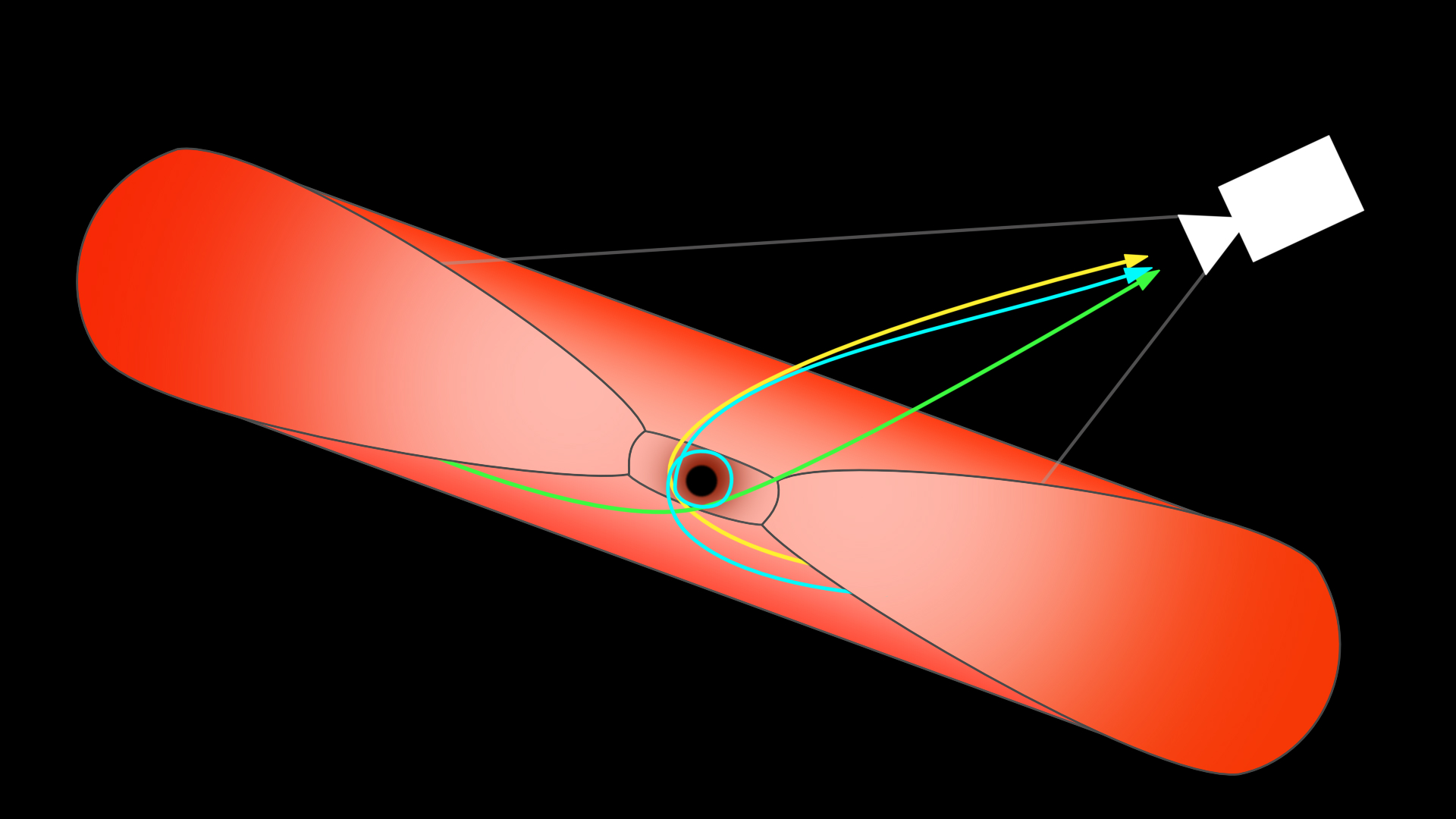 Download
This illustration shows the paths of soft X-rays (arrows) from the underside of the accretion disk that form rings seen near the black hole in the simulation. 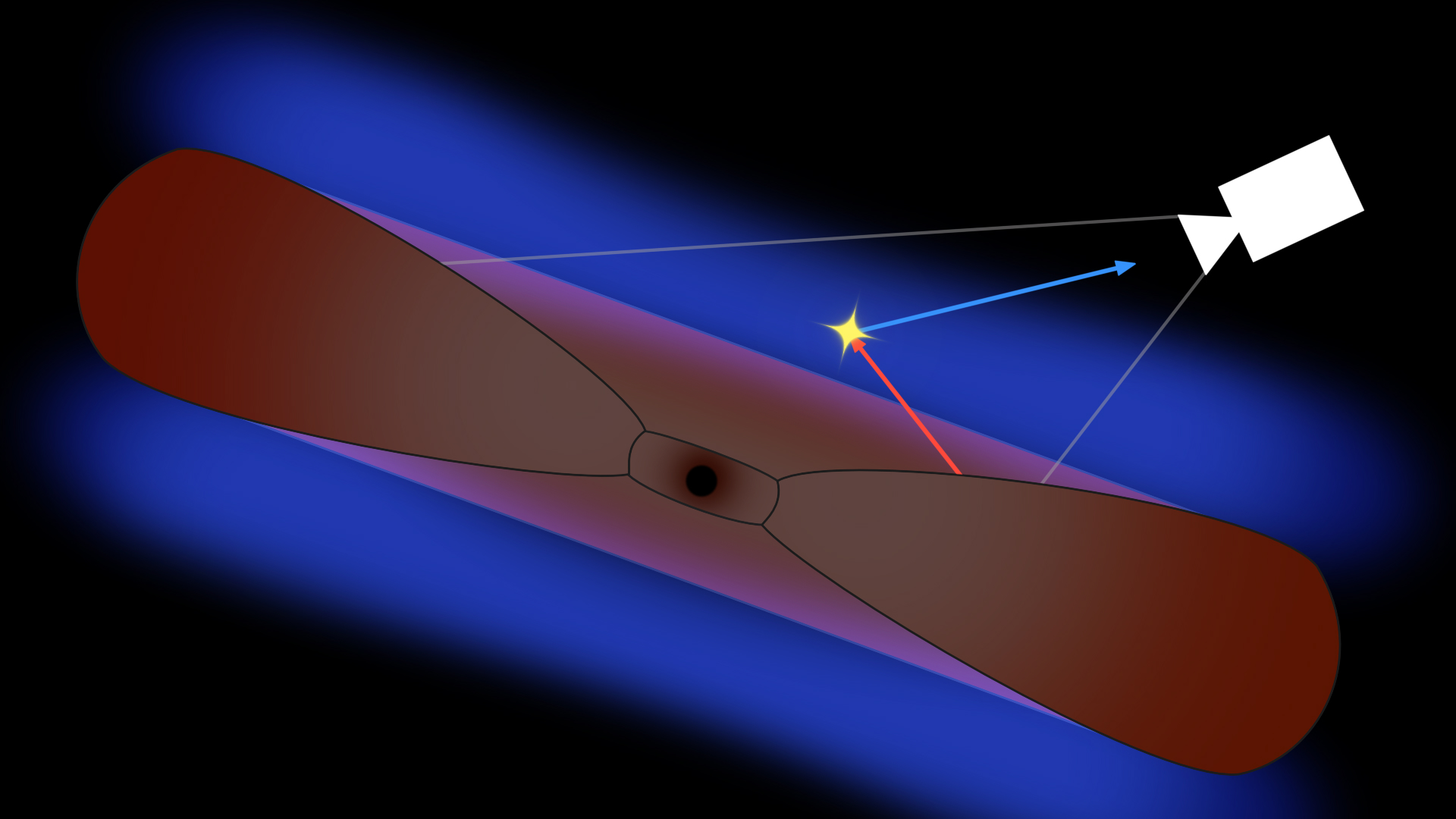 Download
This illustration shows the approximate relationships between the black hole, its accretion disk and the corona region (blue). The arrows show a soft X-ray (red) traveling into the corona and striking a particle moving near the speed of light. The collision scatters the light and boosts it to much higher energy, making it a hard X-ray. This process is known as inverse Compton scattering.
Download
This animation illustrates inverse Compton scattering. In the corona region above a black hole's accretion disk, electrons and other particles move at appreciable fractions of the speed of light. When a low-energy X-ray (red) from the disk travels through this region, it may collide with one of the fast-moving particles (in this case, an electron). The impact scatters the light while simultaneously boosting its energy into the hard X-ray (blue) regime. 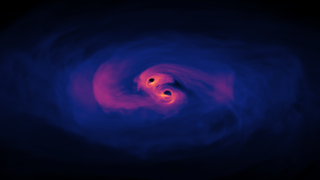 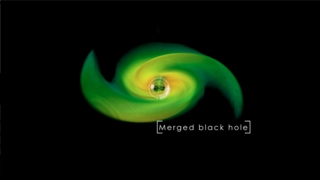 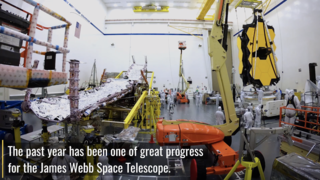