Visualizations by Eric Sokolowsky Released on February 13, 2004
Download Options
This animation shows the progression of the fires in and around Yellowstone National Park during the summer of 1988, overlayed on a false-color image from Landsat 7. Independent fires are shown in different colors, and the most recently burned areas are shown in a brighter color.

Download Options
This is the legend for the Yellowstone Fires animation, identifying the names of the fire regions. 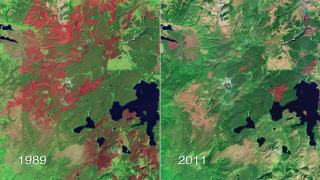 Data Compilation - USGS - 1988/06/30 - 1988/10/02
http://sagemap.wr.usgs.gov/ftp/wyoming/NPS/yell_fire88perim.htm
view all stories where this data set is used
Note: While we identify the data sets used in these visualizations, we do not store any further details nor the data sets themselves on our site.