Download
This is the legend used in the animation described above. 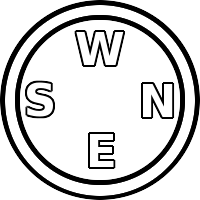 Download
This is the compass used to show that north is to the right.

Data Used:
LandTrendr
Note: While we identify the data sets used in these visualizations, we do not store any further details nor the data sets themselves on our site.

This item is part of this series:
Hyperwall