Released on February 20, 2014
Download Options
This view shows J1311 as we see it from Earth. The pulsar's gamma-ray emission (magenta) dominates from our perspective because our line of sight passes through dense clouds of ionized gas blown off of the companion star. Most of the time, these clouds are dense enough to either absorb or scatter the pulsar's radio signals (green), preventing their detection. The pulsar's rotation — in reality, 23,000 rpm — has been slowed for clarity.
Download Options
Slower version of the above animation.
Download Options
This view shows J1311 from above its orbital plane, a view not accessible from Earth. Gas blown off the companion star trails along its orbit and diffuses throughout the system but is densest along their orbital plane. From this vantage point, both the radio beam (green) and the gamma-ray emission (magenta) escape the system. The pulsar actually spins 390 times each second.
Download Options
Slower version of the above animation.
Download Options
The black widow pulsar J1311 and its small stellar companion, viewed within their orbital plane. Powerful radiation and the pulsar's "wind" – an outflow of high-energy particles — strongly heat the facing side of the star to temperatures twice as hot as the sun's surface. The pulsar is gradually evaporating its partner, which fills the system with ionized gas and prevents astronomers from detecting the pulsar's radio beam most of the time. The star's surface is also distorted by the gravitational pull of the more massive pulsar.
Download Options
Slower version of the above animation. 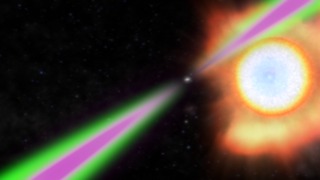 Please give credit for this item to:
NASA's Goddard Space Flight Center/Cruz deWilde