FROZEN: A Spherical Movie About the Cryosphere

Released on March 12, 2009
Download
Designed exclusively for playback on spherical projections surfaces, FROZEN introduces mainstream audiences to the cryosphere—places on Earth where the temperatures don't rise above water's freezing point. The following trailer showcases some of the visual themes contained in the movie and points to the film's main website.

This film has been prepared exclusively for playback on spherical projections systems. It will not appear in its proper format on a traditional computer or television screen. If you are interested in dowloading the complete final movie file for spherical playback, please visit : 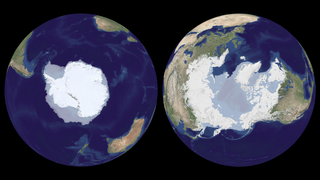 Written, Produced and Directed by
Michael Starobin and Horace Mitchell

Based on a presentation by
Dr. Robert Bindschadler/GSFC

Audio Engineering and Assistant to the Composer
Eric Arvai

Science On a Sphere was Developed by NOAA

Data Used:
Groundwater Resources of the World
North American Atlas
GLIMS Glacier Database
Terra and Aqua/MODIS/Blue Marble Land Cover
Circum-Arctic Map of Permafrost and Ground-Ice Conditions
Landsat-7/ETM+/Landsat Image Mosaic of Antarctica
Glacier Inventory of West Greenland
Antarctic Digital Database, The
DMSP/OLS/Earth at Night
World Glacier Inventory
Note: While we identify the data sets used in these visualizations, we do not store any further details nor the data sets themselves on our site.

This item is part of this series:
Goddard Magic Planet Media