Visualizations by Alex Kekesi Released on April 10, 2017
Download Options
This visualization starts over the United States as the viewer watches a weather event form over the east coast. We then freeze on April 1, 2017 as GPM flies overhead collecting data over this weather system. Zooming down to the Northeast, GPM's DPR (3D volumetric precipitation data) is slowly cut away to reveal the inner precipitation structure of the snow storm. Looking closely, one can see a thin band of liquid precipitation that formed in the northern section of the storm eventually tapering into frozen precipitation in the far north. The visualization wraps with the camera pulling back to a bird's eye view of the snow storm. 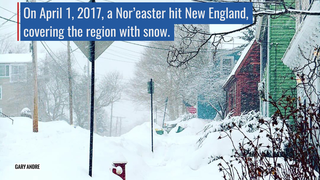 Observed Data - JAXA - 4/1/2017 5:15:48 - 6:48:22Z
Credit:
Data provided by the joint NASA/JAXA GPM mission.
view all stories where this data set is used
Note: While we identify the data sets used in these visualizations, we do not store any further details nor the data sets themselves on our site.