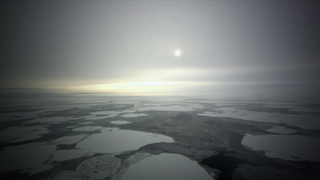 Sea Ice: Past, Present and Future

Data Used:
Sea Ice Concentrations from Nimbus-7 SMMR and DMSP SSM/I-SSMIS Passive Microwave Data 01/1979 through 12/2014
Note: While we identify the data sets used in these visualizations, we do not store any further details nor the data sets themselves on our site.

Sea Ice: Past, Present and Future