Visualizations by Ernie Wright Released on March 19, 2013
Download Options
LRO flies over the north pole of the Moon, where it has a very good view of the GRAIL impact. The second part is the view from LRO through LAMP's slit, showing the impact and the resulting plume. The orbits, impact locations, terrain, LAMP field of view, and starfield are accurately rendered.
Download Options
This is the raw footage of the previous entry. It lacks the clock, slit, and starfield. Includes an alpha channel.
Download Options
The starfield frames. LAMP was looking in the direction of the constellation Orion at the time of the GRAIL impact. 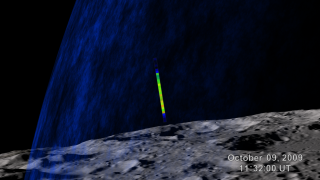