Visualizations by Tom Bridgman Released on May 29, 2012
Download Options
This movie illustrates how the relative motions of the Earth and Venus in their orbits will produce the transit.
Download Options
Extremely high-resolution frames suitable for Hyperwall projection. This version also has the planet trails rendered thinner, a high-resolution background star field, and the model of the Earth fades in sooner. 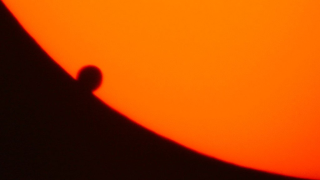 Ephemeris - NASA/JPL
Planetary ephemerides
http://ssd.jpl.nasa.gov/?planet_pos
view all stories where this data set is used
Note: While we identify the data sets used in these visualizations, we do not store any further details nor the data sets themselves on our site.

This item is part of this series:
Venus Transit