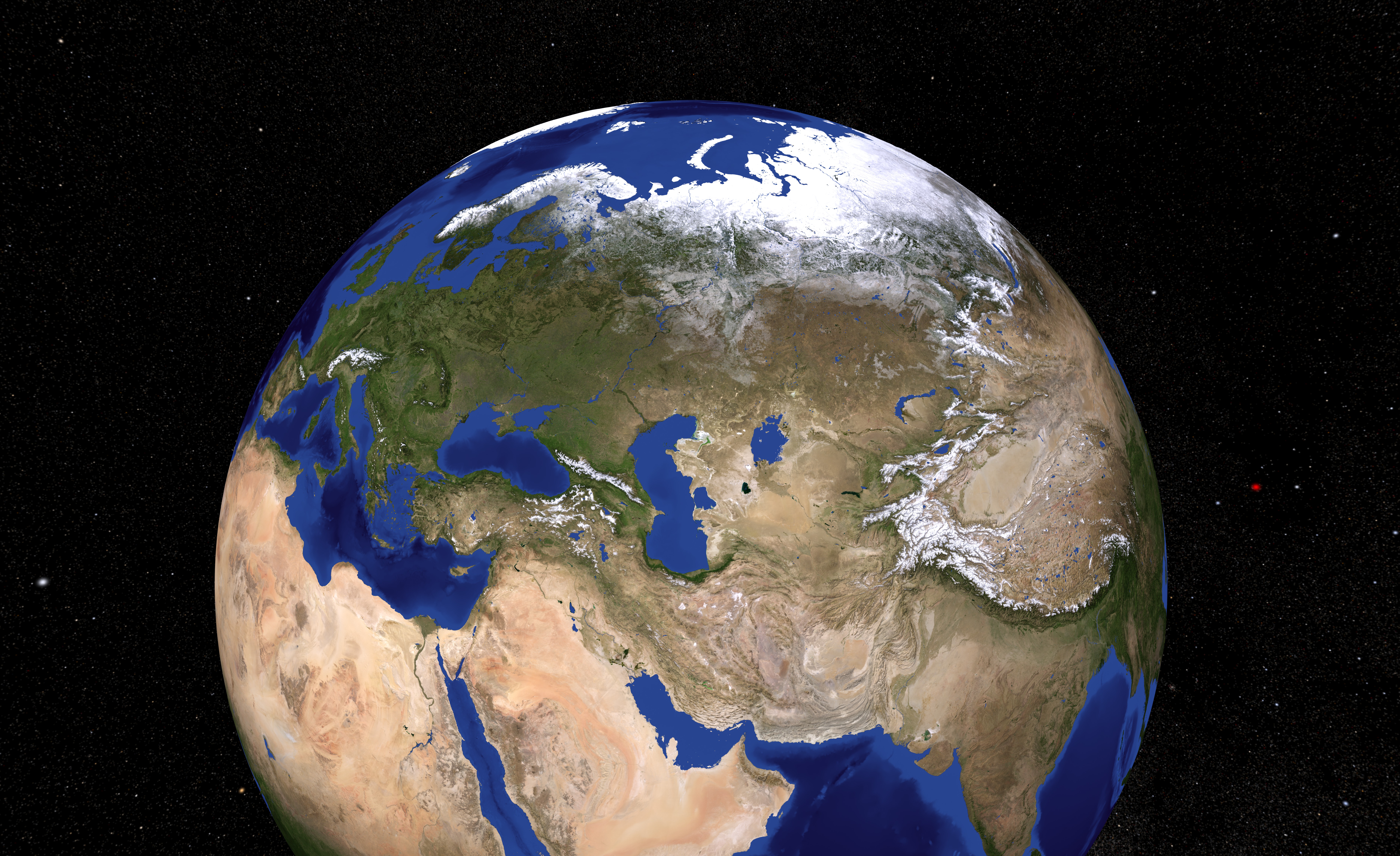 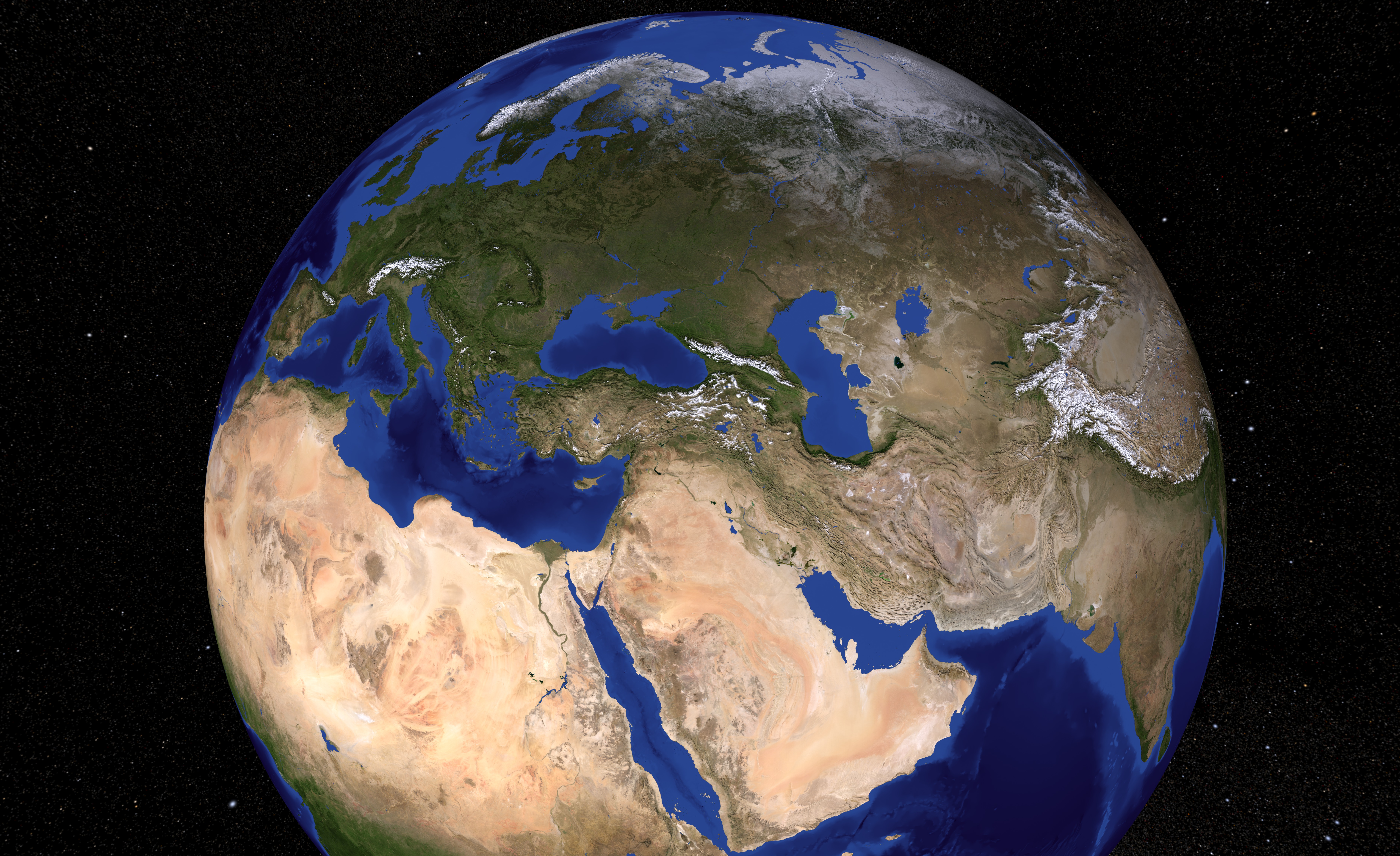 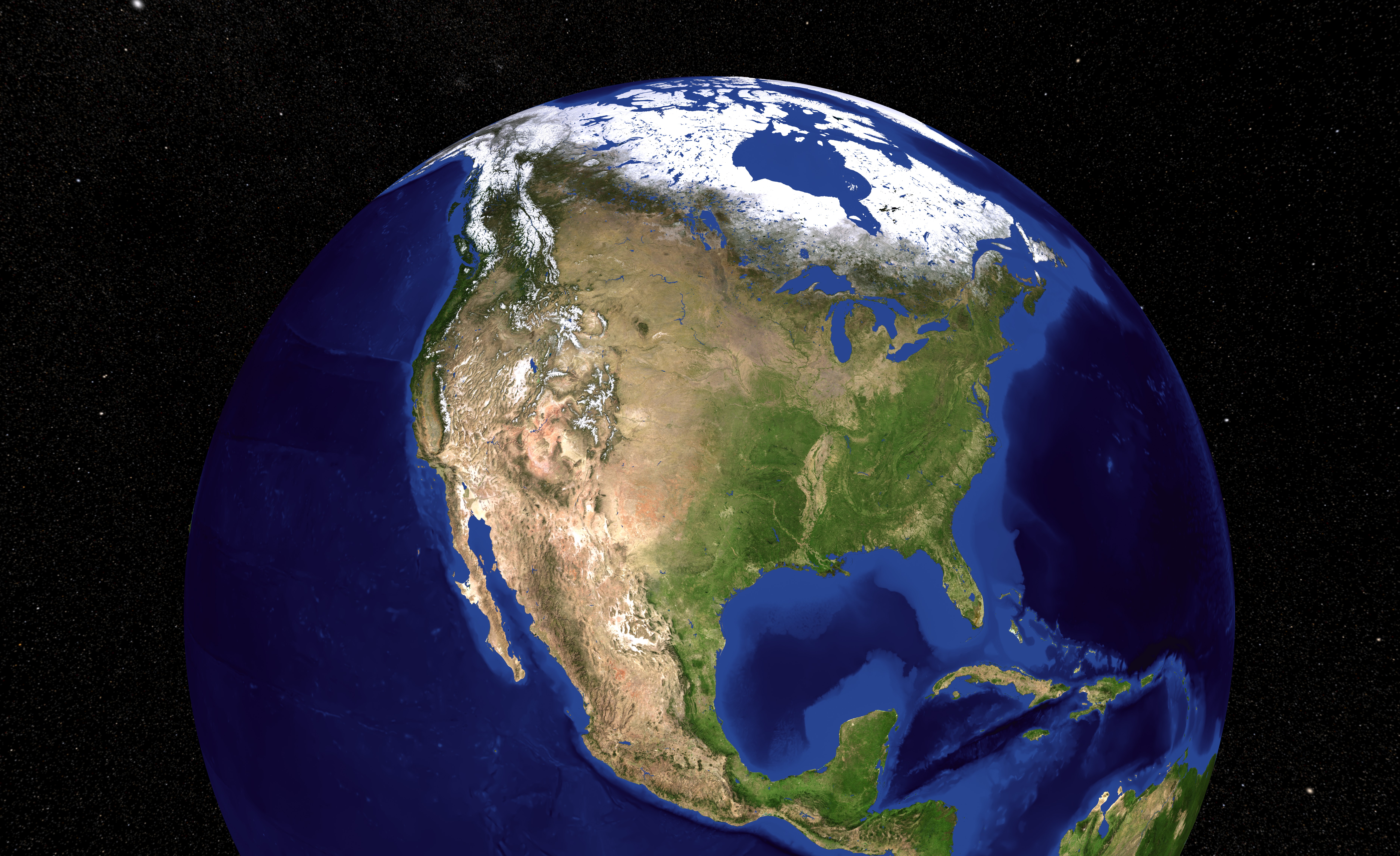 Download Options
The outline of North America is exceedingly irregular; some extensive coastal reaches are relatively smooth, but by and large the coastline is broken and embayed, with many prominent offshore islands. The continent has three enormous coastal indentations: Hudson Bay in the northeast, the Gulf of Mexico in the southeast, and the Gulf of Alaska in the northwest. 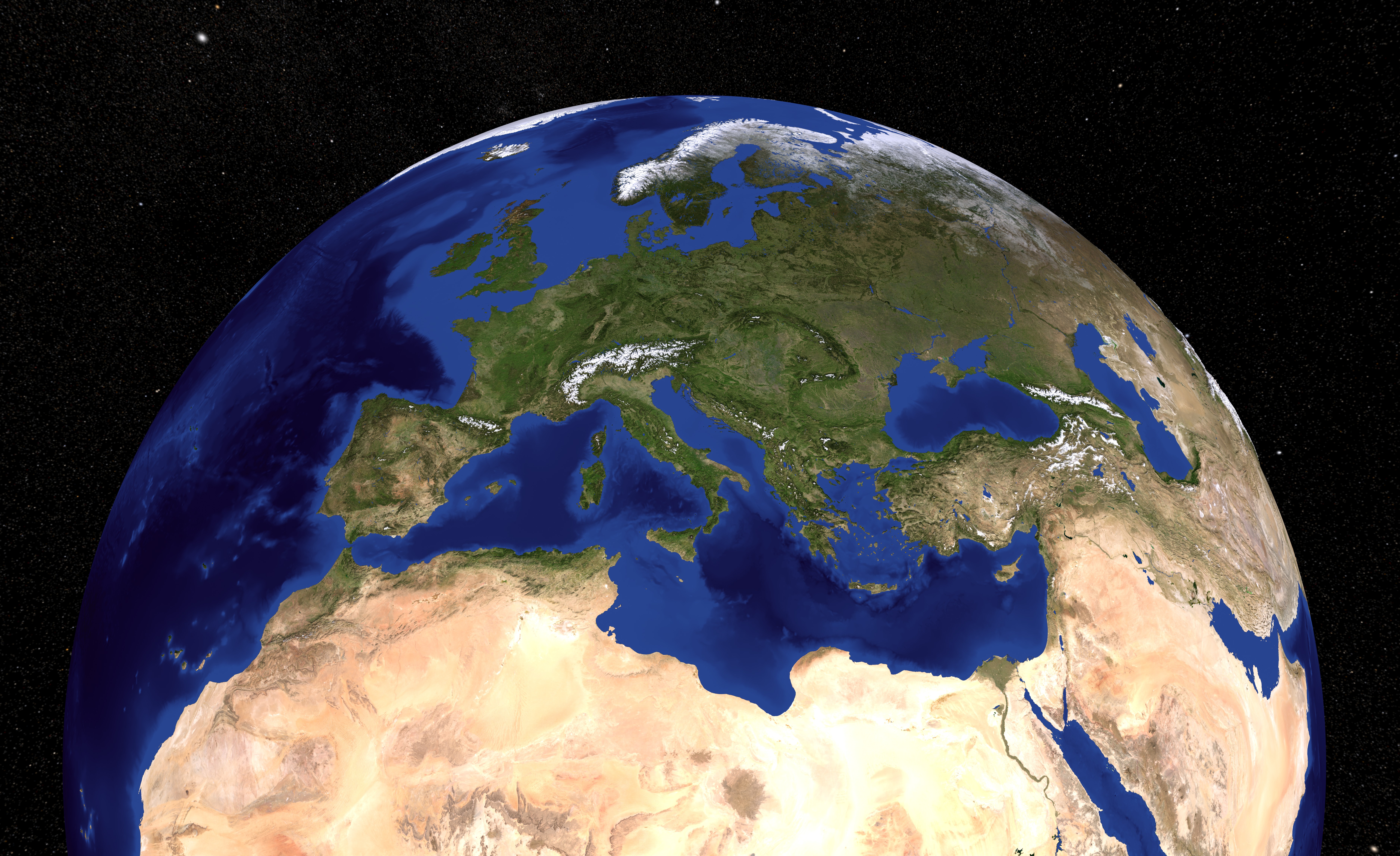 Download Options
This image of the Mediterranian Sea shows that this inland sea is bordered on the north by Europe, the east by Asia, and in the south by Africa. This 969,100 sq. mile body of water is approximately 2,300 miles in length, and has a maximum depth of 16,896 ft. Major subdivisions include the Adriatic Sea, Aegean Sea, Balearic Sea, Tyrrhenian Sea, Ionian Sea and Ligurian Sea. 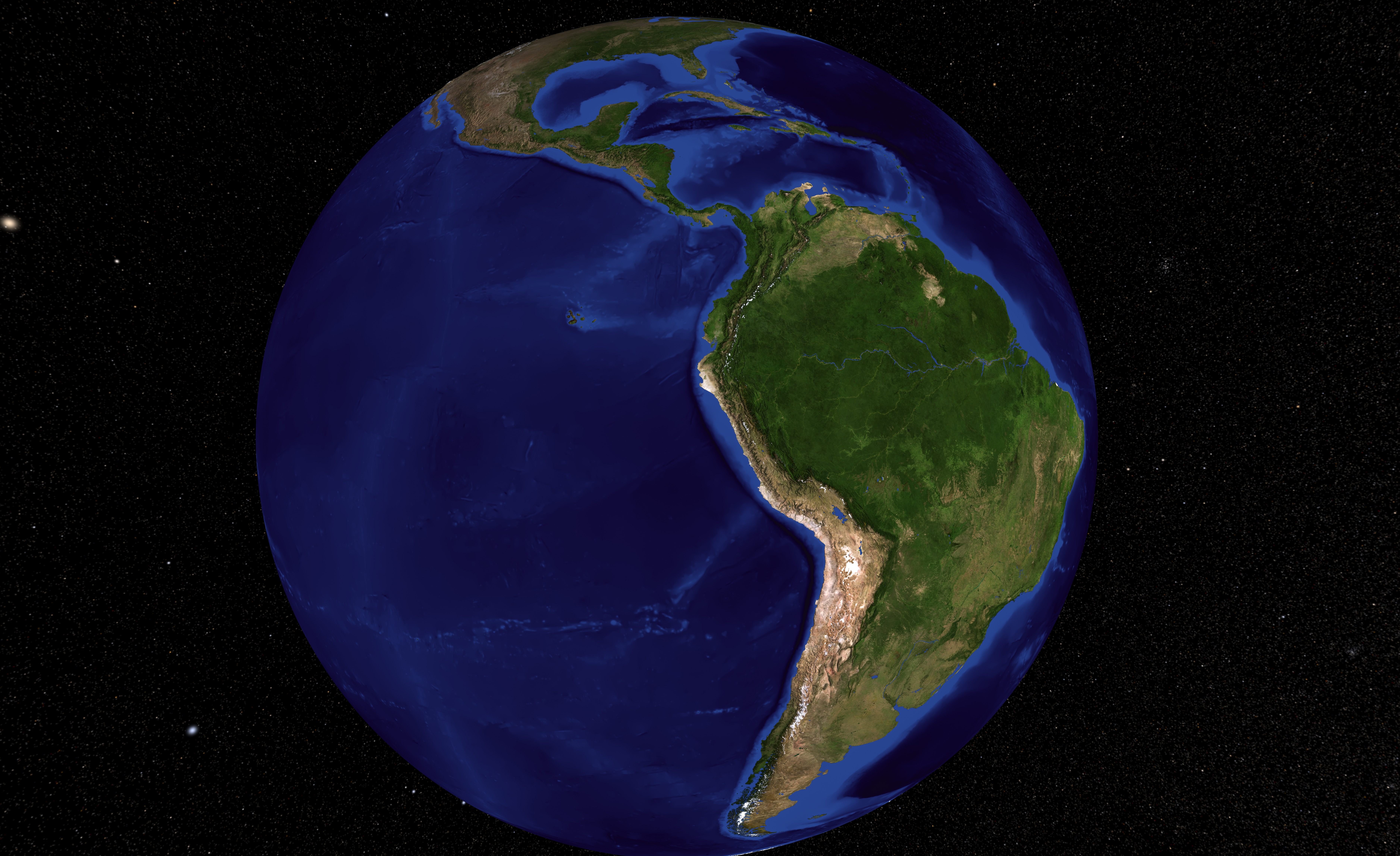 Download Options
South America, the planet's 4th largest continent, includes (12) countries and (3) major territories. It contains the massive Amazon River and surrounding basin - the largest tropical rain forest in the world; the toothy-edged Andes Mountains, that stretch the entire length of the continent, and some of the most diverse and spectacular landforms on the planet. 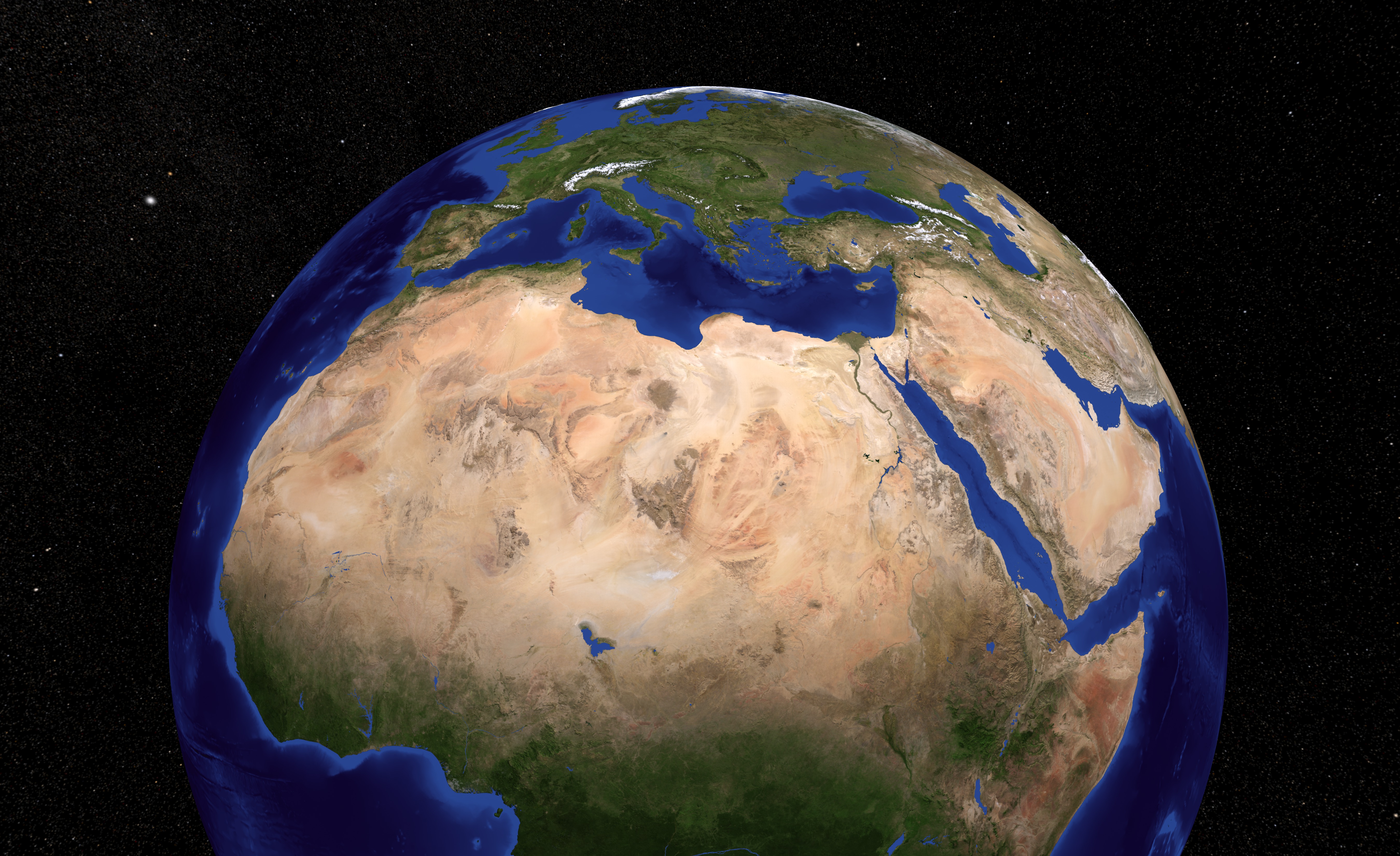 Download Options
This image shows the 3 regions in North Africa: The Sahara, the Sahel, and the Sudan. The Sahel, a word derived from the Arabic 'sahil' meaning shore, is a semi-arid belt of barren, sandy and rock-strewn land which stretches 3,860km across the breadth of the African continent and marks the physical and cultural divide between the continent's more fertile south (the Sudan Region) and Saharan desert north. 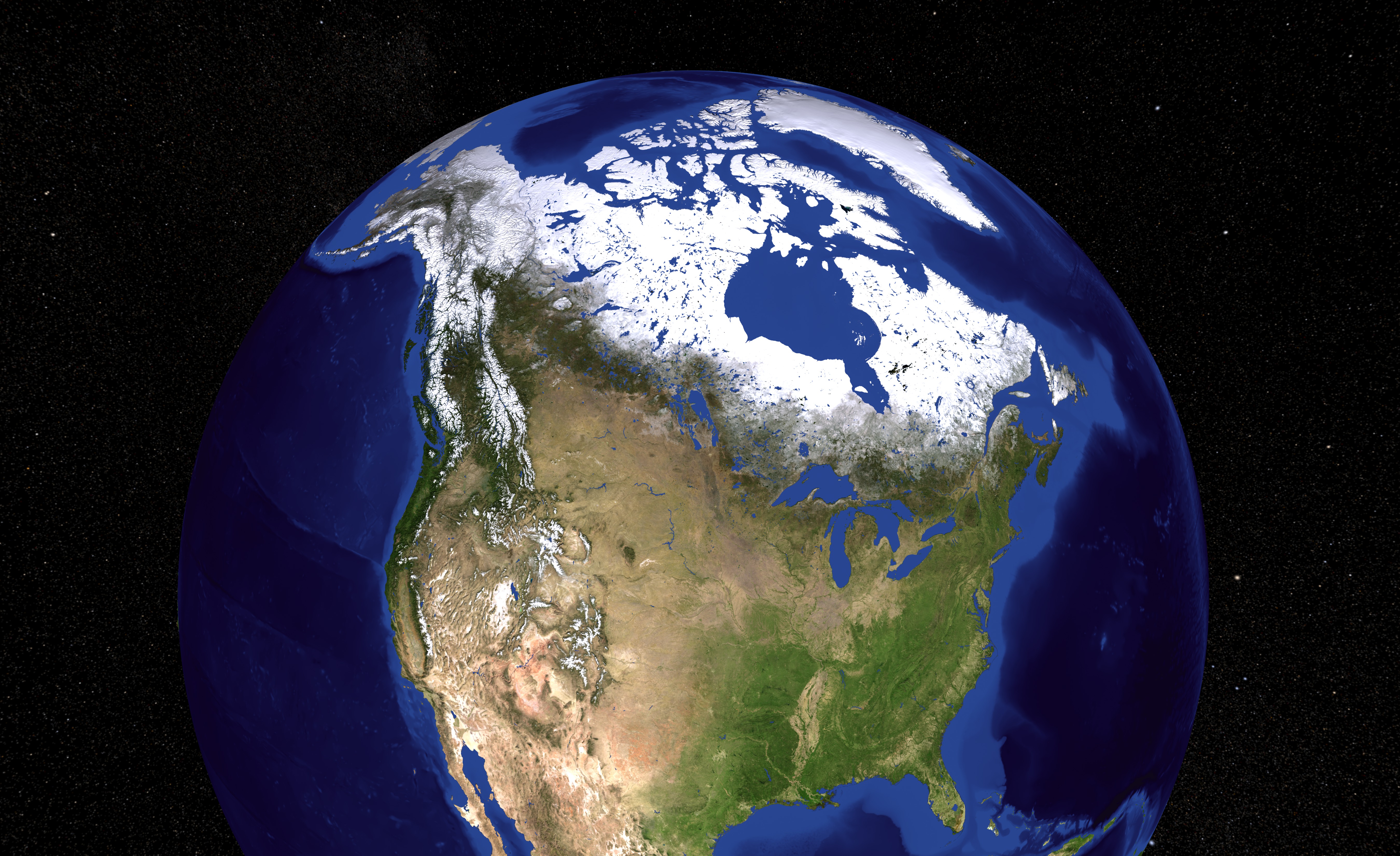 Download Options
This image contains a view of the United States, Canada, and Greenland.

The European continent is separated from Asia by Russia's Ural Mountains, and the Caspian and Black Seas. 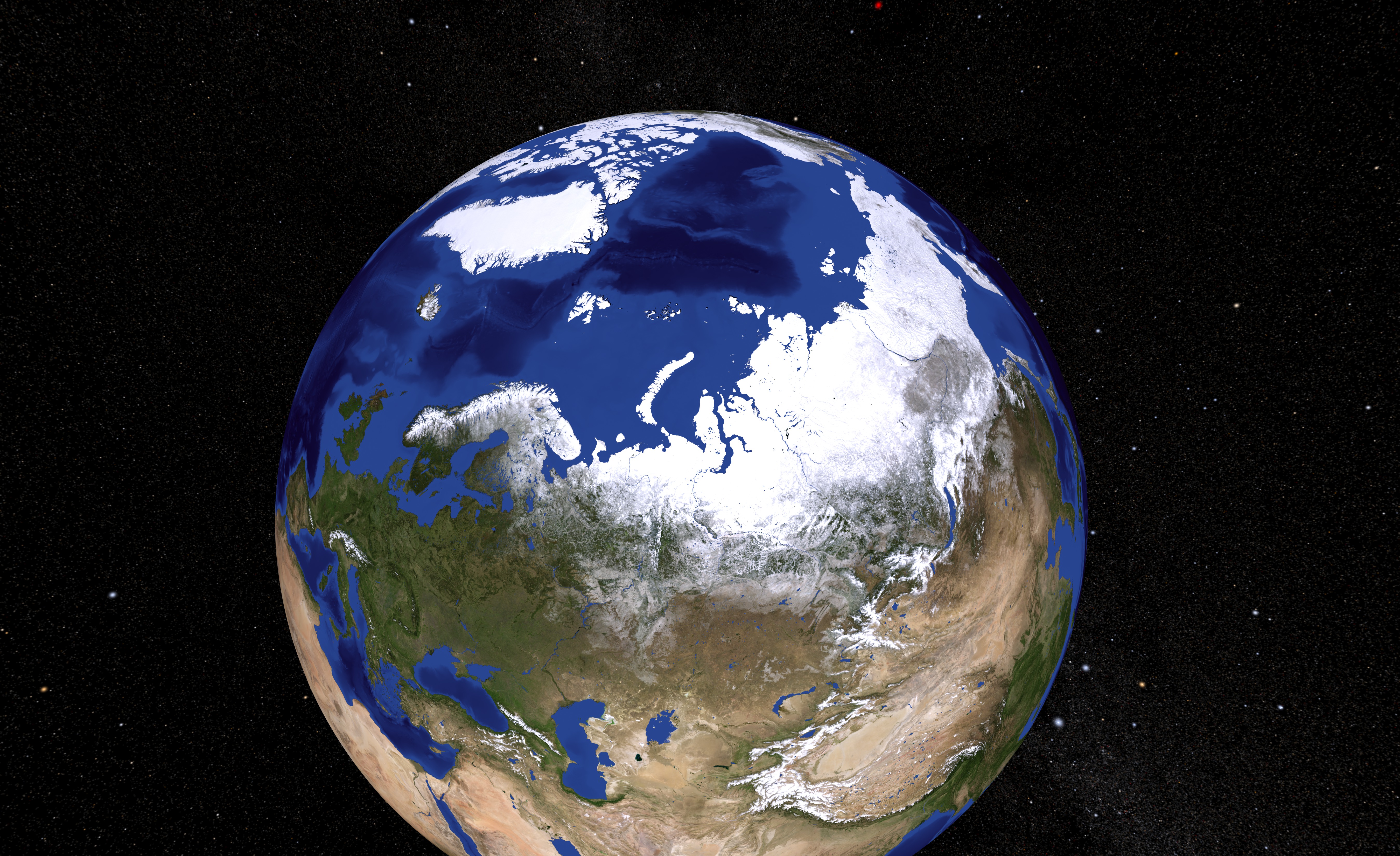 Download Options
This image shows the Arctic. The North Pole is in the middle of the Arctic Ocean. The Arctic Ocean is surrounded by Alaska, Canada, Greenland, and Russia. The ocean is 4000 meters deep. Although it is an ocean, it is water you can walk on. There are 2-3 meter thick ice floes floating on the water at the North Pole. In summer the temperatures are near 0 centigrade and there is light. In winter the temperature is about -30 centigrade and it is dark. 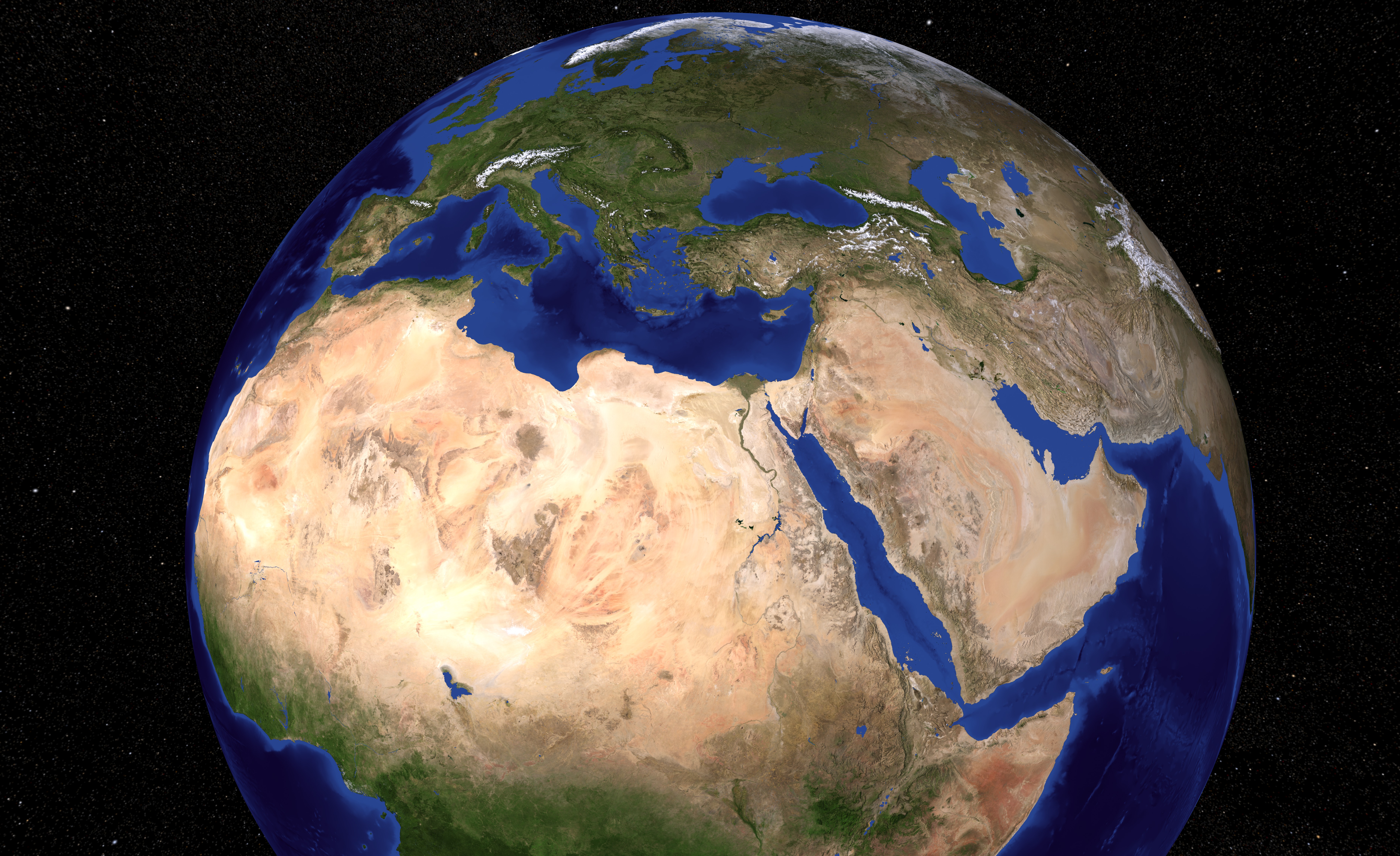 Download Options
North Africa is the northernmost region of the African continent, separated by the Sahara from Sub-Saharan Africa.The Atlas Mountains, which extend across much of Morocco, northern Algeria and Tunisia, are part of the fold mountain system which also runs through much of Southern Europe. 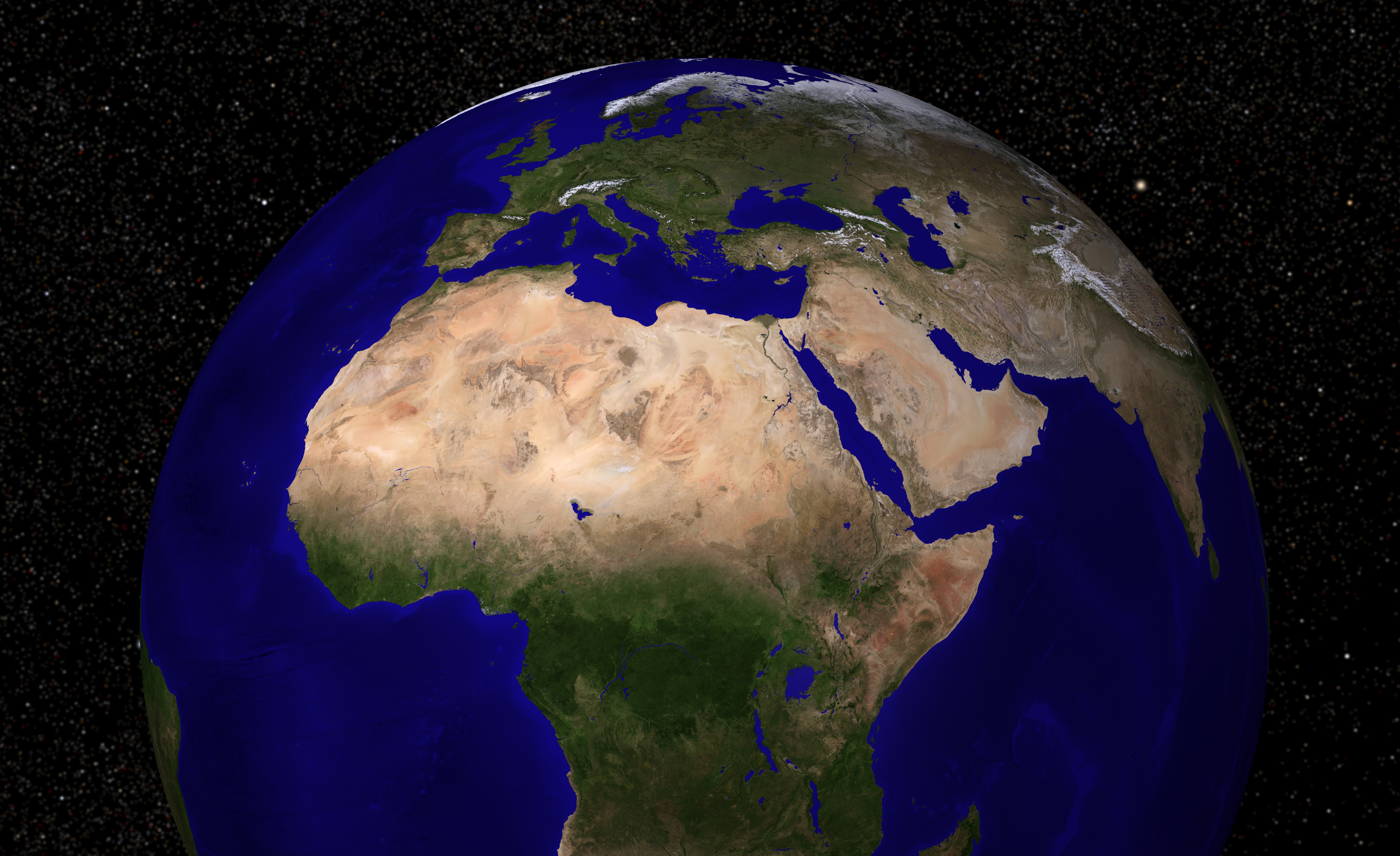 Download Options
This image is of North Africa, Europe, The Middle East, and India.

http://disc.sci.gsfc.nasa.gov/data/datapool/TRMM/01_Data_Products/index.html
view all stories where this data set is used

Database
http://www.rssd.esa.int/index.php?project=HIPPARCOS
view all stories where this data set is used

Mosaic - NASA/GSFC, British Antarctic Survey, USGS EROS Data Center - 12/25/1999 - 12/31/2001
Mosaicing to avoid clouds produced a high quality, nearly cloud-free benchmark data set of Antarctica for the International Polar Year from images collected primarily during 1999-2003.
http://lima.nasa.gov/
view all stories where this data set is used
Note: While we identify the data sets used in these visualizations, we do not store any further details nor the data sets themselves on our site.