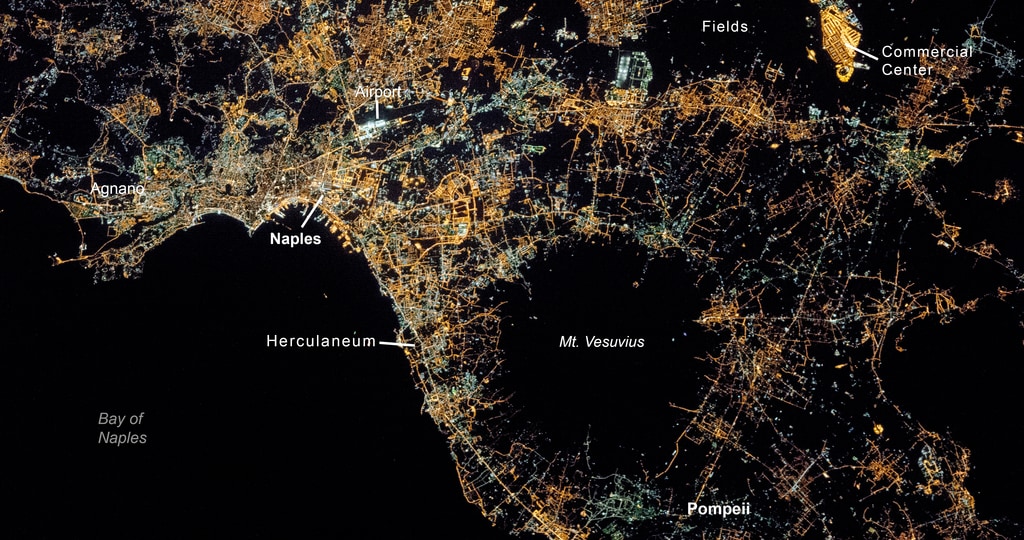 An astronaut onboard the ISS took this photograph of the city lights of Naples and the Campania region of southern Italy on January 30, 2017. The Naples region is one of the brightest in Italy. Roughly three million people live in and around this metropolitan area.

The large black circular area in the photo is Mount Vesuvius, the only active volcano on Europe’s mainland. Although any volcanic activity can endanger surrounding communities, eruptive pyroclastic flows of superheated ash and gas are among the most dangerous, moving at speeds of hundreds of kilometers per hour. Vesuvius has erupted on numerous occasions throughout history. Probably the most famous of those eruptions occurred in 79 A.D., when pyroclastic flows destroyed the cities of Pompeii and Herculaneum, trapping more than 16,000 people. Such historic catastrophes—and the fact that 600,000 people currently live in the immediate vicinity—are why the volcano is one of the most heavily monitored in the world, with several dozen sensors located at many points on and around the cone.

The different colors of lights in the scene reflect some of the history of development in the area. The green lights are mercury vapor bulbs, an older variety that has been replaced in newer developments by yellow-orange sodium bulbs. To the northeast, the lightless gaps between the homes and businesses are agricultural fields. The bright yellow-orange complex amidst the fields is the Consorzio Intercomunale dei Servizi, the largest commercial facility in Europe.