There is a newer version of this story located here: https://svs.gsfc.nasa.gov/30986

Download Options
This yearlong timeseries of NO₂ from OMI run from July 2013 to July 2014.
Download Options
An older sequence of daily images from September 1, 2009 - August 31, 2010, shows the global perspective of tropospheric nitrogen dioxide (NO2) as measured by the Ozone Measuring Instrument (OMI) flying aboard NASA's Aura spacecraft.

Download Options
This is the color bar for the nitrogen dioxide animation. 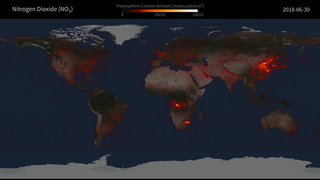