Visualizations by Eric Sokolowsky Released on February 12, 2004
Download Options
This visualization shows the total precipitable water in the atmosphere, indicated by the gray to white cloud-like structures, and predicted precipitation, indicated by gold, during the 1997-1998 El Niño. 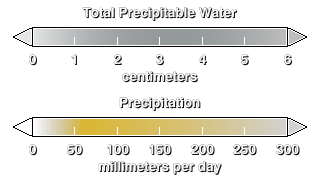