Released on August 4, 2021
Download Options
This visualization shows the new sample of oscillating red giant stars (colored dots) discovered by NASA’s Transiting Exoplanet Survey Satellite. The colors map to each 24-by-96-degree swath of the sky observed during the mission's first two years. The view then changes to show the positions of these stars within our galaxy, based on distances determined by ESA’s (the European Space Agency’s) Gaia mission. The scale shows distances in kiloparsecs, each equal to 3,260 light-years, and extends nearly 20,000 light-years from the Sun.

Download Options
Listen to the rhythms of three red giants in the constellation Draco, as determined by brightness measurements from NASA’s Transiting Exoplanet Survey Satellite. To produce audible tones, astronomers multiplied the oscillation frequencies of the stars by 3 million times. It’s clear that larger stars produce longer, deeper pulsations than smaller ones.

Download Options
The bright red giant Edasich in the constellation Draco is about 12 times larger and 1.8 times the mass of our Sun. Edasich oscillates three times a day, brightening and fading slightly as it does. For comparison, the Sun pulsates about every five minutes. Left: The star’s changing brightness as measured by NASA’s Transiting Exoplanet Survey Satellite. Right: An illustration of the star and its varying brightness.

Download Options
NASA’s Transiting Exoplanet Survey Satellite (TESS) imaged about 75% of the sky during its two-year-long primary mission. This plot dissolves between the TESS sky map and a “mass map” constructed by combining TESS measurements of 158,000 oscillating red giant stars with their distances, established by ESA’s (the European Space Agency’s) Gaia mission. The prominent band in both images is the Milky Way, which marks the central plane of our galaxy. In the mass map, green, yellow, orange, and red show where giant stars average more than 1.4 times the Sun’s mass. Such stars evolve faster than the Sun, becoming giants at younger ages. The close correspondence of higher-mass giants with the plane of the Milky Way, which contains our galaxy's spiral arms, demonstrates that it contains many young stars. 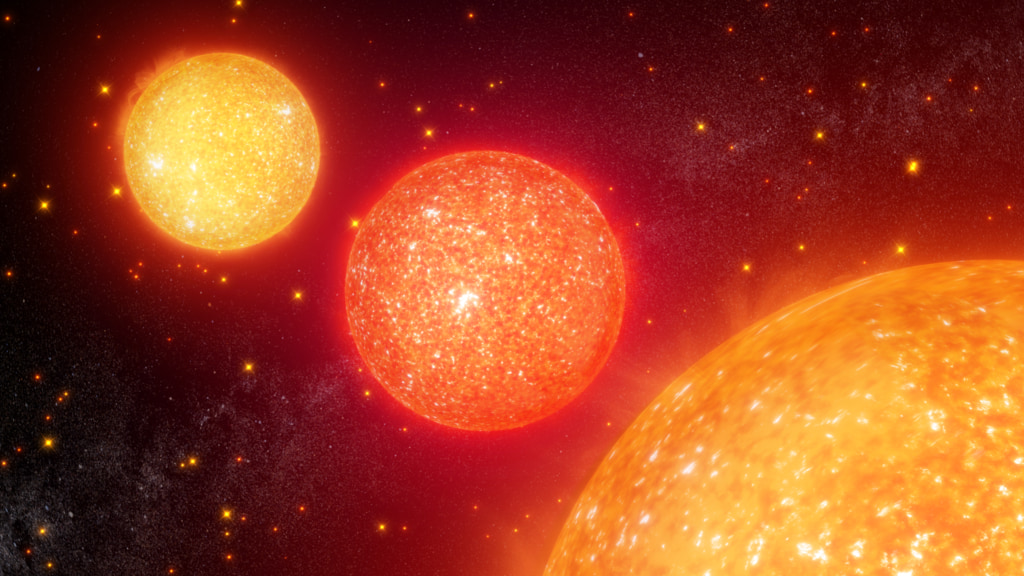 Download Options
Red giant stars near and far sweep across the sky in this illustration. Measurements from NASA’s Transiting Exoplanet Survey Satellite have identified more than 158,000 pulsating red giants across nearly the entire sky. Such discoveries hold great potential for exploring the detailed structure of our home galaxy.

Please give credit for this item to:
NASA's Goddard Space Flight Center.
However, individual items should be credited as indicated above.