Scientists Build a Detailed Image of U Mon Binary

Released on March 12, 2021
Download Options
Two stars orbit each other within an enormous dusty disk in the U Monocerotis system, illustrated here. When the stars are farthest from each other, they funnel material from the disk’s inner edge. At this time, the primary star is slightly obscured by the disk from our perspective. The primary star, a yellow supergiant, expands and contracts. The smaller secondary star is thought to maintain its own disk of material, which likely powers an outflow of gas that emits X-rays.

Note: While this video in its entirety can be shared without permission, its music has been licensed and may not be excised or remixed in other products.

Download Options
U Mon’s primary star, an elderly yellow supergiant, has around twice the Sun’s mass but has billowed to 100 times the Sun’s size. As shown in this illustration, a tug of war between pressure and temperature in its atmosphere causes it to regularly expand and contract. These pulsations create predictable brightness changes with alternating deep and shallow dips in light – a hallmark of RV Tauri systems.

Download Options
Scientists know less about the companion star, but they think it’s of similar mass and much younger than the primary. They suggest that it funnels the gas from the circumbinary disk into its own disk, which heats up and generates an X-ray-emitting outflow of gas, as shown in this illustration.

Download Options
The disk around both stars is composed of gas and dust ejected by the primary star as it evolved. Astronomers estimate it’s around 51 billion miles (82 billion kilometers) across. The binary orbits inside a central gap that is up to about 540 million miles (870 million kilometers) across. When the stars are farthest from each other, about every 6.5 years, they’re roughly aligned with our line of sight. Then, the disk partially obscures the primary and creates a predictable fluctuation in the system’s light. 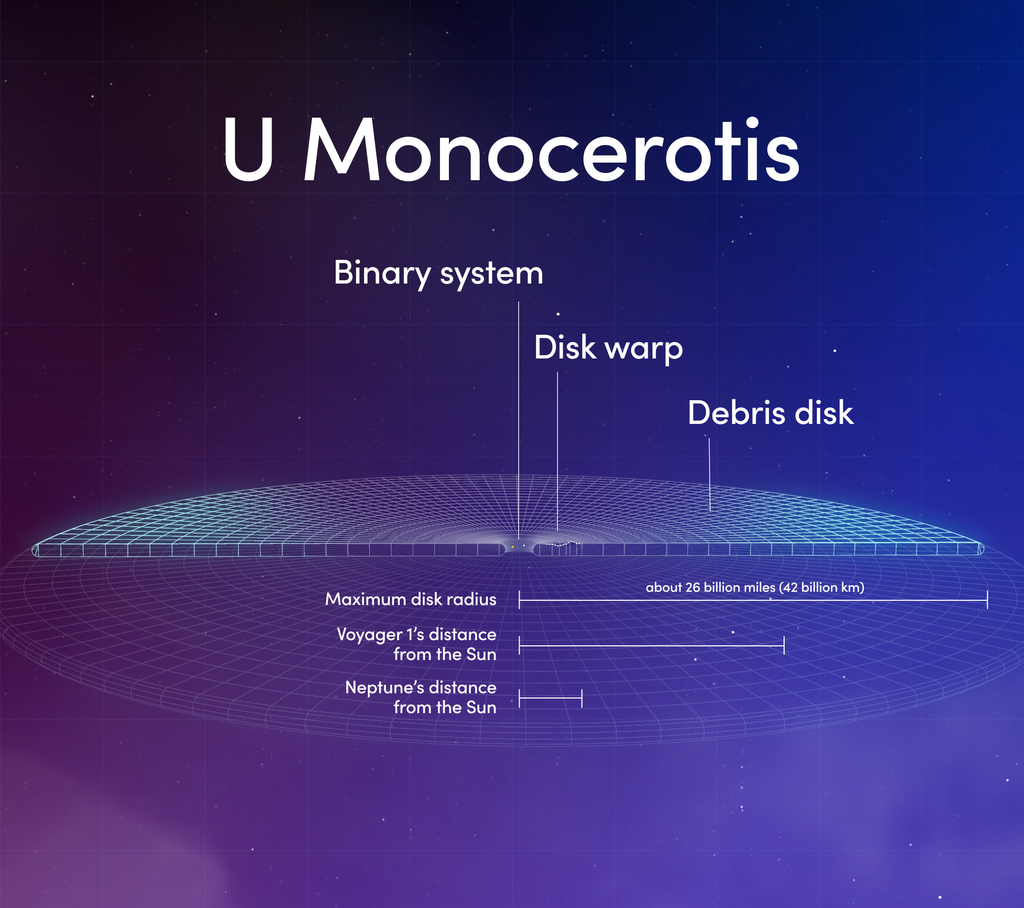 Download Options
This infographic shows U Mon’s components to scale.

This listing includes a Spanish-language version.