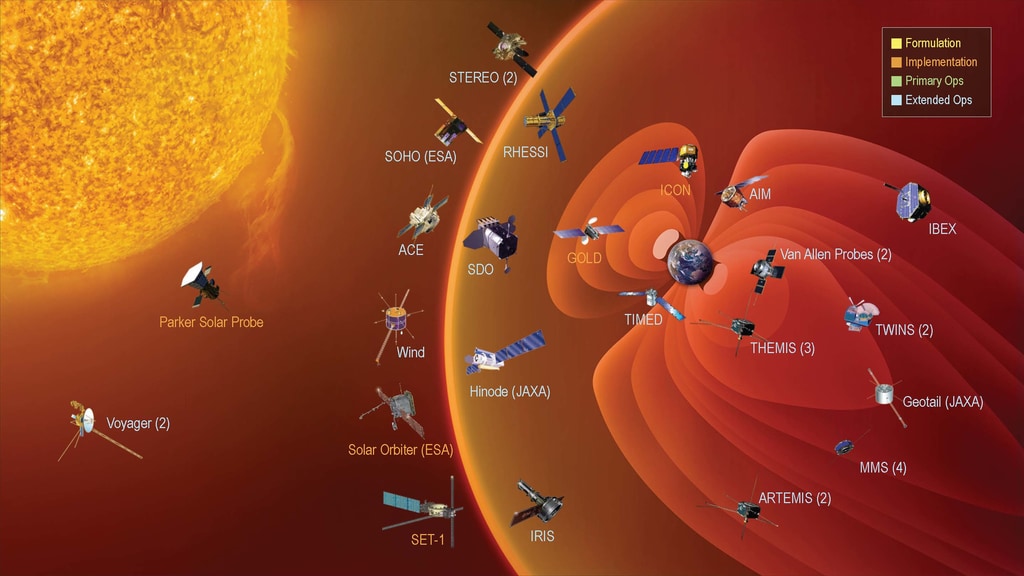 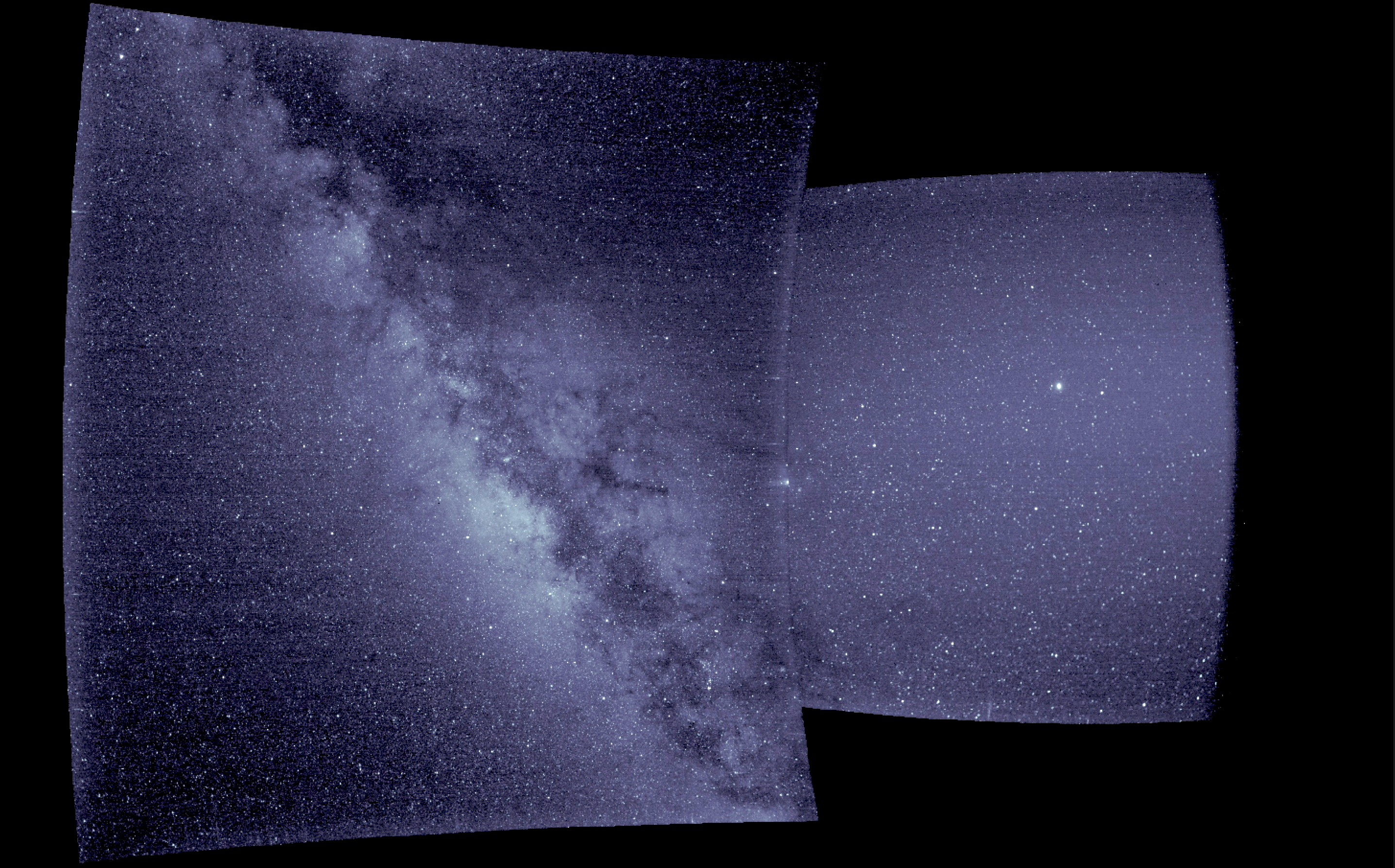 Download Options
First light data from Parker Solar Probe's WISPR (Wide-field Imager for Solar Probe) instrument suite. The right side of this image — from WISPR's inner telescope — has a 40-degree field of view, with its right edge 58.5 degrees from the Sun's center. The bright object slightly to the right of the image's center is Jupiter. The left side of the image is from WISPR's outer telescope, which has a 58-degree field of view and extends to about 160 degrees from the Sun. There is a parallax of about 13 degrees in the apparent position of the Sun as viewed from Earth and from Parker Solar Probe. 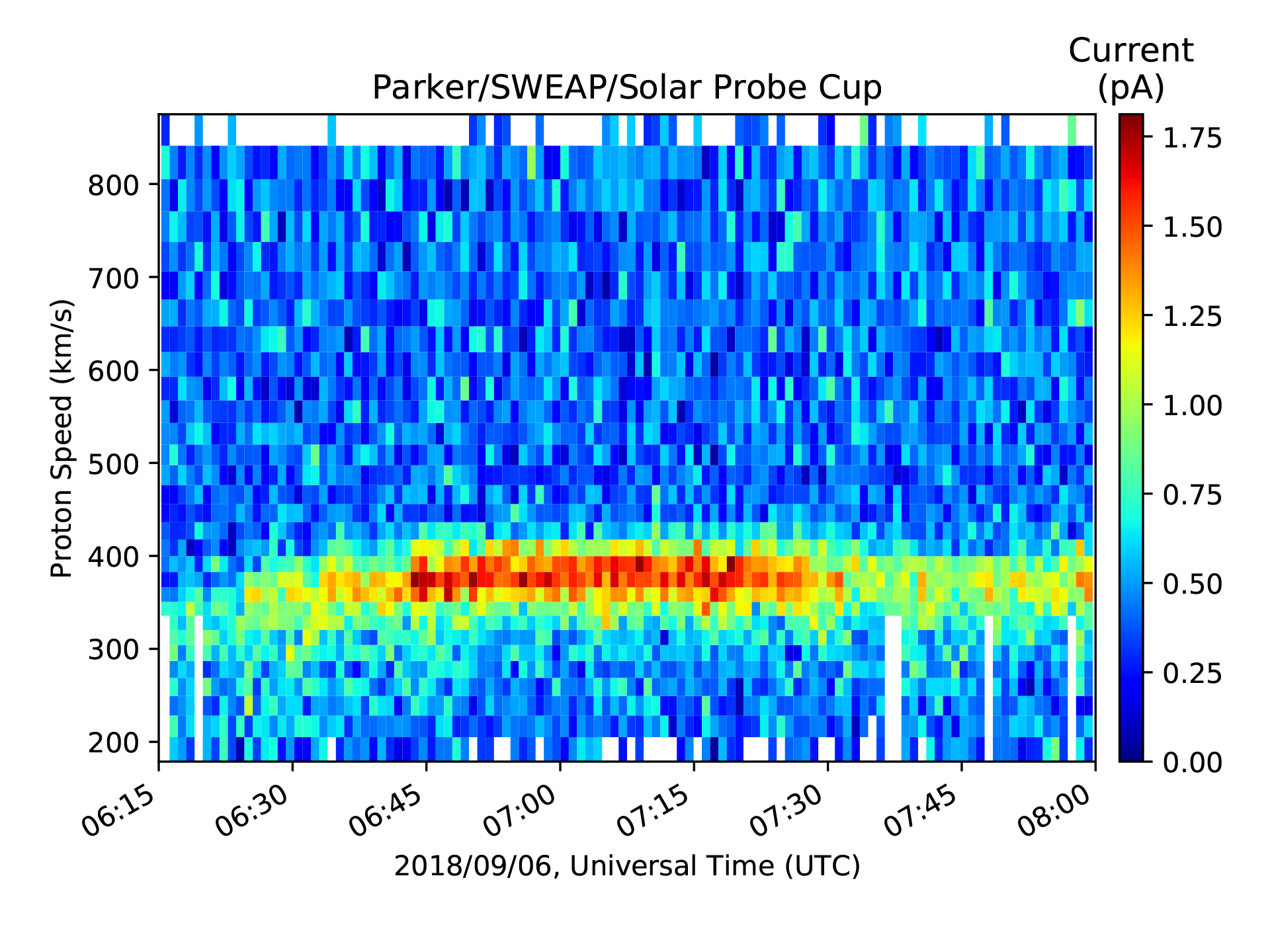 Download Options
Early data from the Solar Probe Cup, part of the SWEAP (Solar Wind Electrons Alphas and Protons) instrument suite aboard Parker Solar Probe, showing a gust of solar wind (the red streak). Credit: NASA/University of Michigan/Parker Solar Probe
Download Options
At its closest approach on Nov. 5, called perihelion, Parker Solar Probe reached a top speed of 213,200 miles per hour, setting a new record for spacecraft speed. Mission controllers at the Johns Hopkins University Applied Physics Lab received the status beacon from the spacecraft at 4:46 p.m. EST on Nov. 7, 2018. The beacon indicated status "A" — the best of all four possible status signals, meaning that Parker Solar Probe was operating well with all instruments running and collecting science data and, if there were any minor issues, they were resolved autonomously by the spacecraft. Credit: APL 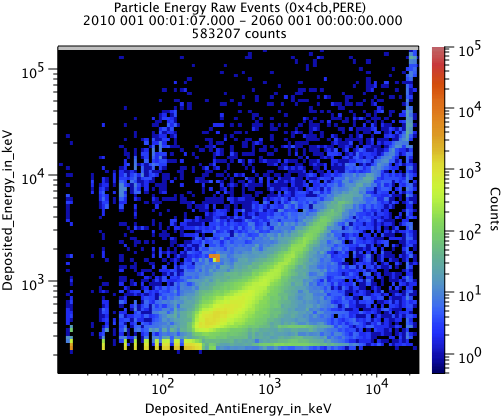 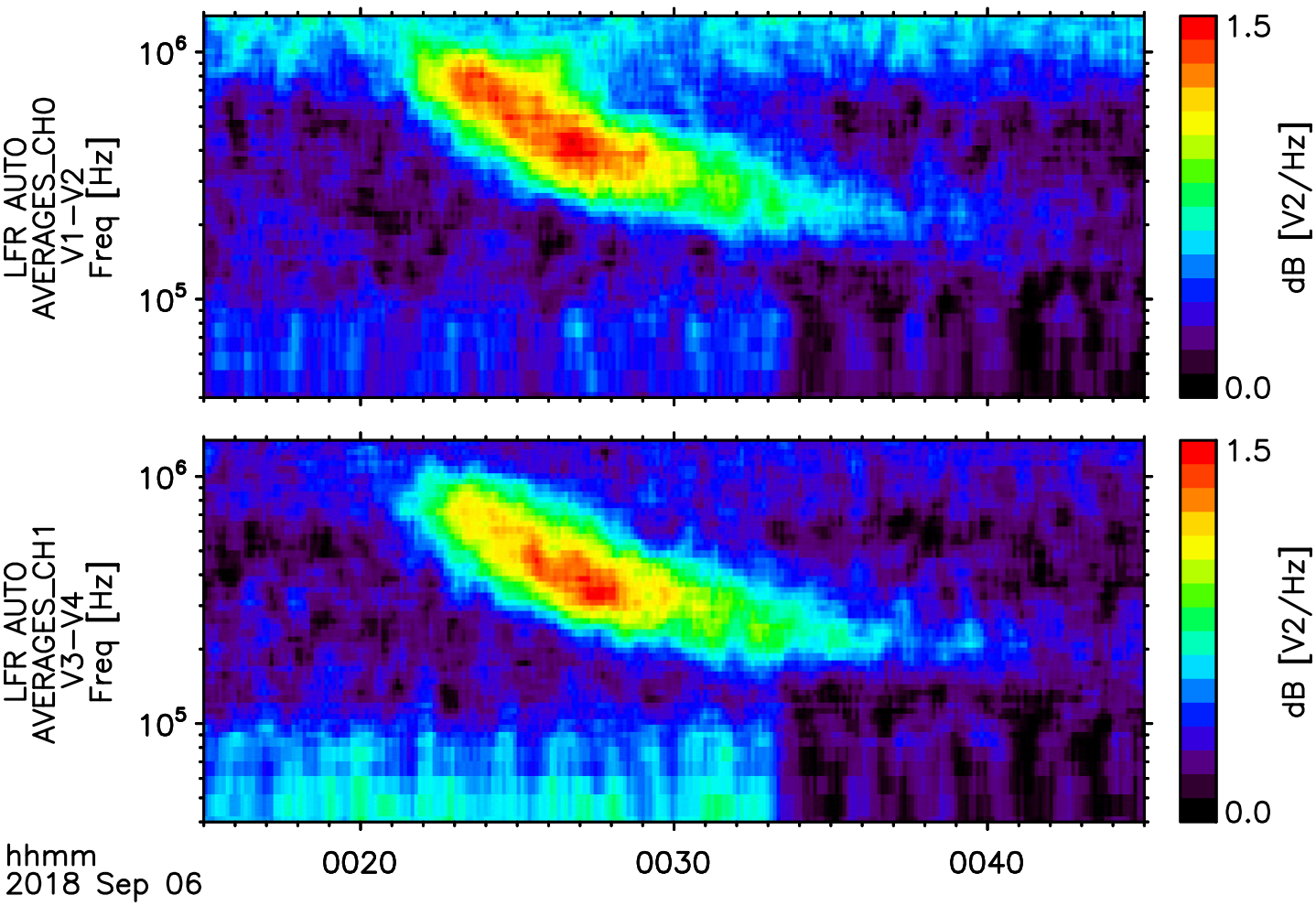 Download Options
This plot was updated on Sept. 21, 2018, to better illustrate the comparison between Parker Solar Probe’s data (center and bottom) and the data from the Wind mission (top). Credit: NASA/UC Berkeley/Parker Solar Probe 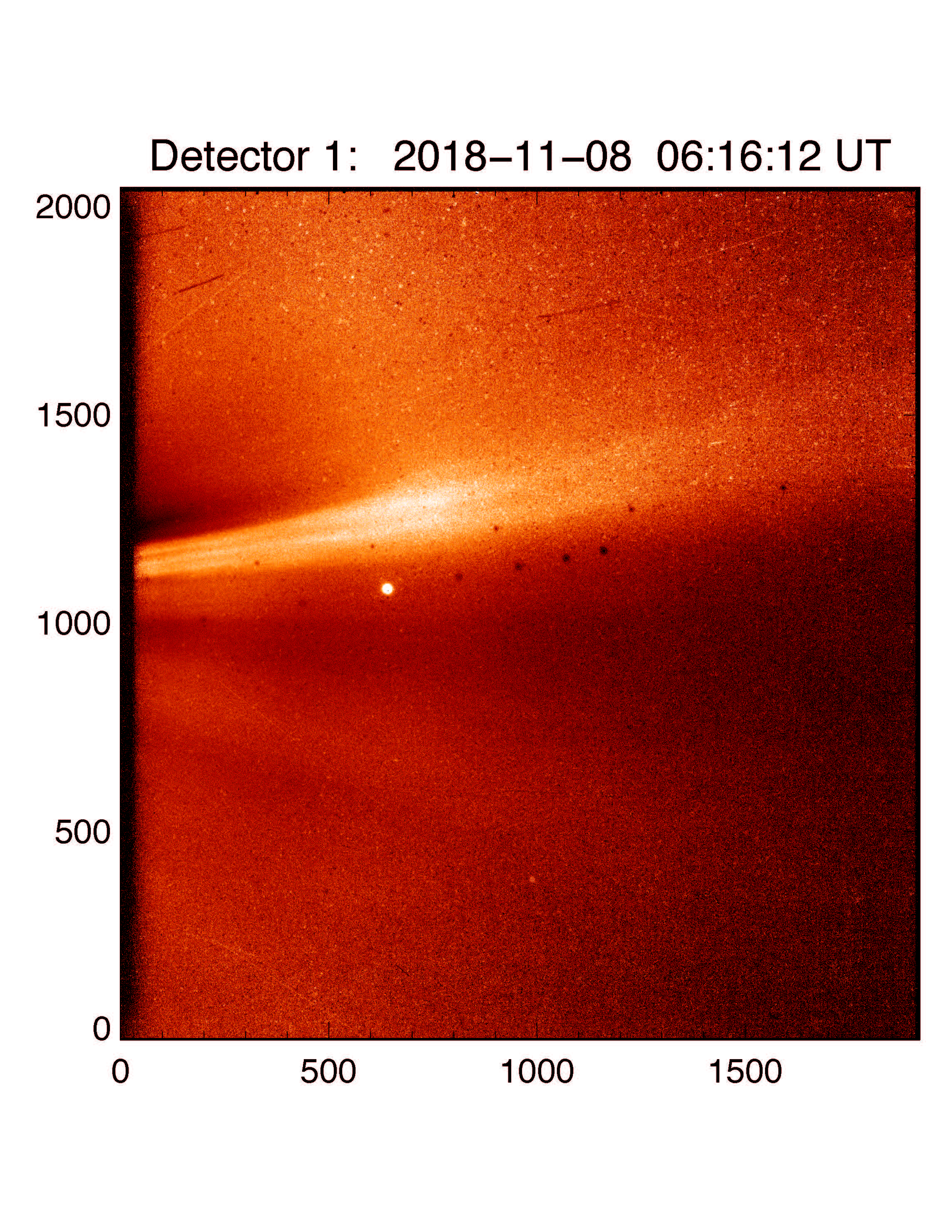 Download Options
This image from Parker Solar Probe's WISPR (Wide-field Imager for Solar Probe) instrument shows a coronal streamer, seen over the east limb of the Sun on Nov. 8, 2018, at 1:12 a.m. EST. Coronal streamers are structures of solar material within the Sun's atmosphere, the corona, that usually overlie regions of increased solar activity. The fine structure of the streamer is very clear, with at least two rays visible. Parker Solar Probe was about 16.9 million miles from the Sun's surface when this image was taken. The bright object near the center of the image is Mercury, and the dark spots are a result of background correction. 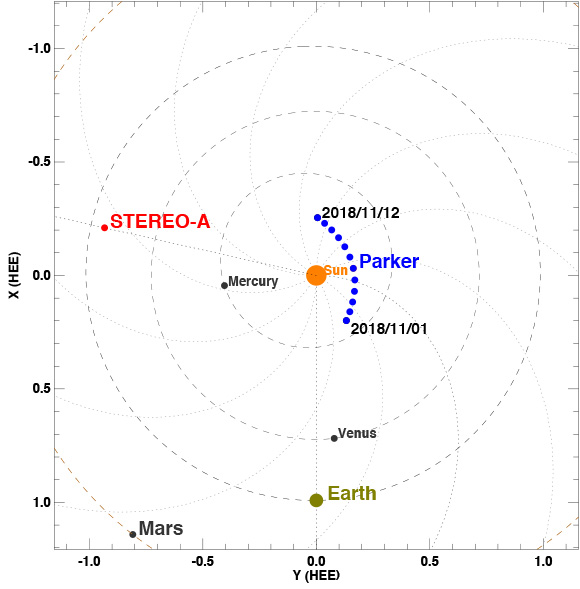 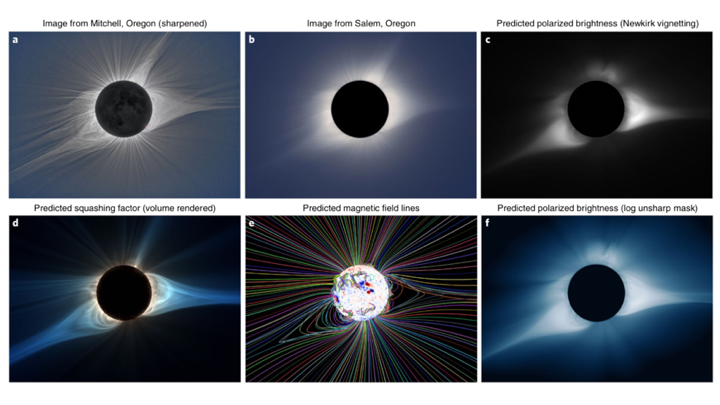 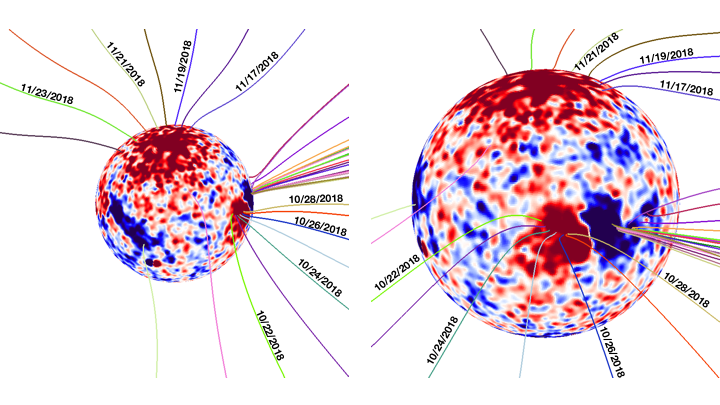