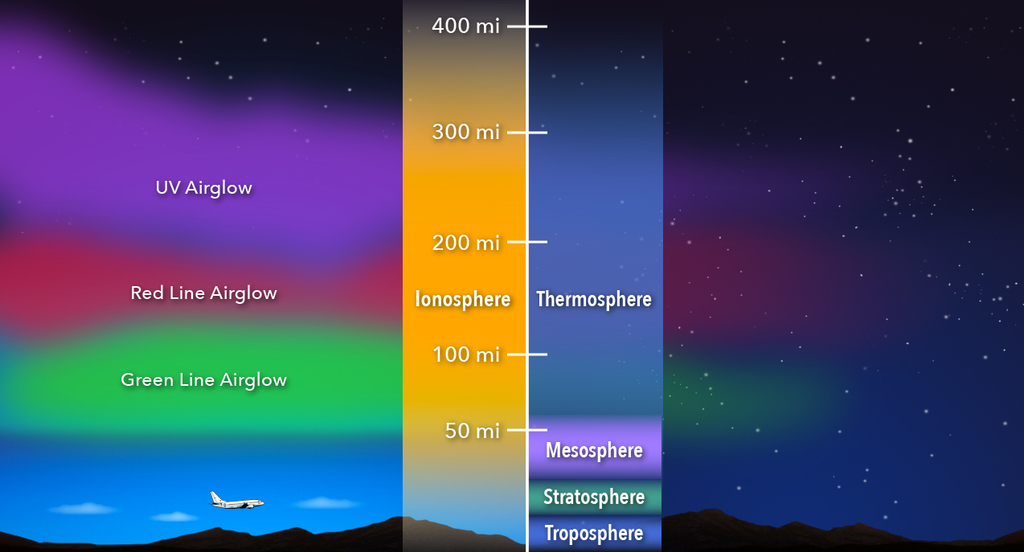 Download Options
Stretching from roughly 50 to 400 miles above the surface, this region, called the ionosphere, is an electrified layer of the upper atmosphere, generated by extreme ultraviolet radiation from the Sun. Understanding the ionosphere’s extreme variability is tricky because it requires detangling interactions between the different factors at play — interactions of which we don’t have a clear picture. That’s where airglow comes in. Airglow occurs when atoms and molecules in the upper atmosphere, excited by sunlight, emit light in order to shed their excess energy. The phenomenon is similar to auroras, but where auroras are driven by high-energy particles originating from the solar wind, airglow is sparked by day-to-day solar radiation.

Airglow carries information on the upper atmosphere’s temperature, density, and composition, but it also helps us trace how particles move through the region itself. Vast, high-altitude winds sweep through the ionosphere, pushing its contents around the globe — and airglow’s subtle dance follows their lead, highlighting global patterns. 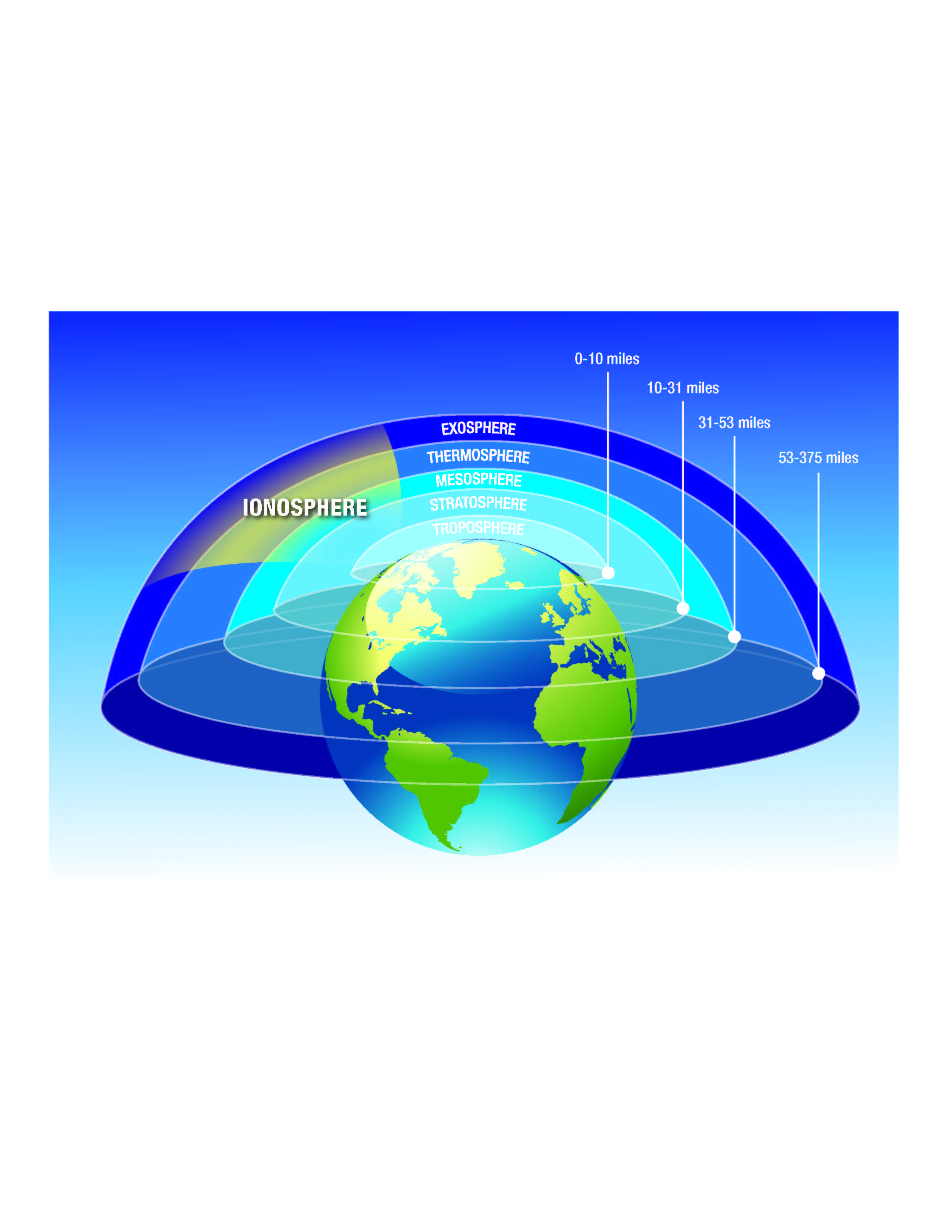 Download Options
Sunlight breaks atmospheric molecules apart, knocking off electrons and leaving behind a sea of charged electrons and ions. This population of electrically charged particles is the ionosphere, and it exists in the same space as the neutral upper atmosphere. 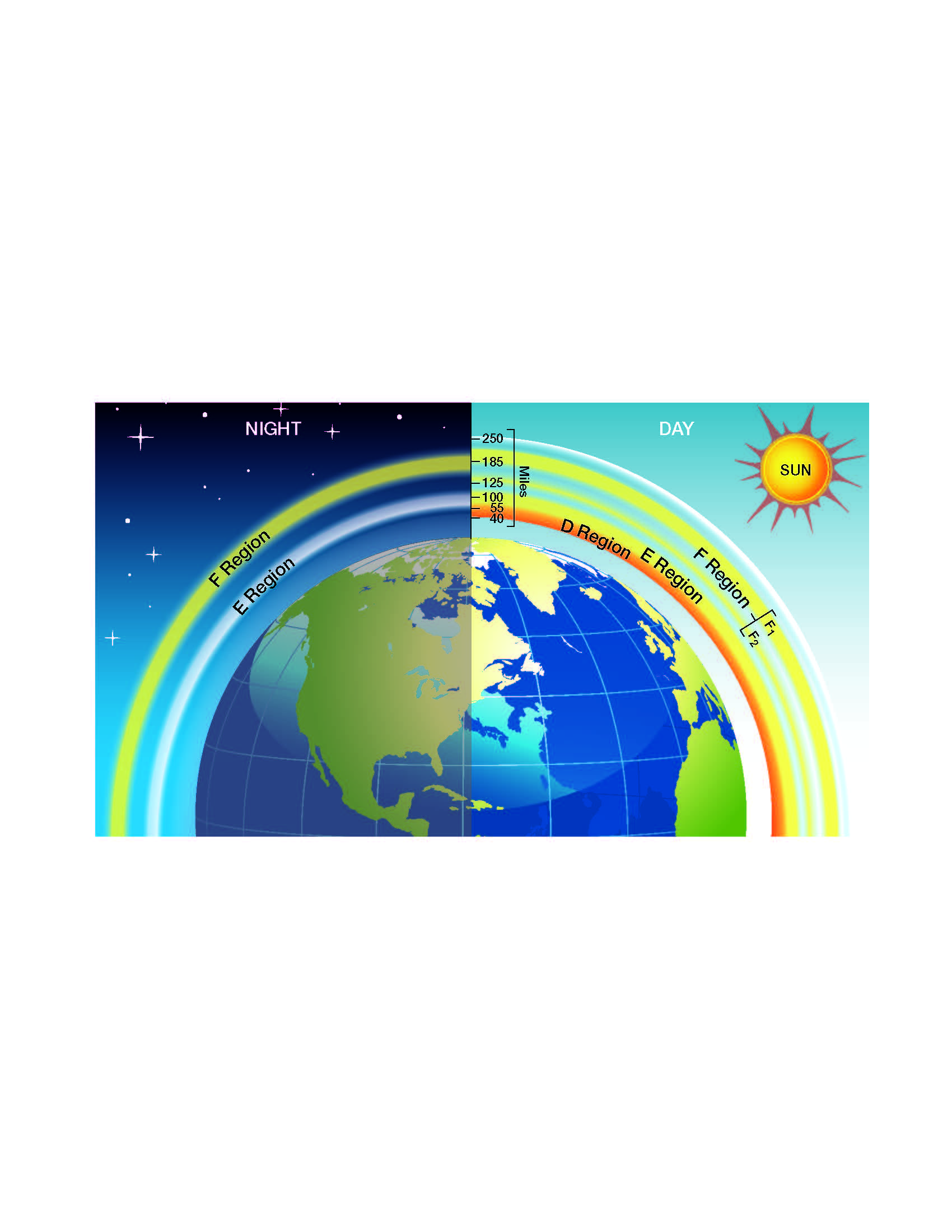 The ionosphere is roughly divided into three altitude regions based on what wavelength of solar radiation they absorb: the D, E and F regions, with D being the lowermost region and F, the uppermost. 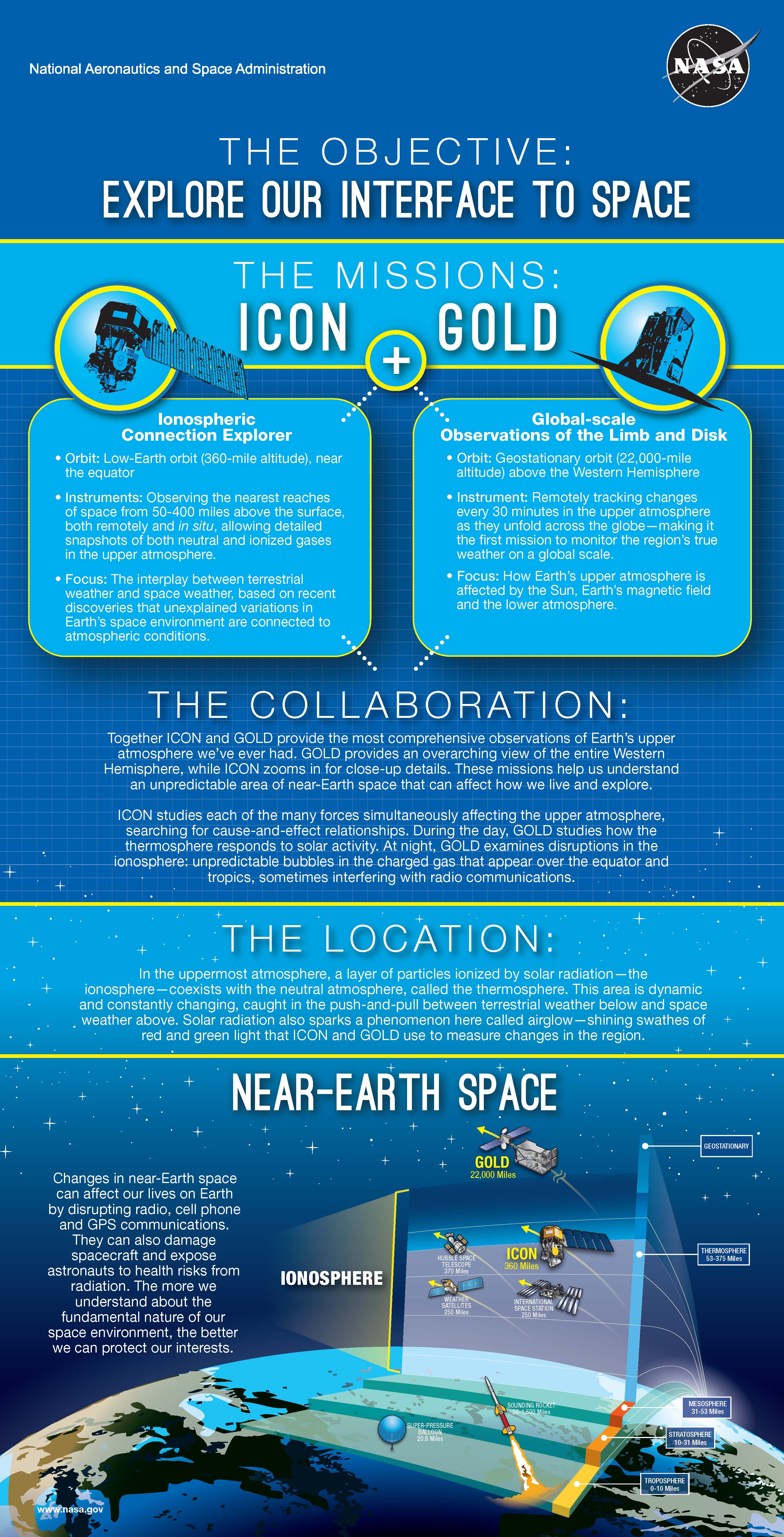 Download Options
ICON and GOLD team up to explore Earth’s interface to space — a little-understood area that’s close to home but historically hard to observe. 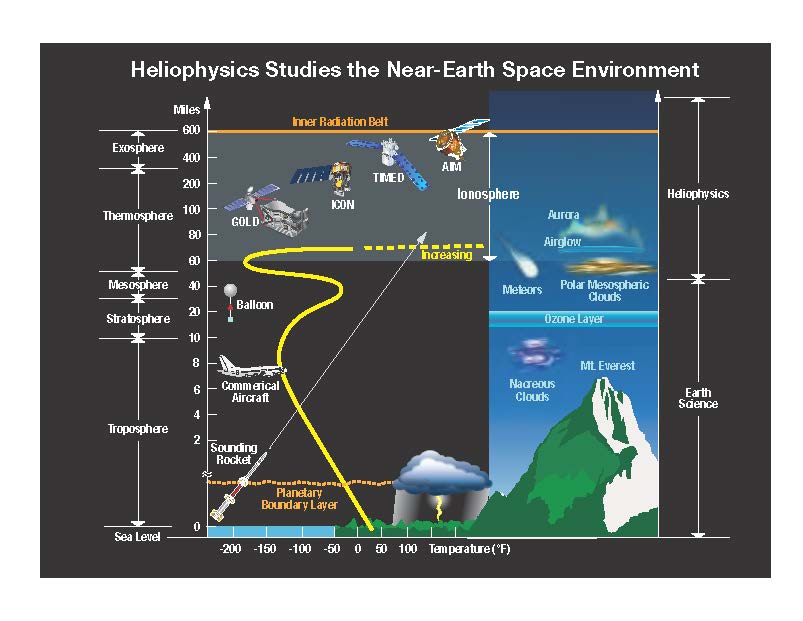 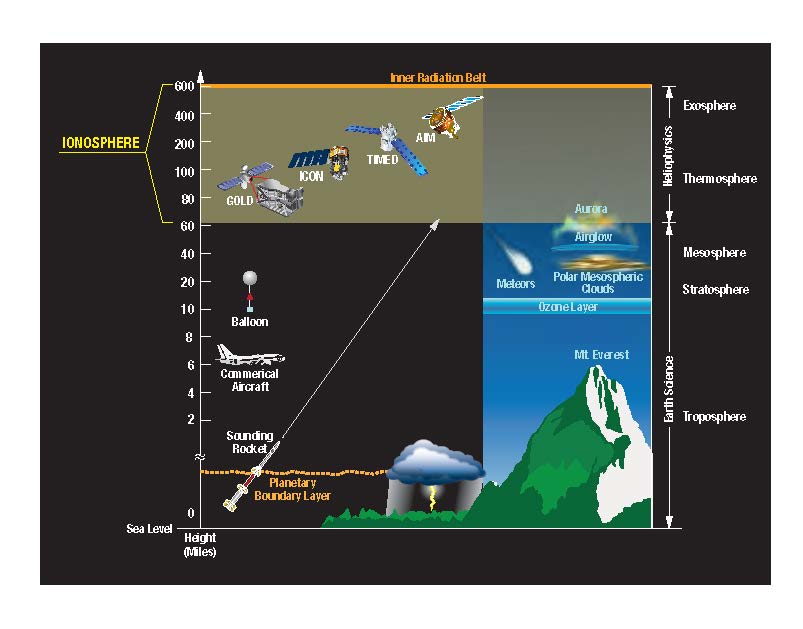 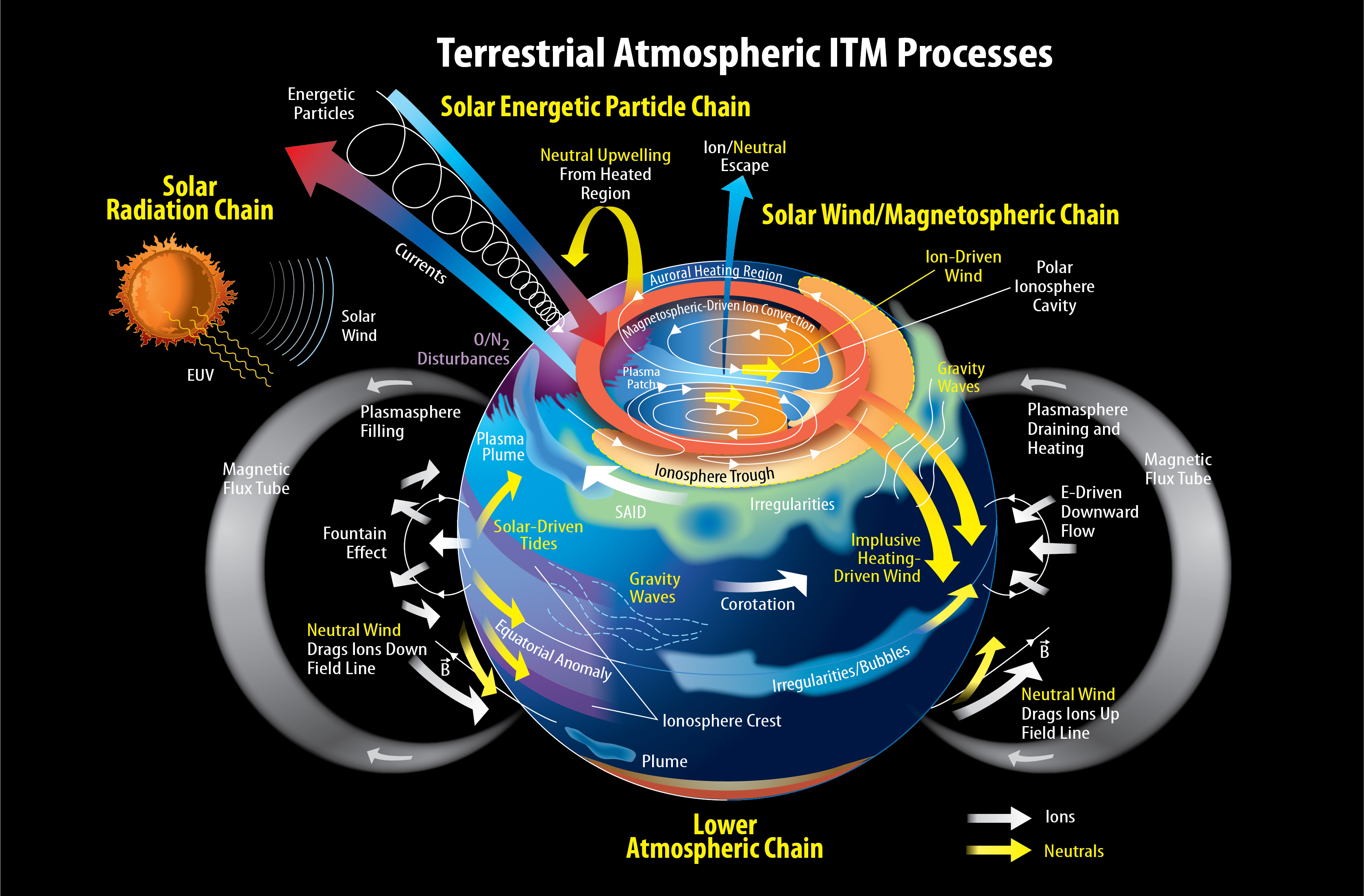 Download Options
This model is an indication of the complexity of the ionosphere-thermosphere-mesosphere (ITM) system of planet Earth and the range of physical processes operating. 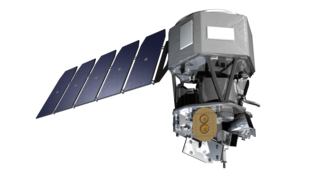