Released on April 19, 2017
Download Options
NASA's fleet of Earth science satellites, along with Earth science instruments on the International Space Station, surveys the whole globe, even the most remote parts that are difficult if not impossible to visit. With instruments in space, scientists can get data for the whole globe in detail that they can't get anywhere else. This visualization shows the NASA fleet in 2017, from low Earth orbit all the way out to the DSCOVR satellite taking in the million-mile view. 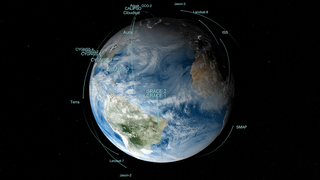 This item is part of this series:
Earth Observing Fleet