Released on March 25, 2015
Download Options
LEAD: Instruments aboard NASA satellites are able to track the winter ice growth and retreat across the Great Lakes.

3. It was the second most extensive ice cover of the past 40 years of satellite observations.

TAG: The ice in eastern Lake Superior reached a thickness of three and a half feet, which disrupted shipping routes. 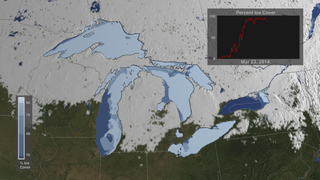