On Feb. 11, the Core Observatory was moved into the spacecraft fairing assembly building and into the Encapsulation Hall. Final inspections and preparations were completed for the installation into the fairing, which began on Feb 13. The fairing is the part of the rocket that will contain the spacecraft at the top of the H-IIA rocket.

The encapsulation process for the H-IIA is very different than for most U.S. rockets. For U.S. rockets, the fairing is usually in two pieces that close around the payload like a clamshell. To install the GPM Core Observatory into the fairing of the H-IIA rocket, first the Core Observatory and the Payload Attach Fitting (PAF) are set up in scaffolding in the Encapsulation Hall. Then, the fairing is lifted above and lowered onto the fitting. When only a few feet remain above the final position, stanchions support the fairing while technicians go inside to complete the electrical connections. When this is completed, they remove the stanchions and lower the fairing to its final position, where it is bolted in place. 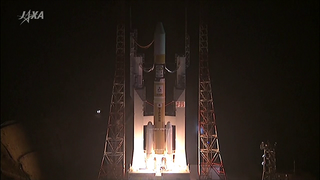