Released on November 11, 2011
Download Options
Asteroid 2005 YU55 whisks through the field of view of Swift's Ultraviolet/Optical Telescope (UVOT) on Nov. 9, just hours after the space rock made its closest approach to Earth. The video plays on a background image from the Digital Sky Survey that shows the same region, which lies within the Great Square asterism of the constellation Pegasus (times UT). 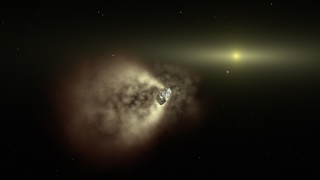